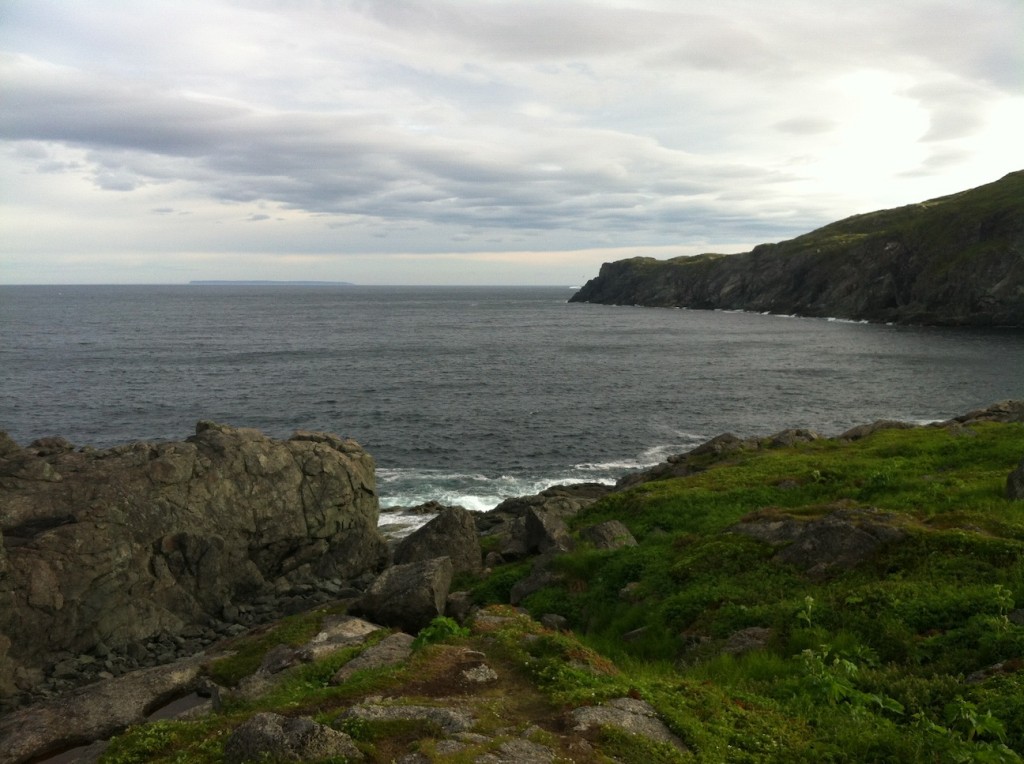 So, where were we? Oh, yeah, Labrador, about to get on the ferry to Newfoundland.

And, yes, I’m well aware that it’s been months and months since the last dispatch, even more months since I was actually in Labrador and/or Newfoundland. But I’ve had shit to do, you know? Like re-electing the President and saving America’s ass and stuff like that. Do you think it was easy tricking Karl Rove and Mitt Romney into believing that most Obama voters were people like me, who live in vans and drink too many beers and would probably be too drunk to vote on Election Day? No, that took a lot of time and effort. And they bought it, which is why they were so shocked to discover that millions of people didn’t actually think electing a craven sociopathic gajillionaire was a good idea. So, you’re welcome. Enjoy that health insurance I got you. And also the war with Iran we won’t be having.

But enough about me and what a hero I am. Let’s talk some more about when I was just an incredibly attractive guy who’d bravely driven three days without benefit of pavement and then took the vehicle containing all his worldly possessions onto a bucking ferryboat – a huge cruise ship-sized vessel —  for a two-hour ride across the Labrador Straits in a semi-gale, turning the whole thing into a 120-minute rollercoaster ride of sliding tables, chairs and screaming children. Lesser men would have puked. None of them were on board, though. Everyone here was drinking beer and laughing their asses off.

This is how I arrived in Newfoundland, slightly woozy. Most people come to Newfoundland from the south, via Nova Scotia,. Then they take the impeccably maintained multi-lane highway to St. John’s (a nine-hour drive, by the way, Newfoundland is WAY bigger than you think), wander up the western coast and then, finally, get to the remote northern fishing villages where Leif Erickson and the Vikings first landed  and called the place Vinland– 500 years before Columbus landed at Club Med and invented the first gated community. Since there weren’t any villages in Vinland to pillage, the Vikings just built their own, got drunk and stayed. Now tourists go there to see whales and icebergs and people catching lobster with their teeth. (Okay, that last one may not be a real thing). Basically, I’d come in the back door. 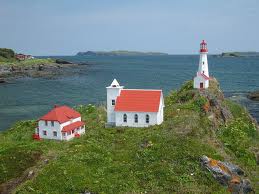 So, instead of the impeccably-maintained multi-lane highway, my introduction to Newfoundland was these little two-lane winding roads looping from one inlet to the next, little villages marked by blue and white wooden houses, giant piles of communal firewood, stacked up in advance of the next winter and hundreds of roadside gardens, full of flowers and assorted vegetables and marked off by flimsy wire to discourage the moose from walking all over them. No one ever steals anyone else’s firewood or produce. So there are no locked gates, no warning signs. If it’s not yours, you leave it alone. They are trusting people, the Newfoundlanders.

But the cloudberries (also known as bakeberries, a bitter orange version of a blackberry, kind of) are fair game, as are the moose, which are everywhere and quite a nuisance. Newfoundland, as you surely know because you are not idiots, is a big-ass island, 42,000 square miles of island, 25 miles south of Labrador and about 100 miles east of Nova Scotia. So moose are not a native species, because they do not surf.

But in 1904, a few geniuses thought it might be a good idea to bring in four (count em) moose from Manitoba, let them loose in the woods and then, you know, have mooseburgers to go along with those damned cloudberries. Except it turns out that the moose reproduced faster than they got eaten. Now the island is overrun with them. There are moose detector motion sensors on the highways, which may or may not actually work.  There are now more than 150,000 moose in Newfoundland and there are only 500,000 people. And neither species travels particularly well after dark, the moose because they’re half-blind and clumsy, the Newfoundlanders because they are, well, half-blind and clumsy, but that’s because they’re usually drunk. Here’s a traditional Newfoundland joke I just made up: “Hey, Paddy, what’s the only thing Newfies run into more than moose?” “I don’t know, Mick, what? “Bars.” 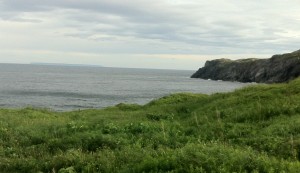 Which is to say that I adore Newfoundland, top to bottom, east to west,  dimly-lit pub to dimly-lit pub. I’ve never been to Ireland, but because I’ve been to Newfoundland, I don’t feel like I need to go. This is a place where people are friendly, loquacious and full of whiskey. They are huggers, the Newfoundlanders, big, smelly huggers. They also sound more Irish than Canadian (Anthony is pronounced Antony, for instance) and they really, really hate Canadians, which is what they call those bastards on the mainland. Newfoundland was an independent colony until 1948, when they voted for “confederation” in an election so close it made Bush-Gore look like a landslide. Some locals still refuse to recognize the result.  If you are from Newfoundland (that’s New-found-LAND, not Newfundlund) then you are not Canadian, you’re a Newfoundlander. They remind me of Texans in that way.

They are like this because they live on an island but also because, let’s face it, they killed off a lot of the other people who used to live on the island, including the original natives and then a fair number of the French and Spanish and Portuguese explorers who came along later. They’re the descendants of pirates and smugglers, basically (which is why they drink a lot of rum. No, really, they do.) They’re loud and raw and often completely full of shit. They also remind me of Texans in that way.

Someone on the ferry had mentioned that there was a huge iceberg floating near St. Anthony (remember, “Antony”) off the far northern peninsula and visible from the lighthouse. I thought there was a chance they were  exaggerating and, at best, it might be a little white spot on the horizon, the melting remnant of something that used to be impressive.

Uh, no. This thing rose 250 feet above the water and was as big around as a city block. And, no, I was not drunk (yet). That came later. First at what I believed to be the only open bar in town, the Royal Canadian Legion Hall, which is a sad metal building on the non-scenic side of town. There was one drunk old guy at a stool (no, not me) a couple of video poker games and a sign explaining that to become an honorary Newfoundlander you’d have to be Screeched, to drink the local rum and also kiss a cod. I did one of those things. I got a ribbon. I also found out there was another bar. At The Haven Inn. 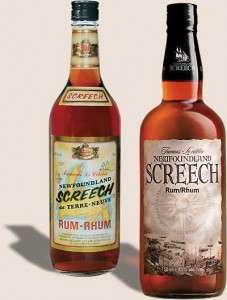 Which was also, on first glance, an incredibly depressing place, a bare, harshly-lit room off the hotel lobby with even more Video Lottery games, a half-dozen of them, all of which were occupied by people who were piling in an alarming number of two-dollar coins. The bartender, who was also the motel clerk – she could see the check-in desk and the bar equally well from her chair – would occasionally cash in the winnings. Which were, I shit you not, often hundreds and hundreds of dollars. These people were not drunken losers. They were gambling geniuses. They bought me drinks. They gave me hugs. Have I mentioned how much I loved Newfoundland?

They also suggested I should get even closer to the iceberg. So, for $40, I got a seat on the Northland Discovery whale-watching boat, which would take us on a three-hour tour. Yeah, nothing ominous about that.

The area off St. Anthony is called Iceberg Alley (and there is indeed an Iceberg Watching website) because the currents conspire to send most of the broken pieces of the Arctic Ice Shelf right through there. Other places may claim that “You Can See The End of The World From Here” but St. Anthony might actually be the best place for a seat. Your melting glacial harbingers of doom  come floating by here on a regular basis. 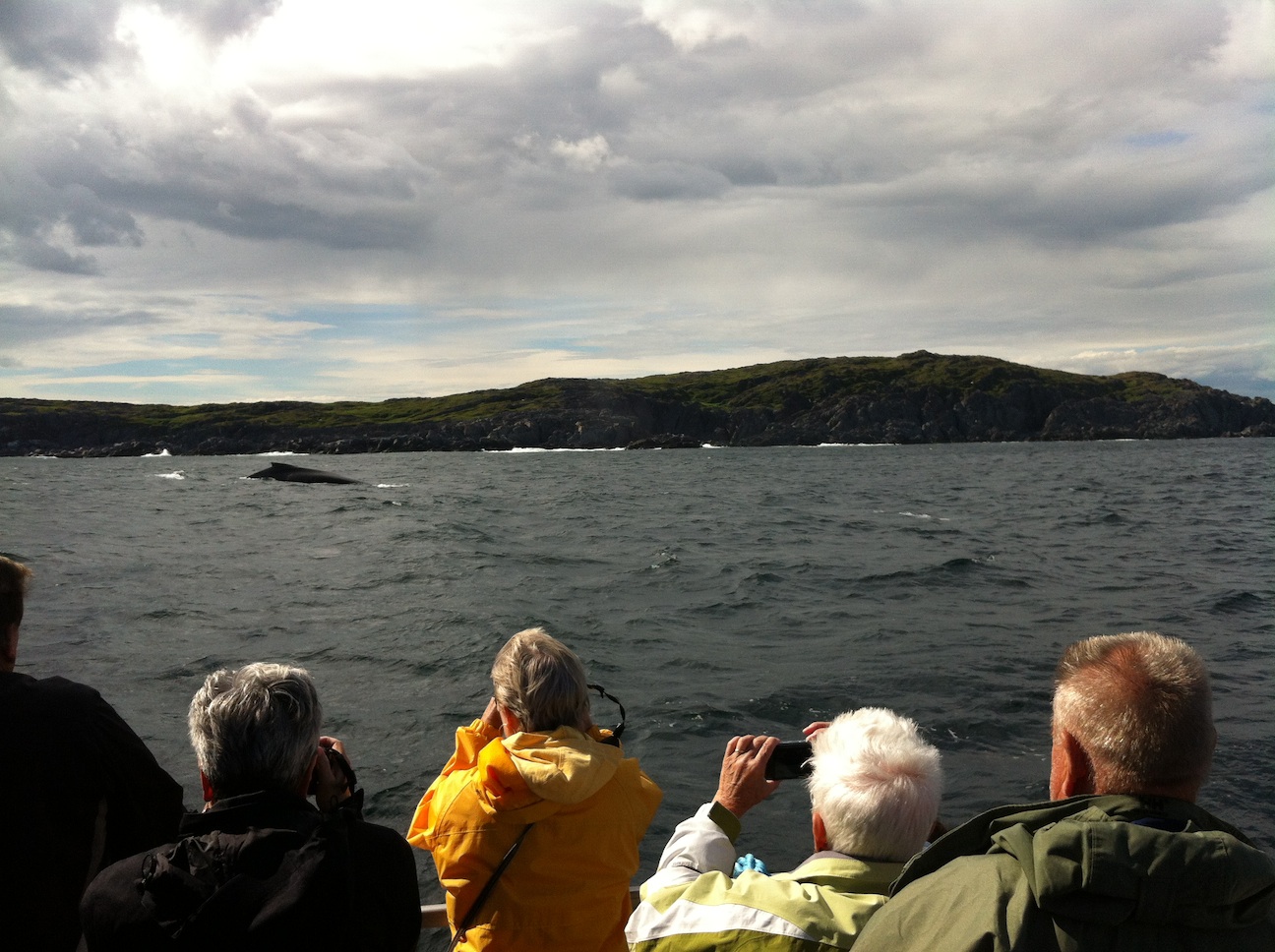 Usually they’re gone by July, except they’re bigger now and take longer to melt. Thus the behemoth I’d seen from shore. We headed straight for it, well, not completely straight for it. The currents dictated a little bobbing and weaving. Also some vomiting passengers. Turns out they were from Ontario. Fucking Canadians.

The closer we got to the iceberg, the more you could appreciate how much of it there was, the blue outlines of its underwater base made an appearance. Then there was the sound, the creaking of the ice melting, the growing lines, the occasional thunder of chunks breaking free and crashing into the North Atlantic. It was great. We got close enough to scoop up some bits and put them into our mouths. And, no, I was not drunk. That came later.

There were humpback whales and dolphins visible pretty much the whole time, sometimes breaching within 50 feet of the boat. Other than that, I was bored as shit. A few weeks earlier, tourists on the same boat got to see the whales and the icebergs all together. Here’s a video. 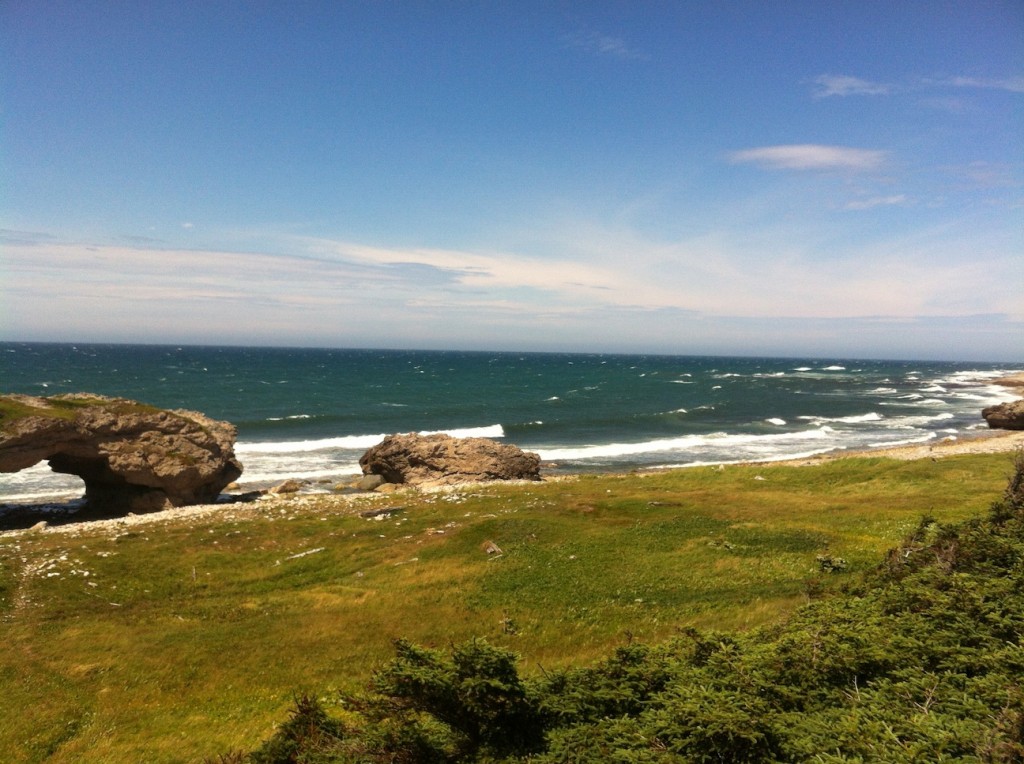 The west coast highway, looking towards the Gulf of St. Lawrence

I spent the next three weeks wandering around Newfoundland, reversing the normal tourist route and gradually making my way into the less wild (relatively speaking) southern end of “The Rock.” There were stunning cliffside drives along the way, twisting mountainside/ocean views that put California’s Pacific Coast Highway to shame. There were dark spectacular forests. There were rivers, right off the highway, full of fishermen taking advantage of the salmon run. There were places like Hawke’s Bay and Torrent River and, in every one of them, a small pub full of pathologically friendly locals. At one point, I swear, I had to sneak out of a bar because so many people were buying me drinks that I couldn’t possibly finish them all. I didn’t dare turn them down. So I slipped out a back entrance and into the Traipsemobile, where I laughed myself to sleep. 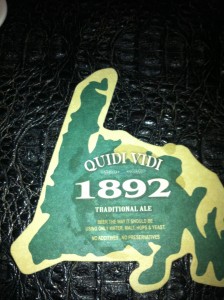 My favorite coaster. At the Magnum & Stein.

Eventually, I made it to St. John’s which, seriously, has the most densely-packed bar scene I’ve ever seen. George Street isn’t as long as Bourbon Street, but it’s even more jammed with drinkeries. And I had some pan-fried cod at Magnum & Stein’s that may be the best thing I’ve eaten since this road trip began.

There were other adventures, including an encounter with Rick Nielsen of Cheap Trick (who were opening for Aerosmith at a nearby festival) , in which he possibly mistook me for the most dedicated stalker he’s ever seen. Actually, I was just in the hotel lobby stealing Wi-Fi. “What the hell are you doing way up here?,” he asked when I told him I’d seen his son, Miles, playing at a bar in Rockford, Illinois just a few weeks before.

“Just passing through, “ I told him. Which was, of course, completely true. 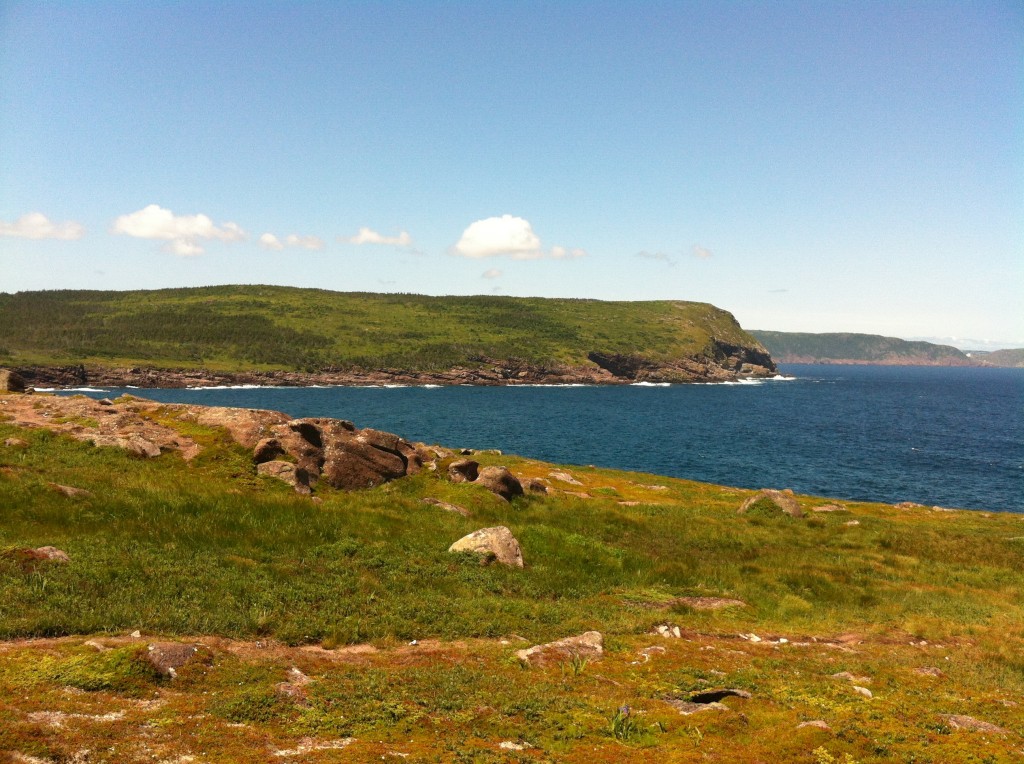 The easternmost point in North America

Herschel Walker and I are both legal Texas residents who will be in Georgia for the December 6 runoff that he will… https://t.co/OIv6eoEEz3
- Sunday Nov 27 - 1:23am