So, where were we? Oh yeah, Peoria. 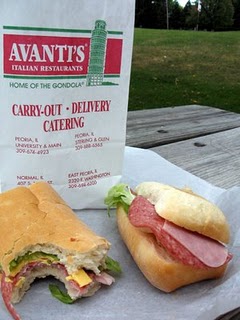 Did I mention that I made a point of going to Avanti’s while  I was there? It was a small campus-adjacent pizza joint 35 years ago, when I was attending Bradley, but has since grown into a Central Illinois mini-empire, with big restaurants scattered in various neighborhoods and, alas, the run-down, cramped and stinking-of-yeast original location has long since been bulldozed. There’s a fancier new version across the street now, spacious and well-lit with laminated menus and big comfortable booths. In other words, they ruined it.

But not the signature sandwich, the gondola, which is exactly as I remember it. A deceptively simple combination  of salami and ham, with lettuce, tomato, cheese, mayonnaise on –and this is the key —  fresh-baked Avanti’s bread, which I thought at the time was the best bread I’d ever tasted and I wasn’t even a pothead. It’s still pretty good. The secret, I think, is that it’s like a sweet sourdough, if that makes any sense. But they definitely put something in it. Sugar, maybe. Or crack. Which is fine with me, because it’s delicious and is the miracle substance that has gotten hundreds of thousands of college students through many a hangover and/or “Oh, shit the cafeteria’s closed!” moment.

The original Avanti’s is also the place where, for the only time in my adult life, I was punched in the face. And I didn’t even deserve it, which makes it shocking on two counts. My idiot friend, Tom Nicholson – now a hotshot public relations executive – decided to taunt a townie who was revving his hot rod at the stoplight on the corner of Main & University,  just outside Avanti’s, hunching down in a sprinter’s start and yelling, “Vroom, Vroom.” Tom Nicholson actually used those words. 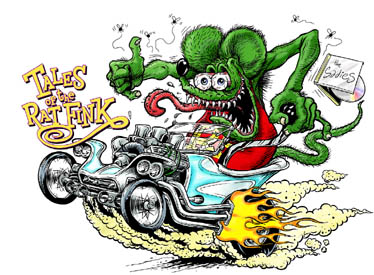 The townie apparently took exception because, unbeknownst to us, he drove around the block, came back around from behind, got out of his souped-up car and after growling out, “Hey, vroom, vroom, motherfucker!” punched me in the eyeglasses. Then the whimpering began.

Backpedaling and blinded, I somehow got away from him, screaming at the top of my lungs something along the lines of “Don’t hurt me. I’m the last of my kind.” Nick, meanwhile, had vanished. I made it a half-block back to my dorm, where assorted classmates, alarmed by what sounded like a wounded puppy, came to my aid. The townie took off.

We went back to Avanti’s, to look for my glasses and THEN Nick showed up. As did the cops, who someone in Avanti’s had called. We were giving a description of the incident, skipping over Nick’s escape and my overt cowardice, when we looked over at the stoplight and said, “And, oh yeah, that’s the guy right there.” The townie, even more of an idiot than Nick, had come BACK around the block to the scene of the crime. They pulled him over. We testified against him. Justice was done, except for the fact that Tom Nicholson did not get punched in the face and I did. He has pointed out, correctly, that there were plenty of other times when I didn’t get punched in the face despite clearly deserving it and, all things considered, things had worked out just about right. And this, ladies and gentlemen, is why I don’t believe in God.

I bring this up because food that can get you killed was also a feature of the Traipsathon’s next stop, Springfield, Illinois, the state capitol, center of Lincolnland and home of , hands-down, the gloppiest, heaviest and deadliest trademark cuisine of any English-speaking city in North America (This, you will note, cleverly excludes those poutine-eating bastards in Montreal.) 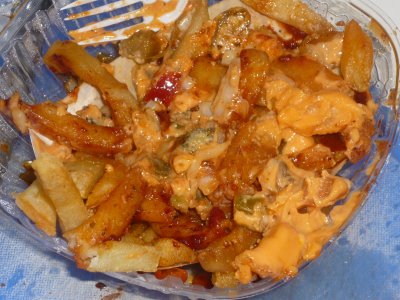 I am speaking of The Horseshoe, which I’d never heard of before this trip, remnants of which will surely be residing in my colon for the rest of my much-shortened life. If you want it’s actual history, you can check Wikipedia. Here’s what I know without looking: this dish was not created by a woman. It was a guy. Probably a drunk guy.

What they do – and God bless ‘em for being proud of this – is take some Texas toast, big honking pieces of white bread, upon which they pile some meat product, hamburger in the original incarnation, but now it can be buffalo-spice chicken or, really, whatever you want. On top of that is a mound of french fries. And then this big goopy cheese sauce, queso more or less. If you order a small one, which I did at a place called D’Arcy’s Pint, it’s called a Pony. This, I believe, is because even the small one contains as many calories as an actual pony.

They have breakfast horseshoes, catfish horseshoes and, for all I know, Corny dog Horseshoes. The cheese sauce recipes from place to place and are closely=guarded secrets because, hey, it’s Springfield and it’s not like they have anything else to do. The friend who took me to D’Arcy’s pint, says he can only eat maybe 2 Horseshoes a year. Which is why the next night, we went out for pizza.

The waitress, who I’d charmed by pretending to hear voices coming from the cash register hard candy (women always fall for signs of mental illness), decided a little customer hazing was called for. “Are you guys together,” she asked, an intimation that horrified my friend, who is a sportswriter and should be used to this since he has a job that frequently involves the interviewing of naked men.  I noticed his discomfort and helped the only way I knew how.

“There’s nothing romantic going on, if that’s what you mean,” I said. “It’s a purely sexual relationship.”

And, although my friend turned spectacular shades of red and sunk down a little lower in the booth, I once again didn’t get punched. Which, if you think about it, is why you shouldn’t believe in God, either. Would an all-knowing God let me get away with shit like that?  On a regular basis.

If you want further proof of the random injustice of the universe, I highly recommend a visit to the Abraham Lincoln Presidential Library and Museum in Springfield, which is chock full of inspiring exhibits and important documents and local actors pretending to be ghosts and soldiers and stuff.  Also there are Lincoln death masks, locks of his hair, and the bloody gloves he wore the night of the assassination. (Make your own O.J. Simpson joke here.) It really is impressive. Lots of cool films and inter-active displays, assorted mannequins and costumes and special effects designed to make you feel like you’re actually in the middle of the Civil War. It was very loud. 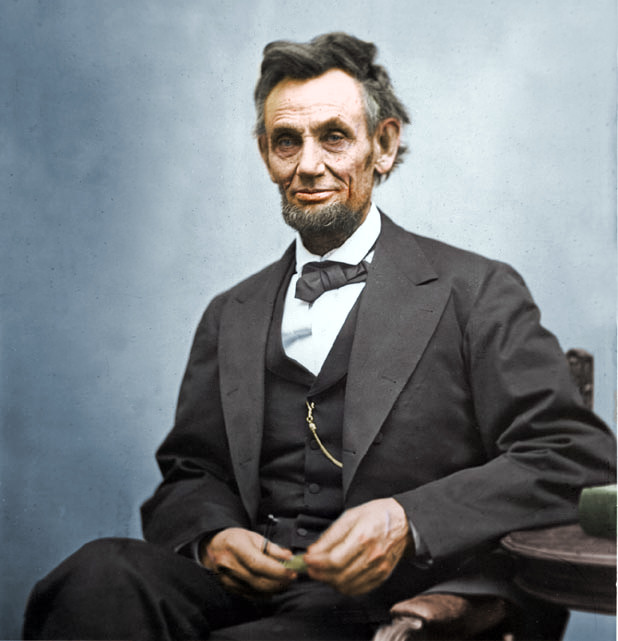 There are also lots of editorial cartoons from the time, virulent, nasty things portraying Lincoln as, among other things, a monkey. One editorial railed against him as “African King” because of his Emancipation Proclamation. Sound familiar? Glenn Beck and Sean Hannity had nothing on these guys.

I find this encouraging, a reminder that we’ve always had people who attacked leaders for trying to change society, even in – maybe especially – in the midst of a Civil War. The Tea Party types, screaming about how they “want their country back” are the same people who considered Lincoln un-American because he challenged their right to own slaves. Even if  Michelle Bachman plans to attack Fort Sumter, or South Minneapolis, we’ll be all right. We got past the people standing in the school house door. We’ll make it past these idiots, too. I am sure of it.

And as they shout and scream, feel free to both pity and mock them, because they deserve both. They are scared, because they understand on a gut level that things really are changing, that every day, they are a little bit less in charge. I understand their pain and their panic. But, in the end, they will have to step aside. They can’t stop progress, no matter how hard they try. 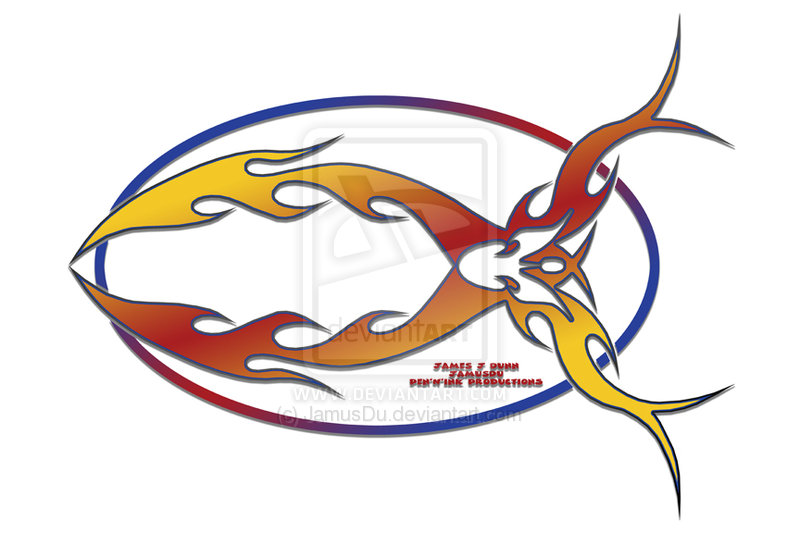