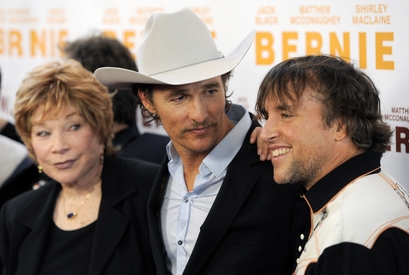 We are disrupting the usual “So where were we?” dispatch format to bring you breaking news.

Last night was the world premiere of “Bernie,” Richard Linklater’s film about the mortician who murdered my aunt in 1996. It was the first time anyone outside of Linklater and his editors had seen the final cut, the first time Shirley MacLaine, Jack Black or Matthew McConaughey would see it. 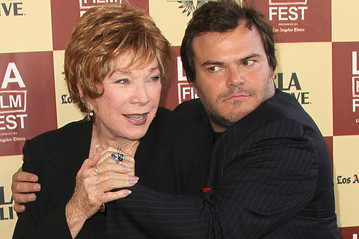 I was surprisingly nervous, not because I had any qualms about seeing a fictionalized version of my aunt being shot in the back and stuffed into a freezer. But because I want the film to be good. I’m writing about it, and the weirdness of having a family tragedy turned into a Hollywood comedy, for the New York Times Sunday Magazine. The better the film, the more people will be inclined to read my article. So I have a stake in this.

The occasion was the opening night of the Los Angeles Film Festival, at the Regal Stadium Theater in downtown L.A.,  and it came with all the trappings: the red carpet, the herds of photographers, the armies of assistants with headsets and self-important glares. And that was the part that seemed weird, the L.A. la-dee-dahness of it all. It’s all about pecking order out here, your worth defined by which table you get at restaurants, which seat you get at premieres. The start of the film was delayed by a full half-hour because there were squabbles about whether Matthew McConaughey’s guests and family should be in the same row as Jack Black’s. Watching the scurrying producers and the grave consternation on their faces, you’d have thought they were deciding whether to authorize an assassination. Which I’m sure some of them have done.

The best seats were reserved for the stars and their families, the second-best seats for Festival sponsors and potential distributors and the worst seats, the ones off to the far sides of the theater, for the press. It was hell getting a press credential, because the publicists had a hard time understanding exactly what my role is. Is he a reviewer? Is he in the film? Is he being invited as a guest because his aunt got murdered? Finally, it was decided that I should get a press ticket and access to the non-VIP part of the after-party (there would be red velvet ropes  – of course – that required a red wristband to cross. My wristband was blue. Drinks were still free, but hanging out in the Very Special Astroturf-and-Sofa section with the cast and assorted “guest celebrities” was not allowed. There were guards to enforce this rule.)

Finally, the lights went down and, as is customary at these sort of things, the director and cast came on stage to give a little introduction. Linklater, looking even more out of place than I felt, was wearing a glorious black-and-white cowboy shirt and the hangdog face of a man about to be executed. He really is uncomfortable out here, standing in front of Hollywood crowds, some of whom have the power to finance distribution of his film, doing the song-and-dance. But he does it because he has to. 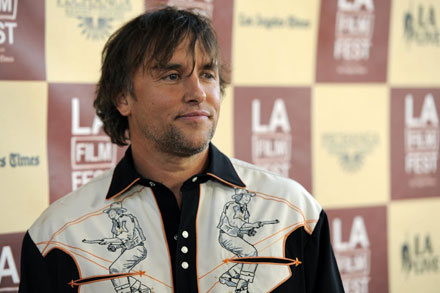 Black, McConaughey and, most of all, Shirley, have no such problems with the spotlight. Jack Black, who is also a producer, gave a heartfelt speech about how much he loved Linklater and the movie. McConaughey, all duded up with a white Stetson and pointy boots, drawled out praises and then Shirley, oh Shirley, proceeds to tell a version of the story she always tells about Linklater, the gist of which is that his answer to everything is , “I don’t know.” She tells the story this time – cause he’s standing right there – as if she thinks it’s an adorable idiosyncrasy meant to let creative people find answers on their own. But sometimes she tells with more of a barb, as if she really truly believes that he doesn’t know what the hell he’s doing. He’s heard both versions and you can see him squirming and turning red as she launches into. All red-in-the-face in his cowboy shirt, he looks even more like a little kid than usual. I felt like someone should give him a hug.

The movie starts with a dark screen, a lonely violin and then a card that says “What you’re fixin’ to see is a true story.” I’m not sure if the Hollywood audience believes it or not. But I’m here to tell you that what’s in the movie is – even more than I anticipated – pretty much true.

They’ve changed a few names. (My mom for instance – Merrell in real life – is referred to as Lisa Beth.) They’ve taken a few liberties with set decoration – putting a wall full of gigantic stuffed hunting trophies – like something out of “Evil Dead” in Aunt Marge’s house. And the guy who plays Uncle Nugent doesn’t look or sound anything like him. But, beyond that, it’s all pretty much as it was. 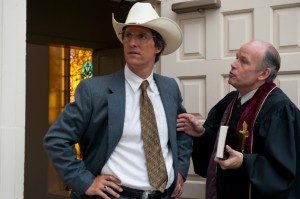 There’s Daddy Sam’s – “Barbecue and Bail Bonds” and The Jalapeno Tree and the Texas Country Music Hall of Fame. There are eventual shots of the Boot Scootin Western Wear, which Bernie bought for a friend with Aunt Marge’s money, after she was stuffed in the freezer. There’s the Esquire Theater and the downtown square. And, sitting there in Los Angeles, surrounded by all those glittery dresses and carefully-tousled hair, it felt weird to be seeing the place where I was born being projected as this backwoods-quirky, almost mythical place. Not inaccurate, mind you. Just weird.

You know the story. (If you don’t, you can look it up here or read the Texas Monthly article on which the movie is based. ). And the movie tells it pretty much the way it happened. It introduces you first to Jack Black as Bernie, the gregarious, lovable mortician and church soloist and then to Shirley as Aunt Marge, with a mean pinched-up face and not much use for anybody she couldn’t control. Eventually, Matthew McConaughey shows up at Danny Buck Davidson, the local prosecutor, which is hilarious because the real Danny Buck is short, doughy and distinctly double-chinned. Everybody else, though, kind of looks like who they’re supposed to be. 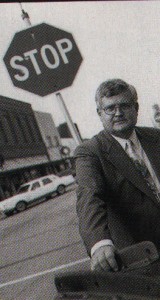 Including Margaret Bowman, the actress playing my mother. And those were the weirdest scenes to watch. I met Margaret on the set. She’s heavier and older than my mother was at the time, but her hair and her clothes are pretty much dead-on. There’s a scene in the movie when she’s talking to Bernie about how mean Marge had been to her when she was a little girl. My mom has had almost that exact same conversation with me. Spooky.

The biggest risk Linklater has taken – and this will be prominently mentioned in all the reviews – is that interspersed with the main narrative are interviews with local townspeople giving their opinion about Marge and Bernie, some of it informed, some of it not. It’s small town gossips letting loose and some of it is tremendously funny. The Hollywood crowd ate it up, cause a lot of it feeds into their notions of what East Texans must be like, people with big bellies and big hats, inclined to say things like, “over there, they’ve got more tattoos than teeth.”

Some of the people in those interviews really are from Carthage, and a few of them are playing themselves (like Billy Vaticalos, Aunt Marge’s old hairdresser). But some of them are actors (including Matthew McConaughey’s mom) and all of them are working off scripted lines. The lines are straight from Skip Hollandsworth’s original Texas Monthly interviews and court transcripts, but almost none of them are said by people who said them in real life. It’s a weird swirl of pseudo-reality.

So here’s the deal: I liked it. A lot.  But I’m not sure if I liked it because it was good, or because I was already so wrapped up in the story. I think Jack Black really nailed the Bernie portrayal, although I’m not sure his usual fans will like it. He hams it up a few places – because Bernie hammed it up in real life – but not many. That may disappoint some people.

McConaughey gets some of the best lines and, I expect, will get some of the best reviews. I’m not sure what people will think about Shirley. In the course of the film, Aunt Marge has to go from being mean to likable to mean again, and it happens pretty abruptly. The festival audience, just pleased to see Shirley MacLaine tearing into a juicy part, seemed to go with it. I don’t know if a general audience will. I really don’t know.

I want the movie to be good. And I think it is. The reviews have been generally positive. But I have no objectivity. There was an actress playing MY MOM! Just thinking about it, made me dizzy.

Linklater at the after-party

Which is the state I was in when I wandered into the after-party, set up on the roof of a parking garage next to the theater. There was free beer and whiskey (I ended up drinking Jameson’s with ginger ale) and food that I guess was meant to reflect the film. Fried chicken, mashed potatoes, bbq salmon. Although it was “honey-stung” fried chicken. Whatever the hell that means.

I bounced around on the rooftop for a while, chatted with the producers and with Skip Hollandsworth, who’d flown in with his wife and agent. He asked where I was staying, just cause he enjoyed hearing the answer.

“In The Traipsemobile,” I told him. “It’s a couple of blocks away.”

And so eventually I wandered back home,  which for the night  was a parking lot on Olympic Boulevard, the skylights from the premiere still bouncing off the clouds, the fancy people walking by in their fancy clothes, not knowing there was a guy from Carthage, in his bedroom, just a few feet away. 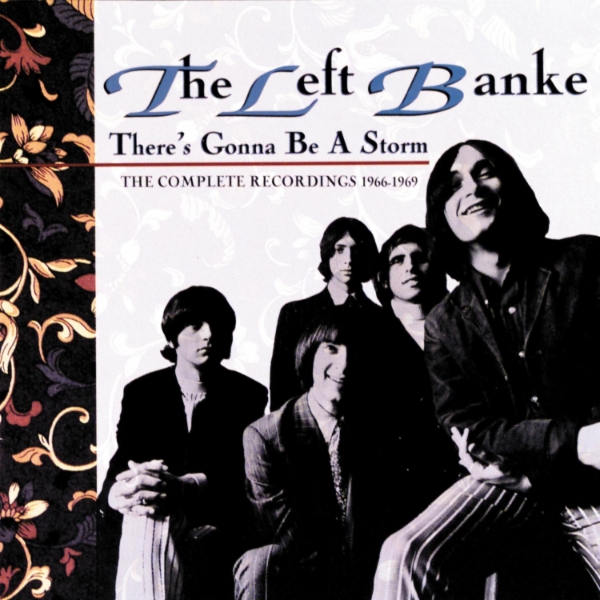 Walk Away Reneeby The Left Banke