So where were we? Oh yeah, St. Louis, in an alley behind a Greek restaurant.

My plan was to slowly drift west and south, trying to get ahead of the increasingly-cold midwestern nights, which seemed to be gaining on me. The temperatures were routinely dropping into the high 30’s at night. And the house heater wasn’t working. Heading for Texas seemed like the right thing to do. Not that I was in a particular hurry. I’d get there when I got there. 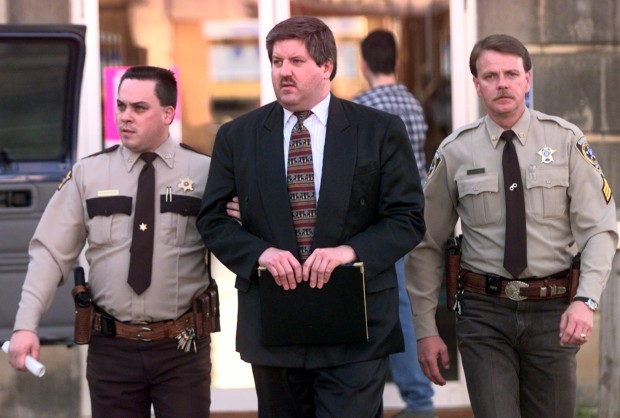 Bernie Tiede, the guy who froze my aunt, on his way to court,

I was planning to stop off at a few places in between – to see friends in Kansas City and Oklahoma and cross the Red River some time before the middle of the month. But that was before I got a call in St. Louis, telling me that the filming of “Bernie,” the Richard Linklater movie starring Shirley MacLaine as my murdered aunt and Jack Black as the guy who killed her, had barely a week to go. If I wanted to get on the set, I’d have to get my ass to Austin as soon as possible. Beelining was required.

I left St. Louis on Saturday morning, still slightly hung over from the 3 a.m. tequila drinking, and drove until I couldn’t drive any more. I spent the night at a Wal-Mart in Anoka, Oklahoma and by Sunday night I was in Austin. 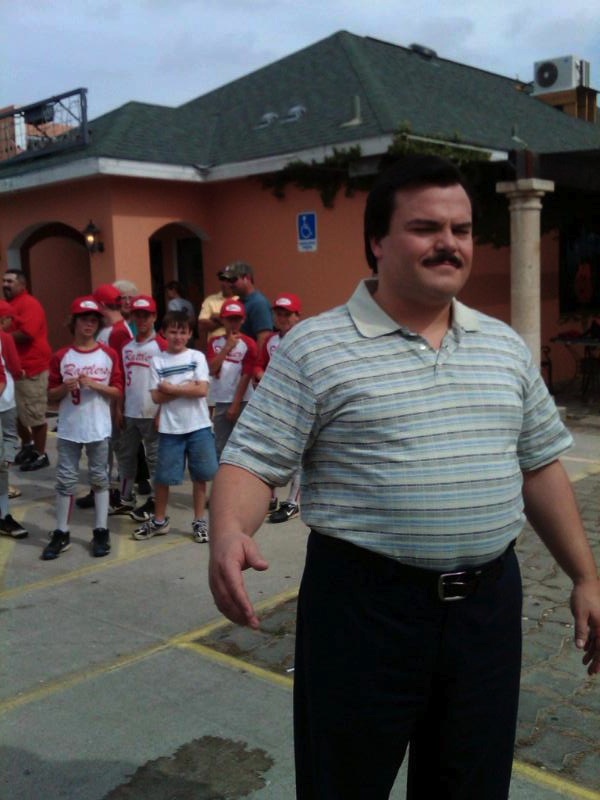 Jack Black, in costume as Bernie

The movie, it turns out, had been shooting at a breakneck pace, only 22 days of filming, insanely short by feature film standards. They had big stars – MacLaine,  Black, Matthew McConnaughey, but only a $6 million budget. There was no fat in the budget or the schedule. Linklater, was paying everyone, himself included, minimum up-front fees, in hopes of selling the movie to a big distributor next spring. So they raced through the script. And I almost missed my chance to watch actors pretending to be members of my family, not just Aunt Marge, the victim, but my mother, who had a peripheral but important role in the real-life drama. I had to see this. It was just too weird to miss.

And I didn’t. The producers – clearly moved by my flurry of desperate, pleading e-mails – gave me permission to visit the set on the day they were filming my uncle’s 1990 funeral, the place where – legend has it – Aunt Marge first became enamored of the mortician who ended up killing her.

Most of you already know this story, because it’s really the only thing that’s made me interesting at parties for the last decade or so. Here’s the short version, sort of: 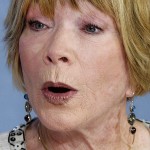 My Aunt Marge was the meanest old lady in Carthage, Texas, the town where I was born. She was also one of the richest, because her husband had some luck as a independent oil man and had some pretty good investment advice. He was probably something of a scoundrel as well, a “drink your milkshake” kind of guy. I never liked him. In fact, when I was a kid, I used to put corn-cob holders in his chair at the dinner table, hoping to puncture his ass. 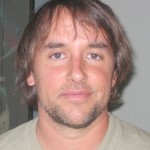 Anyway, he and Marge, who lived in Longview for most of my life, moved back to Carthage in the late 1980’s, bought one of the local banks and more or less saw themselves as the Lord and Lady of Panola County. They liked being – at least in their own minds – the most important people in town. And that’s how they expected to be treated. Aunt Marge had always liked ordering people around and now she had the means to get away with it.

The thing is, Uncle Nugent up and died in 1990, which served him right for being a such a dick. Because she was feuding with everyone in the family – her son and my mother included – Aunt Marge pretty much sat by herself at the funeral. The person who noticed, held her hand, offered her his coat, seemed to care about her when no one else did was Bernie.

That’s the scene they were filming on the day I watched, at a cemetery in Bastrop, Texas. Margaret Bowman, a Houston actress, was playing my mom and she looked amazingly like her. We chatted. We took pictures together. It was freaky. 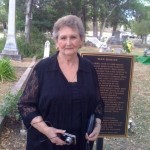 And then there was Shirley, the last one to arrive on the set, and – hoo, boy – she looked EXACTLY like Aunt Marge, same hair color, same pinched-up, pursed-lip look on her face. And she was walking her dog, Terry, who looked exactly like Aunt Marge’s old dog, Shadow. I kept my distance, mostly because I wasn’t sure if it would throw her off to meet the nephew of the woman she was portraying, especially on the day of an emotionally-complex scene. I shouldn’t have worried.

Skip Hollandsworth, who wrote the Texas Monthly story that Linklater optioned for the film (and ended up with a co-screenwriting credit on the script) introduced me to Shirley, because he wanted to see how she’d react. We hit it off immediately. She had a million questions about my family, about what Aunt Marge had been like when she was younger (a complete bitch for as long as I knew her, was my answer).  She’s fascinated by the story. 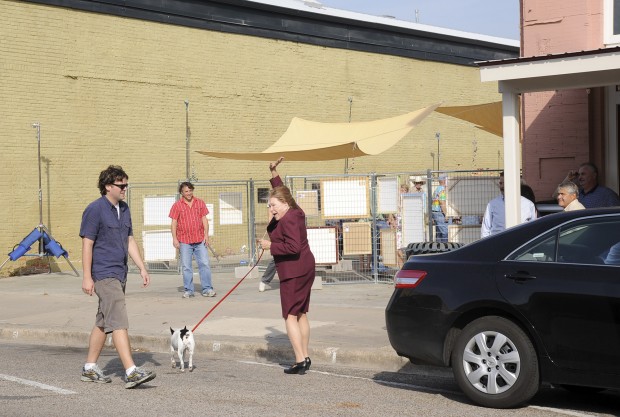 Shirley MacLaine, with Terry, in costume as Aunt Marge

Which, if you don’t already know, is this: Bernie took up with Aunt Marge after Uncle Nugent’s funeral, accompanying her to all sorts of social events, traveling all over the world with her – cruises down the Nile, Broadway tours of New York, weekends in Las Vegas. They became the talk of the town, the mortician and the rich widow lady. There was much speculation about the nature of the relationship. It was small-town gossip on steroids.

What made it even weirder was that Bernie was as beloved as Marge was disliked. He was everybody’s best friend, a soloist in the choir, patron of the local community college theater group, sponsor of Little League teams, sociable to a fault, the guy in town who’d take soup to shut-ins and then spend the afternoon. And also pretty obviously gay. “Light in the loafers,” according to the local funeral director. Everybody loved Bernie. Nobody loved Marge. And yet there they were, together.

She eventually convinced him to quit his mortician job and take care of/work for her full-time. She paid him a shitload and also gave him access to her checking account, so he could pay her bills. He bought a lot of thing with Aunt Marge’s money, some of it with her knowledge, some of it surely without. Maybe she found out he was spending her money without permission and confronted him about it. Maybe he just got sick of her hectoring. Hard to know. But he ended up shooting her three times in the back with her own rifle and stuffing her into the deep freeze, where she stayed for 9 months before anyone bothered to notice that she wasn’t around. Most people in town, were just happy not to encounter her. Why ask questions?

They also didn’t ask – although it must have occurred to them – why Bernie suddenly had so much money to throw around town, buying people cars and houses and the Boot Scootin’ Western Wear Store. They had to suspect something wasn’t right. Marge would never have been that generous.

Bernie was pretty good at pretending everything was fine, even though he knew there was a corpse in the kitchen deep freeze. On the rare occasion when someone, usually a financial associate requiring a signature, came around asking for Marge, he’d say, “Oh, you just missed her.” Or “She’s taking a nap.” And eventually, “She’s in the hospital in Temple, but doesn’t want anyone to know.”

Finally, after 9 months, her son and granddaughter came looking for her, noticed the duct tape around the freezer and the granddaughter peeked inside,. She saw that dyed red hair and realized that her grandmother was under the flounder and the Marie Callender waffles. They arrested Bernie at a Little League awards dinner. They ended up having to move the trial to St. Augustine, because no jury in Carthage would have convicted him. 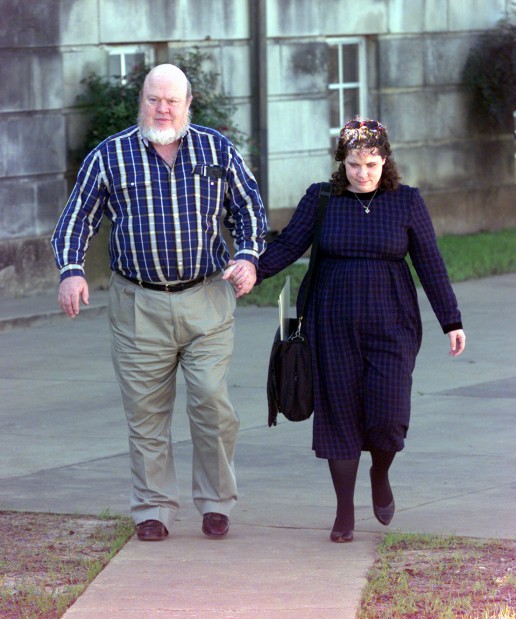 My cousin Rod and his daughter, Jennifer, who found the body.

Now Bernie’s in prison, Aunt Marge is dead and they’re making this movie about it. And here we are in Bastrop, TX re-creating the whole sordid – and quite hilarious – tale. Linklater calls it his “east Texas Fargo.” The movie is held together by observations from town gossips. In real life, the gossips were a pain in the ass, which Linklater found out when  — somehow – rumors started flying that the movie was filled with “filthy language” (It’s not.) and that there were scenes involving “gay casket sex.” How does that rumor even get started? It got so bad that the funeral home where Linklater was originally going to film backed out because they “didn’t want to be associated with that sort of thing.” Seriously.

Skip and I ended up having lunch with Shirley in her trailer, nearly two hours worth of conversation and anecdotes, which I have on tape and will be unveiling in an actual magazine story down the road. It was great. And, when she’d order an assistant director around, I couldn’t help noticing that Shirley and Aunt Marge weren’t that different. Maybe she was just in character. But, probably not.

She invited me to her hotel that weekend and we sat around eating chips and guacamole, drinking Pinot Noir and getting mildly slurry. Andromedans were mentioned. Past directors were dissed. Promises of future encounters were made. We shall see.

Linklater, who was gracious enough to do a sit-down interview with me last week, will be editing the film for the next couple of months. Most likely, it will make its debut at the Cannes Film Festival next spring, possibly in competition. At that point, he hopes, a distributor will buy the film and make arrangements to release it next fall. By then, he’ll have moved on to something new. As will I.  Bernie, however, will still be in prison. And Aunt Marge will still be dead. 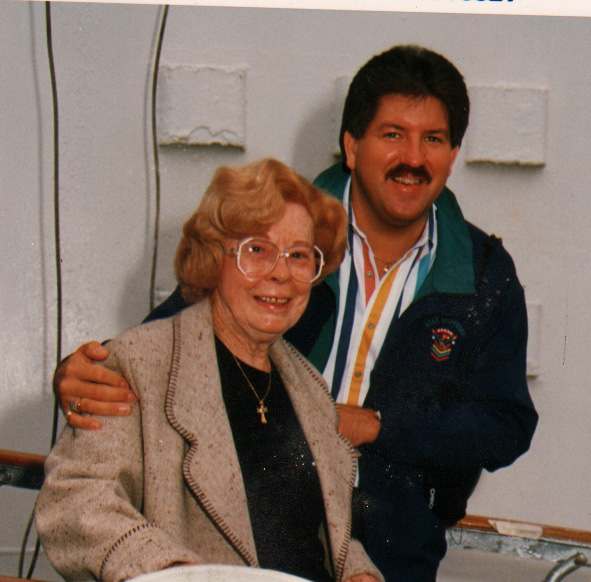 Bernie and Marge, in happier times 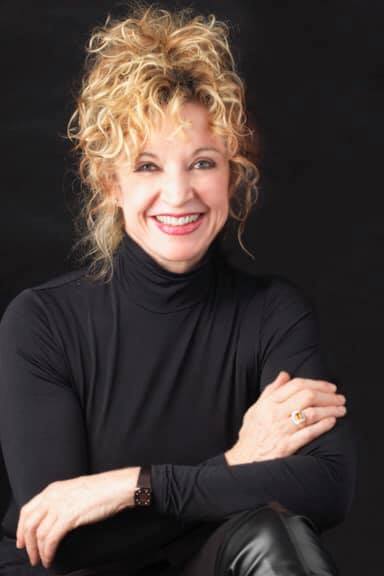 @JohnCornyn Excellent approach, Senator. Paint her as a radical and hope to God no one actually notices that she's not.
- Wednesday Aug 12 - 12:06am

@cmclymer How does Warren leap past Schumer, Durbin and Murray? What's the scenario?
- Tuesday Aug 11 - 10:00pm