So where were we? Oh yeah, Las Vegas.

I grew weary of the desperation, the phoniness, the brain-numbing assault of glitz and prevarication and people pretending to be something they are not. So I went back to Hollywood.

Because I’ve been out here so long – more than 20 years, off and on, more than 2 months this time around – I tend to take the place for granted. I forget how exciting it was to drive into Los Angeles for the first time 35 years ago, to actually see all those places from the movies and tv shows. The palm trees in Beverly Hills. The Santa Monica Pier. Sunset Boulevard. Hollywood Boulevard.. Wilshire Boulevard. (If I’d been Randy Newman, I’d have written a song about it.). The whole place felt like a theme park. 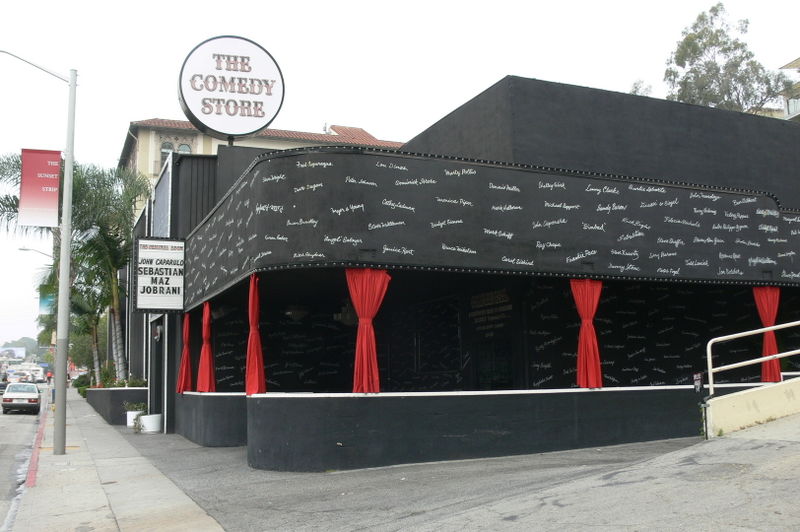 I couldn’t believe I was seeing UCLA play at Pauley Pavilion, which until then had been this exotic, far-away black-and-white basketball temple, a flickering late-night image on my cheap-ass bedroom tv. But the place I was most excited to see was The Comedy Store. I’d never seen live stand-up before. But I was addicted to the stuff. I’m not sure why. I’d watched The Tonight Show every night since I was 16 and I was always mesmerized by guys – they were all guys then, except for Joan Rivers – who could walk out there, alone, and make strangers laugh. There was a part of me that wanted to do it myself. And a much bigger part that was way too frightened to try.

I lived for those nights when Pryor or Rickles or Buddy Hackett would just tear up the place. Loved the old pros – George Gobel, Alan King, Newhart and Cosby, who was the best of them all. He really was. People forget that, cause he got all cuddly and old. But he was just devastatingly good. I’m pretty sure I remember the first time I saw Shandling, Seinfeld, Belzer. David Steinberg. I KNOW I saw Roseanne Barr’s first shot. Stand-up comedy spoke to me the way movies spoke to some guys and rock and roll spoke to others. It was smart guys making fun of stuff, the wise-ass from the back of the class going to the front of the room and saying things loud enough that the teacher could hear them. I got it. 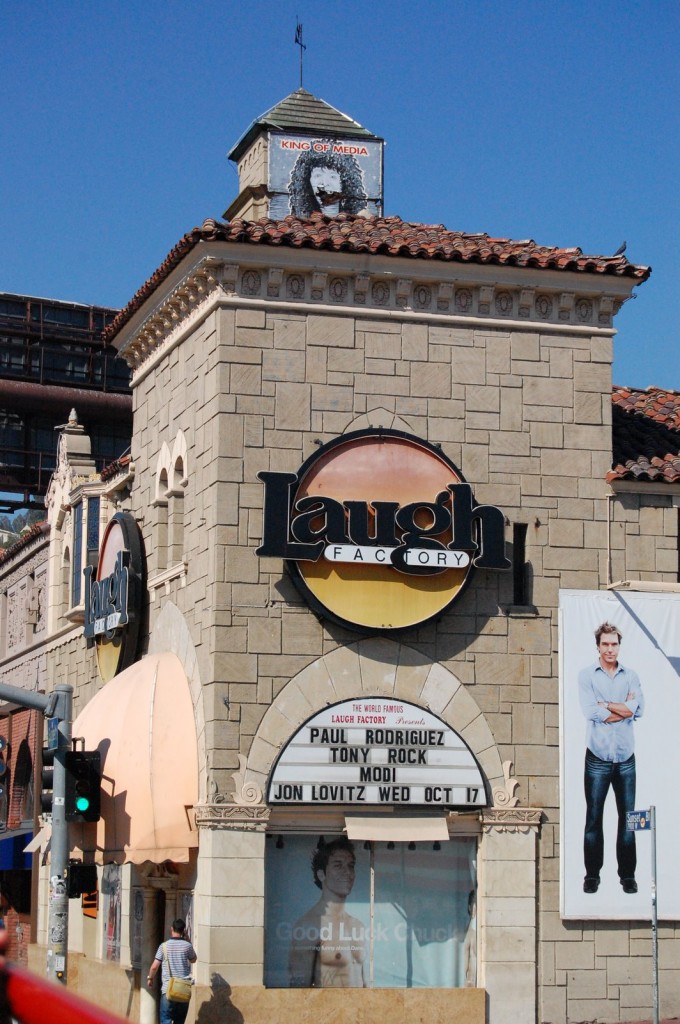 Sitting in the back of the Comedy Store and see Robin Williams or Richard Pryor show up unannounced, do 45 insanely funny (and let us not forget cocaine-fueled) minutes was the coolest thing I’d ever experienced. In later years, I’d go back with Louie Anderson or Jeff Cesario and sit out back listening to comics bitch about the world and be incredibly mean to each other (confirming my instinct that I could never have survived that world – not tough enough). I saw Letterman there, Daingerfield, Jim Carrey, Andrew Dice Clay, Howie Mandel (who used to run out of the club, jump on the passing tour buses and scare the shit out of people) Drew Carey, Sam Kinison, Rosie O’Donnell, pretty much everyone who ever got paid to be funny.

Which brings us to Dave Chappelle.

He flamed out like no comedian ever flamed out before. Not because of drugs or psychosis (I don’t think) but because he couldn’t handle the attention, the responsibility that comes with getting paid $50 million and being declared the comedy voice of your generation. It freaked him out. He also – so he said – felt like he was being put in a box, ripping off his own material, making jokes about Black People for the enjoyment of White People. He got himself a bad case of Imposter Syndrome, which hits everyone who ever does anything even remotely creative for a living. “How have I pulled this off? Don’t they realize I’m not really a genius? They’re going to figure it out any second now! Holy crap. I’m fucked. I’ve gotta get out of here.” 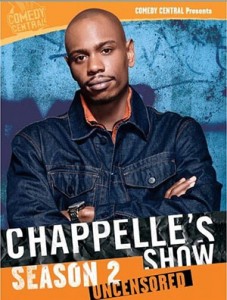 And he did, left his cast and crew (and Comedy Central) holding the bag while he hightailed it off to South Africa (because, he said, it was the farthest place he could think of) . He went into pseudo-hiding after that, although you could see him at the grocery store in Yellow Springs, Ohio, where he had a house and a family and, from all accounts, a pretty normal upper-middle-class existence.

People thought he was Howard Hughes, or that maybe he’d gone all Charlie Sheen, before we knew what going all Charlie Sheen actually meant. He showed up on Oprah, swore he wasn’t crazy. And then he went back to Ohio, leaving most everyone wondering, “What the fuck was that about?”

For the last couple of years, he’s been popping up at The Laugh Factory in Hollywood, almost always unannounced. He did it again last weekend. The club owner, Jamie Masada, is a friend of mine who suggested I come see what was going on. “He stays up there for 5, 6 hours sometimes,” Jamie said. “It’s fascinating. You can see how the mind of a comedy genius works.”

On Saturday, apparently, he’d done a four-hour shift, showing up around 11 p.m., staying on stage until 3 a.m. At 2, Jamie had his waitresses pick up all the drinks and, after that, they just stayed until Chappelle was done. There have been nights when that was 5 a.m.

Sunday night, after watching the Oscars, my friend Kathleen and I went to the Laugh Factory. It was already 11 p.m. No Chappelle. There were a couple of other stand-ups, good but not great. I should also mention that Sundays at The Laugh Factory are “Chocolate Sundaes”, mostly African-American comics and a mostly African-American crowd. Because I was an old white guy with a reserved seat, people assumed I was a manager or a talent scout, or some other important person. Most of the comics stopped to shake my hand before they went on stage, even though they had no idea who I was. This may have been the funniest thing that happened all night.

And then, at 11:42 p.m., the emcee abruptly announces “Ladies and Gentlemen, Dave Chappelle.” The place went nuts. Beatlemania kind of nuts. Oprah’s-Giving-Us-Cars kind of nuts. I don’t know how many people knew he was coming. Most, clearly, did not. It took a good 10 minutes for the place to settle down. Although, to be honest, it never really did. 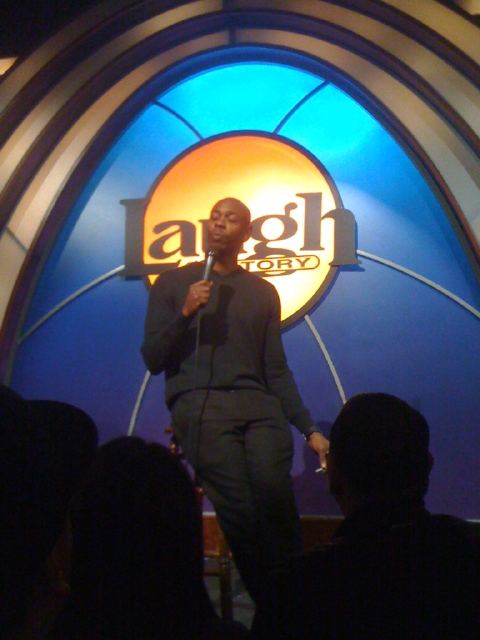 People kept screaming his name, taking his picture, squealing and then screaming his name again. I don’t know if this happens every time he shows up, but there wasn’t anything he could do except let the mayhem play itself out. He finally got sick of the camera phones and the screaming and told the crowd to put their phones away. “I didn’t walk away from $50 million to make my big comeback on YouTube,” he said. “That was not my plan.”

He’s only 37, but he looks noticeably older than when we last saw him on tv in 2006 (Good God, really? Five years ago?) . He looks tired, puffy, softer around the middle. Not bad, really. Just older. He walked onto stage with a knapsack on his back. He started smoking as soon as he got on stage, parked himself on a stool and then . . . just kind of said whatever popped into his head.

He was on his way to an Oscar party, he explained, so he couldn’t stay long. He had an elaborate plan to get his picture taken with Halle Berry, who he’d never met in person. His man, Pookie, who was sitting next to me in the VIP section, had apparently gotten them the invitation. Or at least the location,

“We really gonna crash this party, Pookie?,” he said from the stage. Pookie, busy texting, said, yeah, if that’s what he wanted to do. Later, it turned out, Pookie had been texting Matthew McConaughey and Tyrese Gibson. Cause that’s how Pookie rolls.

The whole time he was up there, Chappelle acted like he was just about to leave. But then he’d light another cigarette, put down the knapsack and keep talking. He stayed up there until 1:47 a.m. I don’t know whether the party was still crashable at that point. I’m not sure they really tried. 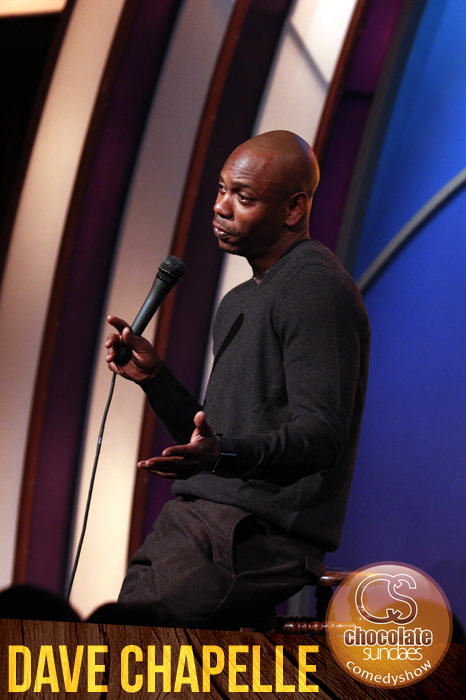 A man in a cashmere sweater

So he rambled, sometimes hilariously, sometimes not. He went off on a riff about how he’s so rich that he rides hot air balloons everywhere he goes and his biggest problem is where to find saddles for his giraffes. He made fun of the way he was dressed – slacks and a cashmere sweater (for the party) and ended up doing a long tangent about how he was going to form a gang of sweater-wearing African Americans who would know each other by their “soft fabrics.”

You really could see the process. How his brain works. He’d be answering a question and, without even trying, he’d created a bit about how frustrating it must have been for Albert Einsteain to make small talk in a bar before getting fed up with the inanity of it all and blurting out, “I’m inventing a doomsday machine, bitch.”

I don’t think any of it was written material. Some of it wasn’t meant to be funny. He’d occasionally make a reference to his show and his leaving. “I did it wrong,” he said. “My show business advice to young people is if you’ve got a $50 million television show, don’t leave it. It’s cold out there.”

At one point, he began singing Mister Mister and Bryan Adams songs, in their entirety, to the crowd. “I got my first real six string, bought it at the five and dime.” He did it, just because he could. “I like singing 80’s white music to mostly black audiences,” he said. “It amuses me.”

I don’t know what he’s doing up there, for five, six hours at a time. I don’t think he does, either. He clearly needs a place to say things out loud, the feel of an audience responding to his ideas. “Why am I here?,” he shouted at one point. “Why have you summoned me?”

Someone did ask him, “Why are you here?” to which he answered, “Clearly, I crave attention.” But I don’t think that’s it. If he wanted attention, he could sell out a national theater tour tomorrow. He could probably find a way to go back on tv. No, he’s wrestling with something else up there and this is a safe place for him to do it. But I don’t know what that is.

I’d like to see him again on one of those five-hour nights, just to see how weird it gets. As it was, he was antsy, signalling to Pookie that it was time to go. “You are a terrible audience,” he said before leaving. And he wasn’t wrong.

But he stuck around for at least a half-hour after he left the stage, posing for pictures with every drunk 21-year-old who wanted a souvenir. Then he and Pookie went out the back door. I hope he got to meet Halle Berry. My guess is that he just went home.