Wordfight at the O.K. Corral

Wordfight at the O.K. Corral

So where we? Oh yeah, the Laugh Factory in Hollywood.

Having pissed away most of the winter in southern California – exactly as I planned – I’m ready to get back on the road. I’ve got to go to Texas for an assortment of reasons, some of them dull and clerical (license plate renewals, assorted Traipsemobile repairs), some of them exciting and important (a prison interview with the guy who killed my aunt). But, mostly, I just need to get back on the road. I’ve been in one place too long. Also people in Los Angeles are tired of me. It’s time to move on. 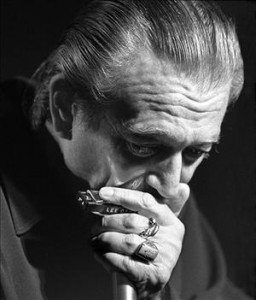 I looped down through San Juan Capistrano – stopping long enough to see Charlie Musselwhite at the Coach House, which is a cavernous place, bigger than I remembered, and filled with old hippies wearing Hawaiian shirts and bitching about how much it cost to buy a beer. I spent the night by the train tracks, just because I like the sound. Also because I was already drunk (having not been fazed by the price of beer) and going anywhere else seemed like a bad idea.

I drove over the mountains and across the desert into Yuma, mostly because I hadn’t been that way in a while. The traffic has gotten crazy there, snowbirds driving 20 miles-an-hour and clogging up every street. Lots of license plates from Alberta and Massachusetts and even Alaska. Lots of old people in straw hats, taking their time. I would not want to be in an Applebee’s there anytime around 5 pm. You could die in a slow-moving stampede.

Somewhere between Yuma and Tucson, it occurred to me that I’ve been living in the Traipsemobile for six months now, long enough that this seems like a normal life. There’s always – for me, anyway – a point when you move into a new residence and, even though your furniture is there, it feels like a strange place and you can’t imagine that it will ever really be home. And then, without realizing it, you internalize where everything is – how to find the light switch in the dark, the trick of getting the hot water just right in the shower, how to spy on the neighbors without them seeing you – and it feels like you’ve been there all your life.

And that’s how I feel about the Traipsemobile now. Wherever I’m parked for the night – in a strip mall in Yuma, on the University of Arizona campus in Tucson, at a funeral home in Fredericksburg, Texas – I close the curtain and feel like I’m home. The cup of water is over here, the nighttime medications over there, the plug for charging up the Iphone right under the bed. It’s gotten so familiar – so normal – that I wake up sometimes to find that I’m parked in a new location. Once the curtain closes, the outside world disappears. 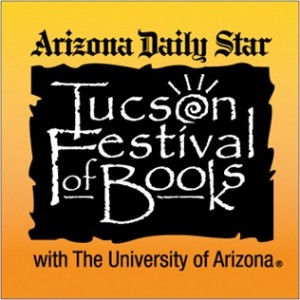 So I woke up in Tucson surprised to find that the empty parking lot I’d pulled into was now full of other cars, crowds gathering for the Tucson Festival of Books. They seemed equally surprised to see this bleary-eyed guy crawling out of a vehicle they’d assumed was unoccupied. I just nod, say “Hi, how ya doing?” and keep going. Kinda freaks them out.

I’d wanted to see Elmore Leonard give a presentation at the festival, but he got stuck in Detroit or something. I always thought he was a kind of a pussy, anyway. So I had to settle for watching an old friend of mine, Leo Banks, moderate a panel on “Writing About the West,” one of those bullshit topics that festival organizers make up as an excuse to put 3 authors in one room, whether or not they’ve got anything in common. Usually, they don’t. 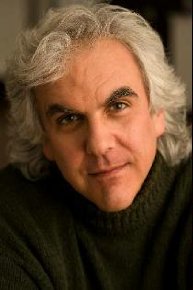 Stephen Fried and his hair

Leo had to deal with Stephen Fried, whose book “Appetite for America” is about Fred Harvey, the guy who pretty much invented the idea of chain restaurants and hotels in America in the early 20th century, running the establishments along the railroad lines and highways that brought tourists to the American West. Fried likes to talk about himself and seems to spend a great deal of time on his hair. “This guy’s gonna be trouble,” Leo said as soon as he saw him.

Michael Hiltzik from the Los Angeles Times wrote “Colossus” about the building of the Hoover Dam. He’s a serious guy, a former foreign correspondent, Pulitzer winner, now writing about water issues in the west. Dull as dirt, actually. But not likely to cause any problems.

And then there’s Jeff Guinn, a buzzcut good ol’ boy from Texas who used to write for the Fort Worth Star Telegram and likes to do books about people getting shot. He wrote about Bonnie and Clyde and now he’s got a book about the OK Corral, the much-mythologized gunfight that has been retold in a thousand bad westerns and just as many gangster raps. Wyatt Earp, Doc Holliday, all that stuff. Tombstone has turned itself into a bad tourist attraction, with gunfight re-creations and gift-shop abominations. Guinn’s book, supposedly, is about de-mythologizing the thing and telling us what really happened. It’s called “The Last Gunfight” and it comes out on May 17. Jeff Guinn likes to mention this date. A lot. 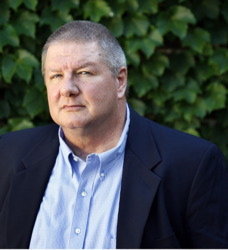 What you’ve got here is three  guys who like to talk, each of them trying to sell books in an increasingly cutthroat marketplace. Publishers, even big ones, don’t have marketing campaigns anymore. They leave it to the authors to get out there and bark it up. You can’t just be a writer. You’ve got to be a hustler, too. Fried and Guinn are very good at this. Hiltzik not so much. But what does he care? He’s got a Pulitzer.

You know how this ended up, of course. Leo asked a couple of general, “Tell us why the audience should give a shit” kind of questions and let them have at it. Fried goes off on some lengthy, very lengthy, treatise on how Fred Harvey was Howard Johnson before there was a Howard Johnson’s. No one notices because they can’t stop looking at his hair.

Guinn, getting antsy on the other end of the table, keeps rolling his eyes at Leo, the international signal for “Is this guy ever gonna shut up?” Leo, to his credit, is looking for an entry point but Guinn finally decides to bust into Fried’s monologue with,  and I’m paraphrasing here, but not much, “Once of the difference between academic historians and journalists is that, as journalists, we’re forced to get to the point more quickly.” Then he looks at Fried. “Although I guess that’s not always the case.”

The audience laughed and then went back to looking at Fried’s hair. I thought Guinn might be armed, so I pretended to have a coughing fit and left the auditorium. Leo asked Hiltzik a question about dam-building. Statistics involving cement were mentioned. I heard no gunfire and went back in. Everything seemed to have settled down. 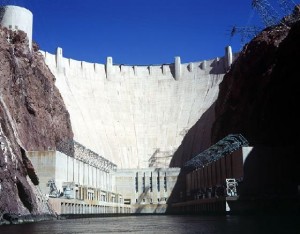 This was all on C-Span, by the way. And I’m sure they’ll replay it a dozen times on Sunday afternoons for the next 5 or 6 years. Guinn and Fried left from opposite sides of the stage. There was no shaking of hands. But, on the bright side, no one pulled a piece.

It was, for a book fair, kind of entertaining. Although it would have been better if Elmore Leonard had showed up. I went back to the parking lot and crawled back into my house.

“Hi, how ya doing?,” I said to the lady in the gigantic straw hat, who was parked next to me and seemed confused by what I was doing. And, much of the time, so am I. But then I get back in the Traipsemobile, close the curtains and everything seems normal again. 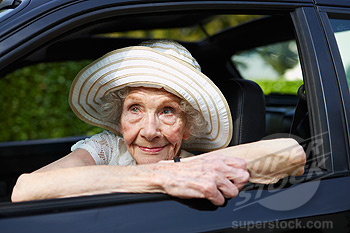 Coming this fall on Newsmax: The Rittenhouse-Cawthorn Report.
- Wednesday May 18 - 4:39am

I assume decorum will be paramount during the Pennsylvania Senate GOP recount process. Wait. What's that? Is that Donald Trump's music?
- Wednesday May 18 - 3:15am