So where were we? Oh yeah, in Carthage, Texas, sleeping in my mom’s driveway.

That I’ve gotten to the point where I’d rather sleep in the Traipsemobile than in my mom’s guest room says a lot about how comfortable I’ve gotten with my mobile man cave. If the weather is really cold (or really hot) then, sure, I’ll accept an offer of climate-controlled accommodations. But if it’s above 35 (or below 75) then I’d much rather sleep in my own home.

I can tell this still puzzles some people. They look at me as if I’m insane. “Why in the world would you sleep in a van when I’ve got this perfectly nice guest room here, with a bathroom and a reading lamp and all these stuffed animals and giant pillows all over the bed because, honestly, we don’t think of it as a place to sleep, but really as more of a shrine to our deceased child and the teddy bears she continued to love way past an age where it was remotely appropriate, which is why her boyfriend shot her. So, please, make yourself at home.”

But I AM home. I have a bathroom. I have a reading light. I have my nightstand with all my crap just where I left it. I can reach the refrigerator from the bed. I can find the toilet without turning on the light. I have my pillows, my comforter, my music and tv. I have my Tempur-pedic mattress topper, my c-pap machine and – let me say this again – A REFRIGERATOR I CAN OPEN WITHOUT GETTING OUT OF BED! Why in the world would I choose to sleep anywhere else?

Also, I can leave in the morning without telling anyone goodbye. I’m in. I’m out. I’m like Navy SEAL Team 6, except I guarantee they cannot open the refrigerator from their beds. So, in that way, I am much much better than them. 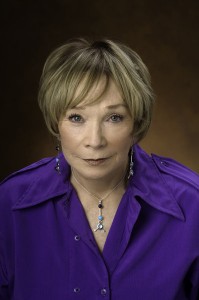 I’ve been going back to Carthage fairly regularly over the last month or so, wrapping up the research for the “Bernie” story, which I swear I will actually write in the next few weeks. I have things to do before that, of course. This beard doesn’t trim itself.

But it was important that I talk to my mother and sister, in town from Charlotte, N.C., about their memories of Aunt Marge and how she got to be such a merciless autocratic bitch, a woman so haughty and unyielding that, when her manservant shot  her in the back, a lot of people in Carthage went, “Well, yeah, who could blame him?”

If you’ve been reading these dispatches on a regular basis, you know they’re making a movie about this and that Shirley MacLaine is playing Aunt Marge.. I was on the set. We hung out. It’ll all be in the “Bernie” story. I promise.

Shirley has been touring the country promoting her new book, “I’m Over All That,” in which, apparently, she talks about all the things that no longer interest her, including her lengthy open marriage. It didn’t seem to interest her that much when she was in it, since a lot of the book is about all the men she slept with while she was married. Bill Clinton, shockingly, was not among them. 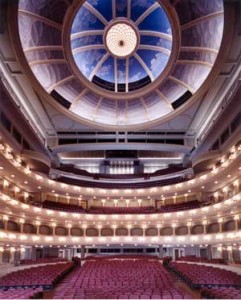 She was doing the show in Fort Worth, at the hoity-toity Bass Performance Hall, charging up to $80 a seat for people to watch her watching old clips of herself. This is why killing Bin Laden will not be the end of Al Qaeda. We find new ways to aggravate them every single day. “

“Paula Abdul and Simon Cowell together again? Somebody strap on a dynamite vest right now. We’ve got work to do.”

But enough about me and my future plans. What I’m saying is that it was high time for Shirley MacLaine to meet my mom. And Fort Worth was the perfect place to make that happen.

I had Shirley’s cel phone number and got her at home in Santa Fe. I wasn’t sure if she’d even remember me. I’m still not sure. But she was polite enough to give me the number of her road manager. “Tell him I told you to set it up,” and then she went back to whatever she was doing, which most likely involved some combination of crystals, Andromedans and gin.

I’ve gotten along fine with my mother for the last 10 years or so. When I was growing up, though, we weren’t exactly close. Actually, I went years at a time without speaking to her, a trait that seems to run in our family. Aunt Marge and my mom didn’t talk for the last 5 years of her life. My cousins, Spencer and Cindy, don’t talk. I went two decades without speaking to my brother. I blame genetics. And the fact that my relatives refuse to concede the obvious point that I am always right. I mean, really, how hard can that be? Just admit it and we’ll move on. 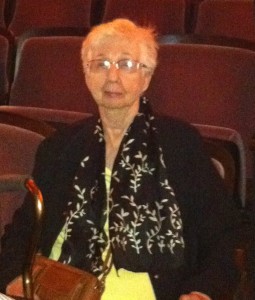 My mom at the Bass, waiting for Shirley

My point being that I had not been on an overnight road trip with Mom since I was in junior high. We’d be driving three hours to Fort Worth,  seeing Shirley’s show, spending the night and then driving three hours back to Carthage the next day. We haven’t spent that much time together in a vehicle since I got my driver’s license.

But here she was, strapped into the Traipsemobile passenger seat, riding with me down I-20. My Ipod selection didn’t seem like the right musical accompaniment. She’s not that big on The Ramones. So I found a “classic show tunes” station on Pandora, which seemed to her please her. She sang along with practically every number and I now know more songs from “Wicked” than any straight man should.

She’s 83 years old, my mom, seven years older than Shirley. And a year older than Marge was when she got shot and stuffed in the freezer. This has given her a weird kind of pride. Finally, she got to do something Marge hadn’t done.

There will be more of this in the “Bernie” story, but I am struck by how often Bernie and my mom use the same basic descriptions of their relationship with Aunt Marge. She bullied them both. She treated them as if they were her playthings. She was abusive, imperious and brooked no disagreements of any kind. Bernie was the one who shot her , but I guarantee he wasn’t the first one to think about it.

We made it to Fort Worth around 6 p.m., two hours before the show. I checked mom into the Omni Hotel and found a place for the Traipsemobile a block and a half away. And, yes, that’s where I spent the night.

The crowd at the Bass Performance Hall seemed to be made up almost entirely of older woman and young gay men, Shirley’s go-to demographic. There were also some turquoise-wearing women, many of them clutching one of Shirley’s books about past lives and/or talking to space aliens. Most of them would ask questions at the end of the evening, often consisting of, “I love you so much, Shirley. Thank you for getting this information out there.”

But, until then, Shirley didn’t talk much about that stuff. There were childhood photos of her and Warren, shots of her days as a chorus girl. Broadway parties. Hollywood parties. Las Vegas parties. Anecdotes about Hitchcock and Fosse and Nicholson. There were photos of her with Kruschev, Indira Gandhi, JFK. She talked. She clicked. She talked some more.

She made only passing references to the “Bernie” movie, both of which made my mom sit up straight. She  volunteered that it was going to be “very funny,” a notion my mom hasn’t quite embraced. She knows the circumstances were bizarre and absurd and that the movie, necessarily, will be a dark comedy. But the notion that her sister’s murder is “funny” still catches her off-guard. 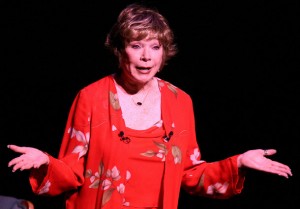 Then, when Shirley was asked by an audience member to name the worst director she’d ever worked with, she quickly answered, “the last one.” By this, she meant Richard Linklater, who directed “Bernie” and whose laid-back style never really made sense to her. She came up in the era of dictatorial directors. Linklater doesn’t give orders so much as suggestions and sometimes, not even that. This made her crazy. She’d said as much to me on the set. And now she was saying it in public. Hoo, boy.

She was on stage for more than two hours and sometimes the best part was watching her watch herself, especially during dance scenes. You could see her half-miming the choreography in her chair, as if she’d suddenly developed Restless Leg Syndrome.

There was a long line of worshippers waiting outside the stage door, all the ones who’d asked questions and dozens of others who’d been too shy to go to the microphones. I led mom past them and elbowed our way to the front.

“This is Marge Nugent’s sister,” I said to the guard. “Ms. MacLaine is expecting her.”

And, I’ll be damned, she really was. There was a small cluster of other people in the backstage corridor but upon seeing my mom, Shirley deserted them and came straight for her, arms outstretched. I introduced them, but I’m not sure I needed to. They’d already bonded.

“I’m happy you came,” Shirley said. And they didn’t say a whole lot more than that. Except that both of them, Shirley as much as my mom, teared up while they hugged. It lasted a while. Not as long as when Bernie hugged me in prison, but a while.

There was chit-chat in between, mostly me telling Shirley what I knew about the film and it’s distribution prospects. (It’s being marketed next week at the Cannes Film Festival and will likely find a U.S. distributor there.)

But she never left my mom’s side. They hugged again before we left. “I will see you again,” Shirley told my mom.

And that was it. Maybe a five-minute encounter. But both of them clearly had been quite moved. Mom said it was even better than the time she met Errol Flynn in New Orleans. Or even that time, when she was 16 years old at a concert in Austin, when Frank Sinatra tossed her a rose.

“I think we will see each other again,” mom said later, drinking white wine at the hotel bar.  She went up to her hotel room. I went back to my home in the street. 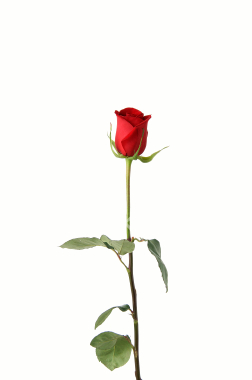 @Wildaboutmusic Bringing in a couple of keys? I mean, probably, you are. For your house and your car, at least.
- Friday Dec 2 - 3:18pm