So, where were we? Oh yeah, at the “Bernie” world premiere in downtown Los Angeles.

Because people wanted to hear about that in a timely manner (as opposed to my usual timetable, “Whenever the fuck I get around to it.”) I posted the “Bernie” dispatch out of sequence, instead of pseudo-chronicling a month’s worth of Traipsing between New Mexico and Colorado. This has, I’m sure, shattered  your expectations of  how The Traipsathon, and thus the Universe, is structured. There have probably been suicides. My apologies.

To make it up to those of you who found the courage not to kill yourselves, I’d like to go back and fill in some of the gaps. And then everything will be back in its proper chronological place and we can proceed with our slow, orderly descent into oblivion, despair and the inevitable obliteration of life as we know it. Also, there will be beer. 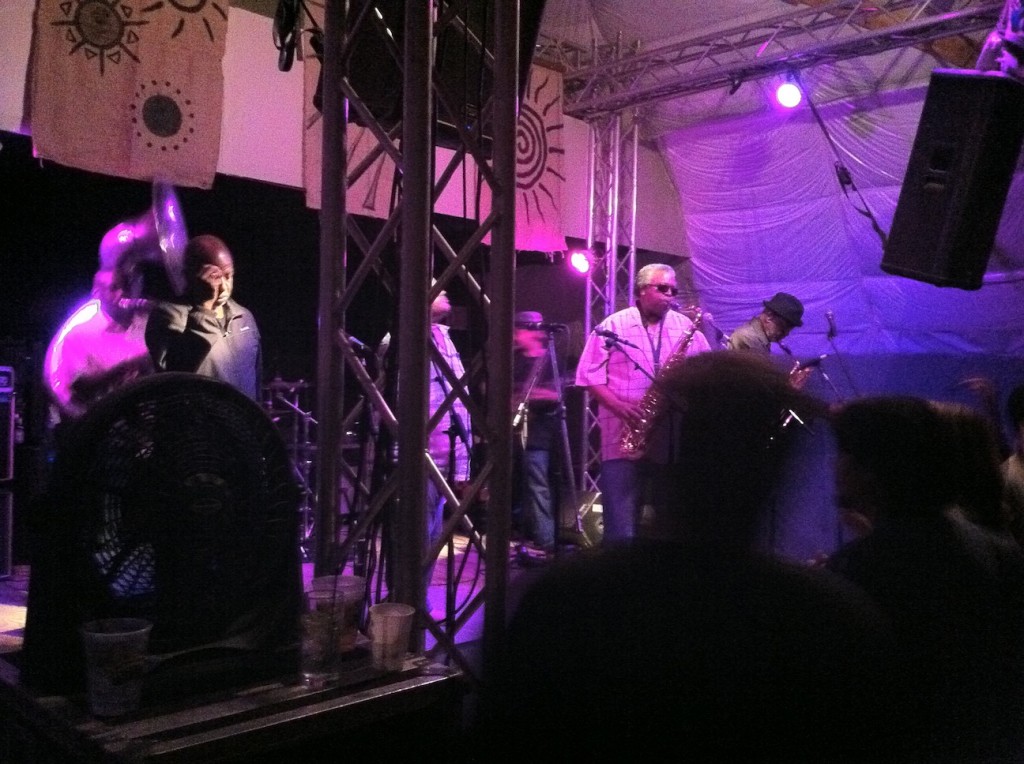 The Dirty Dozen Brass Band, wondering what they've gotten into.

After hiking Elizabeth’s Trail  outside of Santa Fe, I went north to Colorado, stopping overnight in Taos to see the Dirty Dozen Brass Band play second-line funk in this truly odd complex called the Solar Center,  which is a bar/radio station/solar-powered fun center on the outskirts of town, on the road to the Taos Ski Valley. There are hippies there. Lots of really old, hemp-wearing, still-got-their-Birkenstocks, can’t-dance-for-shit hippies.

I understand that when you’re at a Phish show or full of mushrooms and jamming with whatever surviving Grateful Dead members are crashing at your yurt, then you don’t dance really, you twirl and trace the imaginary colors with your hand. That’s fine and why God made Psilocybin.

But you don’t do that when there’s are guys from New Orleans, serious Brass Band guys, playing “Little Liza Jane” with a Sousaphone blowing out all the bass parts. You don’t have to dance. You don’t have to promenade. But you do NOT twirl. Especially if you’re 78 years old and look like Pa Kettle on acid. Put your hands back in your overalls, Grandpa, go outside and smoke whatever’s in your corncob pipe. When they start playing “Turkey in the Straw,” we’ll call you and you can go back to that chicken-flap boot-stomp thing you were doing. 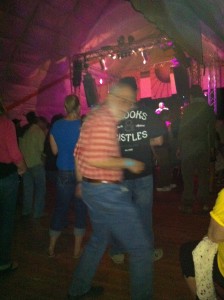 From there, I took US 285 up into Colorado, across the Rio Grande, past the collection of half-buried Earthship residences,  made out of everything from tires to beer bottles, that dot the desert northwest of Taos and look like they were imported directly from Tattoine. This was also the stretch of road where some of the best “Easy Rider” highway scenes were filmed, the ones with Jack Nicholson riding on the back of the motorcycle wearing a football helmet and flapping like a bird. Holy shit. I just figured out who taught Taos how to dance.

It takes a while to come up on the Rockies from the south. You can see them for a hundred miles before you start to climb out of the hot, flat landscape. And then, boom, the temperature drops 20 degrees, you go through a pass and find yourself surrounded by snowcaps and meadows. I spent the night in Buena Vista, where everyone seems to be preparing to climb or jump off something. Also there is a spectacular little cafe there, Mother’s Bistro (and it’s after-dark spin-off, Daughter’s). You can whitewater raft, rock climb, mountain bike and then drink beer. I did exactly one of these things.

I spent a few days with a friend in suburban Denver before drifting southwest towards Durango, which is a much cooler place than I’d imagined. In other words, there are plenty of bars. There is also the Durango & Silverton Narrow Gauge Railroad,which on this particular Saturday night was running a Blues Train   on it’s 45-mile route up the Animas River. It’s an old steam train that wheezes up the gorge, squeezes through passes and gives you a view of some of the most spectacular scenery in southern Colorado, on a line that was built  in the late 1880’s to haul ore out of the remote silver mines. After the silver played out, the train stopped running, but came back to life during World War II, when the government started mining uranium. I wonder what that was for? 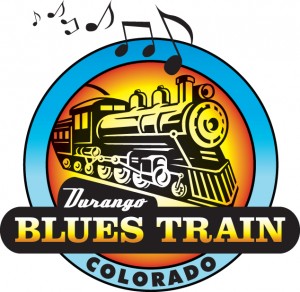 It’s been running as a tourist train for the last 40 years, with coal-fired steam engines from the 1920’s , 5  passenger cars and two “Party Cars” basically open-air platforms with canvas tops. I think you can see where this is going.

They had an acoustic blues act in each of the five passenger cars, guitarists mostly, but one car featured Big Jim Adam and John Stillwagen  (from Colorado Springs) who’d ripped out a bench and somehow managed to jam an electric keyboard (hanging partly out the window) in it’s place. There were strings of white Italian lights in every car and just enough room for people to continuously trip over each other as they lurched by, a drunken parade that got more chaotic as the night wore on since there was, of course, a bar car.

In the opposite-end Party Cars, there were full electric bands, enough room for dance floor and not nearly enough things to hang onto. Eric Boa and The Constrictors were at the rear of the train, The Otis Taylor Band  at the front. 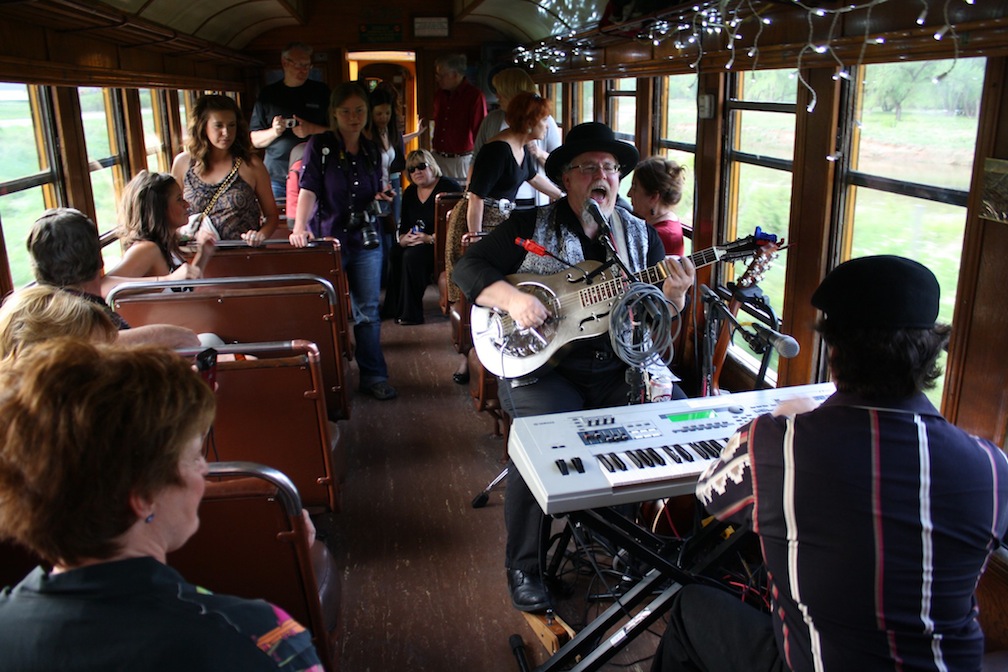 We left Durango right at sunset, all of the musicians trying to match their time to the click of the rails. The songs were slower as we climbed, faster in the flat spots, not that there were many of those. This didn’t last, of course. By the end of the night, everyone pretty much decided to just turn up the volume and set their own tempo. But, before it got dark and everyone got drunk, there was something gentle and organic about the whole thing, the train chugging along, the songs chugging along, me chugging along. And then burping. 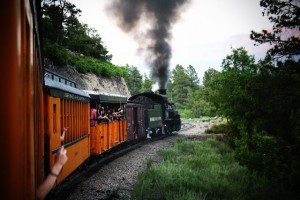 The Telluride Blues Festival put the thing together and it wasn’t a cheap ride, $180 for the evening, which I assumed would include food and beverages. It did not. But, still, I can’t say it wasn’t worth it. Listening to a guy singing “Mystery Train” while you’re on a train, looking at a sunset-stained gorge, passing ski lodges and – for reasons I still cannot explain – an estate with llamas on a tennis court, how do you put a price on that? You can’t really.

There was your usual assortment of drunk frat-boy types and pseudo-hippies. There was one wild Gypsy Woman with long black hair and tortoise-shell glasses and a gigantic Jade Buddha tattoo covering the entirety of her exposed back. And, God Bless her, there was a woman in her late 70’s, in a  tie-dyed t-shirt and a knit cap, clearly stoned out of her mind, flitting from car to car, dancing (kind of) to every band. It was like seeing your grandmother completely looped and, frankly, having the time of her life. 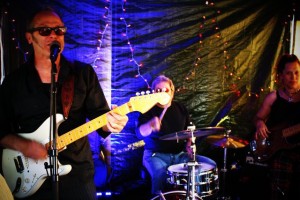 Inevitably, as we passed through the narrowest gorges, the rock face mere inches from the train, drunk people were sticking their heads and arms out the window to see how close they could come to the cliff. I was not aware of any decapitations, but I’m not sure anyone would have noticed.

It was nearly midnight by the time we got back to Durango. By then, if you encountered someone who  didn’t have beer stains on their lap, then you knew they hadn’t actually been on the train. It took a while to get back to the Traipsemobile, which wasn’t really that far away (I spent the night in the train station parking lot). But I had a hard time keeping my balance, now that the ground wasn’t moving beneath me. What I should have done, in retrospect, is stick out my arms and flap like a bird. I’m pretty sure that helps. 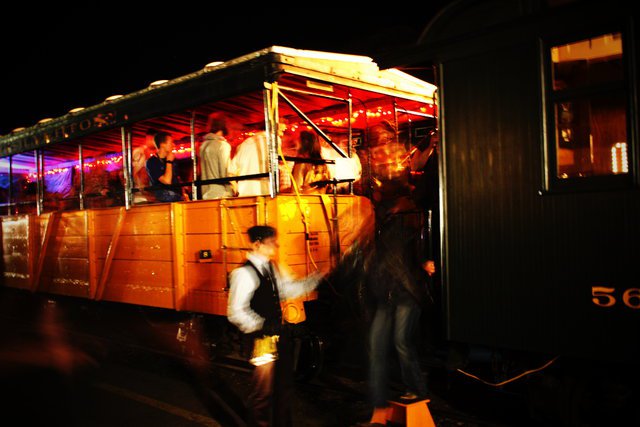 If You Want To Be A Bird

@Wildaboutmusic Bringing in a couple of keys? I mean, probably, you are. For your house and your car, at least.
- Friday Dec 2 - 3:18pm