So, where were we? Oh, yeah, headed for Milwaukee because Illinois – like Missouri before it and Kansas before that – was too damned hot. Global warming is not my friend. 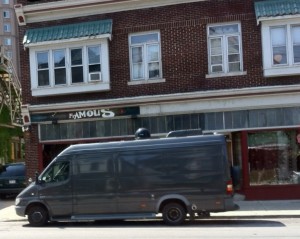 The Traipsemobile in Milwaukee

You know who IS my friend? Beer is my friend. And also tv. And Texas music. Those are my goddam friends. If only there had been some place in Milwaukee where I could combine all three. But, wait, there WAS!!! Dale Watson, bless his Johnny Cash-lovin’ rockabilly heart, was playing in the Fire Pit’s Side Bar at the Potawatomi Bingo Casino in Milwaukee, a horrifying cavern of a building filled with bell-and-whistle slot machines and cigarette smoke and gigantic fake trees. The décor, schlocky in the extreme, was all fake bear rugs and fake fireplaces with fake fires, fake muskrat traps, fake snow, fake everything. It’s like The Grove, only with log cabins.

And off in the corner, where the new fake Fire Pit was under construction, was the Side Bar with a multitude of real tv screens and, set up to play on the tiny stage, Dale Watson and his Lone Star band.. On the TV’s, the NBA Finals. So, let’s recap: NBA Finals to the left of me, Dale Watson to the right of me, beer directly in front of me. Generally, I don’t enjoy multi-tasking. Hell, I don’t even enjoy uni-tasking. This, however, I could handle.

There were some hard-core fans in the room, dressed in their Dale Watson sleeveless work shirts, telling so many stories about Dale and the road that I thought they were roadies. They were big and burly, mullet-haired and heavily tattooed And it turns out they were women. I didn’t realize this until they turned around. 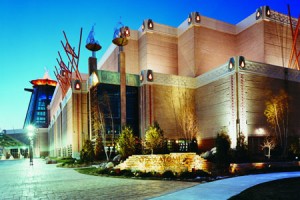 They knew Dale, who looks like a shorter, stumpier and whiter-haired version of Billy Bob Thornton,  and Dale knew them. He dedicated songs to them. They hooted. They hollered.. They bought him drinks (Pabst Blue Ribbon, because Lone Star wasn’t available. “It’s the Lone Star of Wisconsin,” Dale said, accepting the tribute and the tequila shots that were soon to follow.) And, as the night went on, these big burly women, who I’d mistaken for truck-driving men, began to dance. Slowly. And gracefully, their eyes closed, the stage lights hitting their small diamond earrings, their blue eye shadow visible for the first time. They were lovely. They were poignant. I never found out where they were from or how often they’d danced to Dale Watson singing his rockabilly country songs. But it made me happy to see them there at the Potawatomi Bingo Casino, dancing by the Fire Pit’s Side Bar.

From there I wandered up the edge of  Wisconsin, along the western shore of Lake Michigan, past hundreds of lake houses with hundreds of “For Sale” signs. Past mailboxes shaped like bears and badgers and one that I think was supposed to be Ed Gein. Past dunes and small islands and hidden coves. Through Sheboygan and Manitowoc. Through Sturgeon Bay, all the way to the end of the Door Peninsula and finally, by ferry, to Washington Island. And to the oldest continuously-open bar in Wisconsin, or so they claim: Nelsen’s Hall. Home of the Bitters Club. 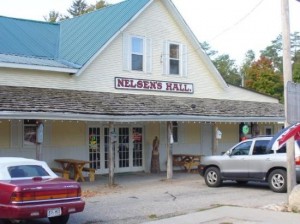 Turns out that Tom Nelsen, who opened the bar in 1899, drank a whole lot of Angostura Bitters, cause he thought they had wondrous medical properties. Also they were 45 percent alcohol. So when Prohibition started, Tom got himself a pharmacist’s license so that he could dispense the bitters as “medicine.” This is why Nelsen’s Hall never had to shut down.

They still sell the stuff, lots of it and the current owner swears it cures just about everything, including flatulence. If you order a shot of Bitters, you get to join the Bitters Club. Which is different than the Bitter Club, of which I am a charter member. And no, I didn’t drink any goddam bitters. I drank beer and watched the NBA game on tv. I’m not your puppet, goddammit!

The other thing they do here, and I was just drunk enough to be amazed by it, is wrap quarters in dollar bills and throw them at the ceiling where a bunch of ‘em stick. How do they do that? It looks like an ordinary white-painted wooden ceiling. Do they wedge between the slats? Are there magnets behind it? Can I get another beer?

After spending the night in the parking lot, I took the ferry back to the mainland, sat in the Traipsemobile, looked out through the windshield and pretended I was driving across the water. I still might have been a little drunk.

I made my way around Green Bay and onto Michigan’s Upper Peninsula, hugging Lake Michigan’s northern shore – which is gorgeous — most of the way. More coves. More forests and more “For Sale” signs. If you want waterfront property, there are deals to be had up here.

I spent a night in Escanaba (which I’m pretty sure is an old Lyle Lovett tune. No?), crossed the Mackinac Bridge, just to say I had, and eventually ended up in Sault Ste. Marie, “the Soo” as the locals call it and the place where ships, mostly giant freighters carrying iron ore and, I think, taffy make the transition from Lake Superior to Lake Huron, which is 21 feet lower. Water slides, apparently, don’t work for ships. 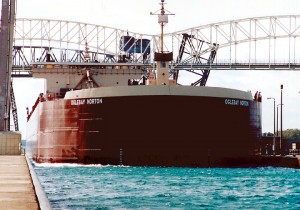 They built the first version of “Soo Locks” in the 1850’s, with newer and bigger versions being constructed five or six times in the decades since. Before that, ships had to be portaged, on  wooden rails, through downtown Sault Ste. Marie. I’m not sure where exactly. I think it’s near Portage Street. Someone should probably look this up.

What I’m trying to explain here is that going through 21-foot locks is extremely cool but not particularly exciting. It’s like being in a giant bathtub and waiting for it to fill up enough for you to move around without scraping your butt on the bottom. Or trapping the rubber ducky in your crotch. Oh, right, like that’s never happened to you.

Speaking of maritime disasters, they love them here. They talk about shipwrecks almost as much as hockey. Gives the place a certain pathos and, I guess, makes everyone feel a little luckier just to be alive. Almost every bar, every restaurant, every hardware store has a photo of some doomed vessel. Or a scale model. Or, if at all possible, some bit of wreckage. You look out at Lake Superior, massive and gray and it’s hard not to think about how often people have died out there. In the winter, it must be even harder, when the trees are bare, the skies are gray and the water is even grayer. 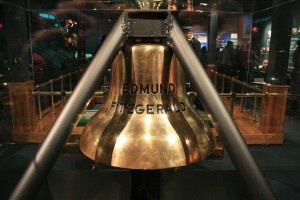 At Whitefish Point, which juts out into Lake Superior about 70 miles northwest of Sault Ste. Marie, is the Great Lakes Shipwreck Museum, which has lots of memorabilia (including the ship’s bell) from the Edmund Fitzgerald and, yes, they play that damn song constantly, so much that after a half-hour at the place I believe Gordon Lightfoot would just punch himself in the face.

There are detailed models of pretty much every major shipwreck that’s occurred in Lake Superior, and there have been shitloads of them. The Edmund Fitzgerald went down just 40 miles from there. It’s a cool exhibit actually. Among the things I didn’t know is that all the crew members were American, mostly from Michigan and Ohio. I’ve always thought of it as a Canadian ship, because of the song, I guess, but it wasn’t.

The ships, mostly giant ore freighters, that make it to the locks without sinking,  tend to be filled with guys who really want a drink, which is why downtown Sault Ste. Marie, and the upper peninsula in general, is loaded with bars, mostly no-nonsense beer-and-a-shot kind of joints. There are so many bars in Sault Ste. Marie (13 bars in a three-block area) that one guy calls it, “the Barmuda Triangle, where people go in and are never heard from again.”

The guy who said that, to me, sitting in a bar in downtown Sault Ste. Marie called Moloney’s Alley, is Kevin Kluck, who was explaining why he and his just-out-of-college son Randy spent a year going to EVERY BAR IN THE UPPER PENINSULA and have self-published a book about it, which I purchased immediately. It’s called “Yooper Bars”, cause apparently if you live in the U.P. you’re a yooper. I like this. 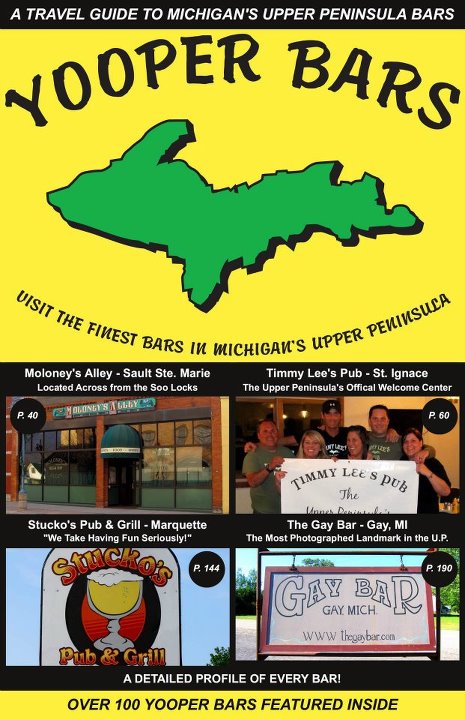 Kevin and Randy drove 47,000 miles , went to 109 bars and published a guide with pictures, prices, each one’s house specialty drink, history and best-ever celebrity visitors (Jeff Daniels’ name turns up a lot, as do Kid Rock and Sparky Anderson). This may be the greatest book ever written and certainly the best one if you want to know what they charge for a 24-ounce beer at The Jack Pine Bar and Grill in Kinross ($3.50). Here are some excerpts:

The Bomb Shelter Saloon (Sault Ste. Marie, MI) : “originally build as a bomb shelter by Finnish immigrants . . .The lowest elevation of any bar in Chippewa County.”

The Hard Rock Bar (Negaunee, MI): “has the largest documented urinal in the U.P.”

Jack’s Tee Pee Bar (Ishpeming, MI) :“one of the opening scenes for “Anatomy of a Murder” was filmed in what is now Jack’s Tee-Pee Bar.”

The Gay Bar (Gay, MI): “Home of the Most Photographed Sign in the U.P.”

Now that, my friends, is journalism.

We sat in Moloney’s for a while, talking about writing and drinking and pickled eggs, the write-up he and Randy got that day in the Sault Ste. Marie Evening News. He talked Randy into doing the book, because the kid was just out of college and couldn’t find a job. It was more a father-son outing than anything and you can tell Kevin’s enjoyed it way more than Randy did. Kevin wants to write a novel, but I’m encouraging him to pursue his other dream, which is writing a guide to every bar on Highway 1 between Miami and Key West. And when he does, I will personally nominate him for a Pulitzer Goddam Prize.

Is it just me or does Iran have a shitload of matinee idol-looking motherfuckers on their team? #WorldCup
- Tuesday Nov 29 - 8:31pm