So, where were we? Oh yeah, waking up in Sioux City, Iowa  because there was a police officer pounding on the Traipsemobile door.

It was 8 a.m. on a Monday, not my usual wake-up time. I’d fallen asleep around 2 a.m. in what appeared to be a nice quiet doesn’t-seem-illegal parking spot, not too far from the coffee shop where I planned to start my day at the crack of noon. What I hadn’t noticed, it being nighttime and me being new in town and slightly fuzzy brained, was that I had parked directly in front of an elementary school.

Most of the time I feel confident parking The Traipsemobile pretty much anywhere overnight. In Vermont, I even parked in a city hall employee lot, just to see if anyone would notice. They didn’t. But I really try to stay away from grade schools and playgrounds because, after all, take away one “T” from my license plate and it says “RAIPS.” I don’t need people jumping to any “Silence Of The Lambs” kind of conclusions.

Which, apparently, is what the principal of the Hunt Elementary School had done. The police officer, who may or may not have had his gun drawn (I couldn’t see past the glare of his flashlight) calmly explained that the principal had reported a “suspicious vehicle with blacked out windows” in front of her school.

They couldn’t have been nicer, the Sioux City cops, waiting patiently for me to find my pants and the paperwork that might establish my non-rapist identity. It wasn’t so much a roust as a pleasant early-morning chat. Once they’d confirmed that I had no priors or warrants, they suggested (not ordered, mind you, suggested) some better places to park and sent me on my still-groggy way.

And that’s how I started my first morning as a political volunteer. I eventually found my way to the Sioux City Obama For America headquarters, a rented run-down red brick office building across the parking lot from the LaJuanita Mexican restaurant and just up the block from the always-hilarious- Kum & Go convenience store.

It was a dreary place, especially on cloudy 30-degree days. There were unmatched tables and chairs, scratched-up office furniture, phones that worked only intermittently. The back door didn’t quite lock and the front door was always open. The Christie Vilsack Congressional campaign had a single office in an interior hallway. The 2012 Obama campaign was a marvel of high-tech wizardry, a seamless cyber-charged machine. But the physical working spaces looked like the back room at a Goodwill Store. 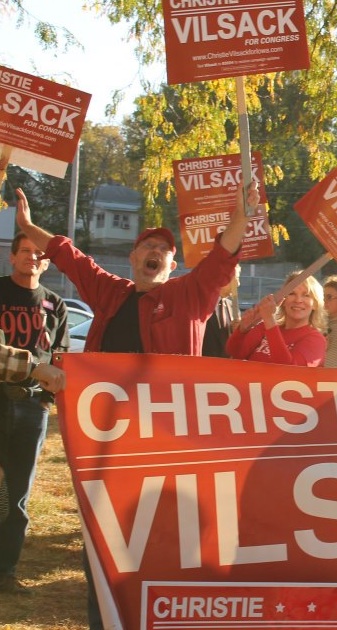 Still, the place was buzzing. Mostly with paid Obama campaigners who were constantly on their cellphones being updated from some unknown, presumably better-furnished, central office. There were local volunteers working the phones, when they worked. Mostly, they were using campaign-issued cell phones, reading off scripts, checking off forms, doing the tedious business of finding out the intentions every single voter in the district and offering to help the ones who were leaning their way; making sure they’d received their mail-in ballot, that they were properly registered, asking if they’d need a ride to the polls. It was endless. It was tedious. And it was what I had come here to do.

Ashley Sinha,  20 years old and diligent beyond description, was the one and only full-time Christie Vilsack campaign worker in Sioux City, the largest city in the Congressional district. Until I got there she’d been doing most of the canvassing – and pretty much everything else, all by herself. A 20-year-old woman has never ever been this happy to see me.

I spent the morning, what was left of it, on the phones. This consists mostly of getting wrong numbers and voicemail messages and throwing those names back into the computerized hopper for someone to try another day. Most of the people who did answer the phone were inclined to describe themselves as “undecided” because, as Iowans, that seemed the polite thing to do. This was, of course, a terrible mistake. If you tell a political campaign that you are “undecided,” rest assured that they will continue to call until you Goddam Well Decide. So, even if you haven’t made up your mind, you should lie and say you are supporting the opponent of whichever campaign is calling. They will scratch you off the list. Your life will improve.

Then they sent me off into the field, with a computer generated map listing the addresses of the allegedly undecided. The questions were essentially the same as the ones we asked on the phone. But now, instead of being an anonymous voice on a phone, the questions were coming from a stranger on your doorstep, a pudgy guy in a red baseball cap who’d knocked on your door right in the middle of Dr. Oz. This elicited a number of reactions. 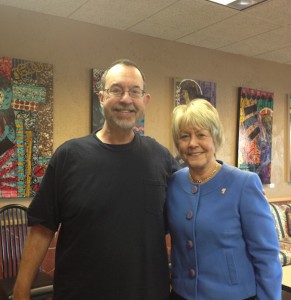 The candidate endangers her campaign by posing with a tubby hobo.

There was some abruptness, sure, but very little outright hostility. There were lots of “I’m not interested” brush-offs, a couple of people who seemed genuinely annoyed that you were trying to put Democratic Party brochures in their hands and who rejected it as if might physically contaminate them.

There were rules. I didn’t go through any locked gates. I didn’t leave any literature in mailboxes (a federal offense). I knocked or rang the bell even if it appeared that no one was home. And sometimes it was hard to tell. These were mostly-wood-framed houses in blue collar neighborhoods. They had front storm porches, usually behind a locked door and often overflowing with cardboard boxes and other assorted crap. I suspect there were “Hoarder” candidates just waiting to be discovered. But I trudged up and down hills, down unpaved roads, over broken sidewalks, ignoring the barking dogs and the occasional suspicious stares from the guy across the street who was working on his Harley. There seemed to be a lot of those guys.

I sweated on some days and shivered on others. I tried but never really succeeded to figure out a system that would strike the perfect balance between blocks walked and how often I would have to move the van. I lugged my clipboard and my red bag full of glossy brochures, my maps and my checklists and my pre-screened questionnaires. I was pretty much Willie Loman, except I wasn’t getting paid.

But – and this was an even bigger shock to me than it will be to you – I really enjoyed it. I did. I like encountering people and engaging them, even if my spiel was a little repetitive, even if it required more smiling and nodding than I’m generally inclined to do. I didn’t mind the rejections or even the occasional door slam. I didn’t take it personally. I got into a rhythm and I could see how politicians learn to love the glad-handing, the baby-kissing, the brief-but-important voter encounters. If not for my general disinclination towards work of any kind, I could see doing this for a living. 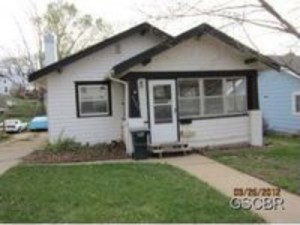 I knocked on many doors that looked like this.

Most of the voters I met, probably 75 percent, were registered Republicans and most of those, probably 90 percent, were going to vote for the Republican candidate, no matter what. But – and I can’t stress this enough – none of them were dicks about it. None of them. We talked about issues, I gave them my pitch, if they wanted to hear it. Sometimes they would counter. There was no screaming. There was no nuttiness. They weren’t right wing maniacs. They were rational conservative-leaning Iowans, who were going to vote Republican, not because they thought President Obama was a Socialist Kenyan Muslim or that Mitt Romney was a swell guy who understood their problems, but because they were socially conservative and generally leery of government. I did not hear Ayn Rand quoted once.

And a few of them – Republican women mostly – seemed as if I might have won them over. They were uncomfortable with Romney’s (and the incumbent Congressman Steve King’s) views on birth control and gay marriage. They were open-minded. And even if they didn’t vote the way I hoped they would, they were willing to listen.

I can’t tell you how much this thrilled me. You know that horrible feeling you get watching shrill idiots scream at each other on cable news and you think we’re just doomed as a civilization? This was the opposite of that. There really is a middle ground in America, a rational, reasonable place. I saw it on those front porches in Sioux City, Iowa. And it’s why, in the long term, I’m pretty optimistic that things are going to work out.

I spent three weeks in Iowa, most of it drudgery, but some of it fun. Bill Clinton spoke to a Sioux City rally for Christie Vilsack in downtown Sioux City. I set up a table and passed out yard signs and registration forms to people as they passed by. I schmoozed and smiled and, after a while, I realized I wasn’t even faking it. The speech was inspiring and funny and the crowd went wild for it. I ended up in the bar across the street, drinking beer with Bill Clinton’s advance man, who gave me his lapel pin, which he didn’t need anymore and said it would get me backstage if I wanted. Not that it mattered. Clinton was already gone. 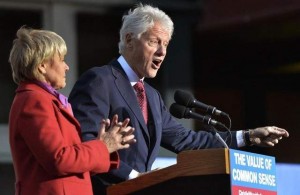 There were nights watching Presidential debates at the local pizza joint, booing and cheering like we were at WrestleMania.  There were”Charlie Boy” loose meat sandwiches at the Miles Inn, Lucky U IPA’s at the Soho Kitchen & Bar (emphasis on the Bar).  There was the Christie Vilsack-Steve King debate at Morningside College, where I waved my big red “Christie Vilsack For Congress” sign like a madman whenever a tv camera pointed our way and where, somehow, I ended up being interviewed on the local radio station. When they asked where I was from, I said, “Ames,” which wasn’t a lie, because that’s where I’d been before I got to Sioux City.

The night of the debate, one of the cops who was working security came up to me. It was the same cop who’d knocked on my door that first morning in Sioux City. He said he’d started following me on Twitter, which I loved. He also asked me if I’d ever Googled myself.

“Well, when we first checked you out, the first thing that came up for Joseph Rhodes was a mug shot of a sex offender.” Apparently police Google is different from regular Google.  I was’t sure where this was going.  “But it said he was born in 1984, so we knew it wasn’t you.”

Well, thanks. Sometimes it’s good to be old.

Barack Obama won in Iowa, as he did in all the swing states that night. Christie Vilsack lost her congressional race, but I’d like to think she came closer than she would have if I hadn’t been out there on her behalf.  Or maybe her willingness to be photographed with me cost her the race.  And, frankly, I warned her that might happen. She’ll know better next time.Which might be as soon as 2014. Steve King is running for Senate, abandoning his can’t-lose seat for a statewide race that he almost certainly can’t win. Given another opportunity , Christie Vilsack might very well win. There are Republican women on the porches of Sioux City who I know will give her a chance. 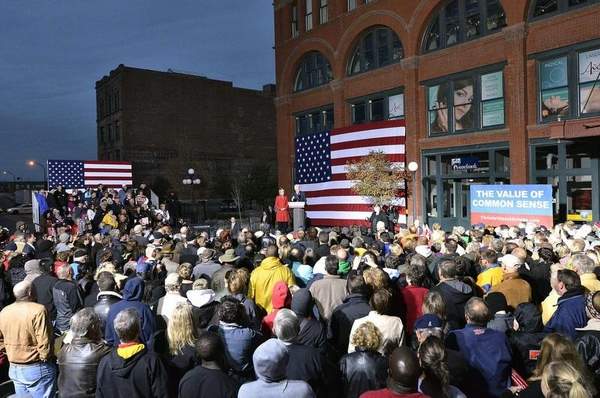 Downtown Sioux City, the night of the Bill Clinton Rally

Coming this fall on Newsmax: The Rittenhouse-Cawthorn Report.
- Wednesday May 18 - 4:39am

I assume decorum will be paramount during the Pennsylvania Senate GOP recount process. Wait. What's that? Is that Donald Trump's music?
- Wednesday May 18 - 3:15am