New York, New England, New Ways In Which I’m Kind of a Dick

Home/Dispatches/New York, New England, New Ways In Which I’m Kind of a Dick
Previous Next

New York, New England, New Ways In Which I’m Kind of a Dick

So where we? Oh, yeah, Medway, Mass., under suspicion but ultimately exonerated.

I’ve spent most of the last two weeks going back and forth between New York and New England, traipsing down wooded parkways where the leaves are just now beginning to turn color and into the land of toll booths and low overpasses, every one an exciting new episode of  “Guess the Clearance/Guess the Toll.” It’s exciting because you never really know the answer until it’s too late. 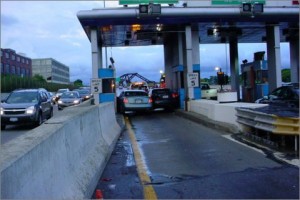 The Traipsemobile, officially, is a passenger van, registered in the same category as your average Astro Van. But, because it’s bigger, darker and seems more likely to be heavily weaponized, toll booth operators tend to impose their own views as to what kind of vehicle it is. Sometimes they charge the regular rate, the same $5 or $6 they charge everybody else for the privilege of crossing narrow-laned bridges or potholed turnpikes. But, sometimes, they decide the Traipsemobile, because it has six wheels, must have an extra axle, or is too tall for the regular rate, or must surely weigh too much. So they charge me double,. I pay them in nickels, so that the experience will be as much fun for them as it is for me.

As for clearances, I used to think that I needed at least 12 feet to survive, because that’s what all the warning stickers on the Traipsemobile, left over from its news van days, say. They’re quite adamant about it. Turns out it’s no longer true.

The Sportsmobile folks told me that new clearance, even with the black-dome satellite dish and the rooftop air conditioner, was less than 10 feet, probably 9-foot-6. This hardly seemed possible, but they swore it was true. Just to be safe, I promised myself that I would never go anywhere with a clearance lower than 10 feet. And, besides, other than parking garages, when is it ever going to be an issue?

On the Hutchinson Parkway, it turns out. There’s a reason commercial vehicles are allowed only on designated roads here in the Tri-State area, , your I-95, your New York Thruway, your big wide and – because they’re full of commercial vehicles- crowded and pockmarked highways. The parkways, all wooded and scenic are also crossed by a string of old, picturesque and not-particularly-tall bridges. 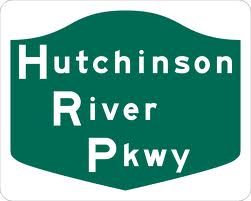 They usually give you plenty of warning, blinking signs and advisories as to what exit you need to take if you don’t want to shave off the top of your oversized rig, which shouldn’t be on the parkway in the first place, you idiot.

But, when it’s late on a Friday night, coming up from Manhattan, in drizzle and patchy fog, you don’t always see the signs, particularly the ones that don’t blink. So you might be bouncing along, able to see just a few feet in front of you, when you realize that you’ve just passed an orange sign that reads “Clearance: 9-6” and the bridge in question is mere yards away, no exit ramp available. 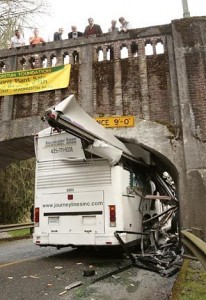 We now know, for certain, that  the Traipsemobile Mobile Command Center is no taller than 9-foot-six-inches tall. We suspect that the clearance may in fact be exactly 9 feet and six inches tall. We made it. We heard no scraping. We do not want to test 9-foot-five.

And that, believe it or not, was the most frightening moment the Traipsathon had in New York. This included parking in Greenwich Village, midtown Manhattan, Brooklyn and the Upper East Side. This included crossing Times Square in the middle of a tornado-producing downpour and navigating festival crowds at the foot of the Brooklyn Bridge. I’m now convinced the Traipsemobile can get pretty much anywhere.  For a while, even though it cost me $50 for the day, I believe i had the biggest and cheapest apartment on 45th Street, mere blocks from Times Square. In Brooklyn, I parked comfortably in Park Slope, tucked in with the Subaru’s, in front of the brownstones. They had their stoops. I had mine. 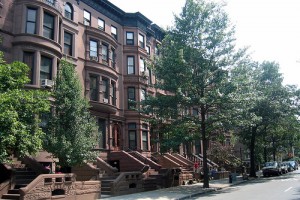 So, I’d spend the day with my Brooklyn buddy, Cheryl Levenbrown, walking to the bars and the bistros on 5th Avenue, The Gate, The Blue Ribbon, the High Dive, marveling at how many people have dogs and/or strollers. Dogs get in everywhere here, particularly The Gate, which is Cheryl’s watering hole, the place where she knows (and hugs) every bartender and half the patrons, where there’s a picture of her old dog, Gus, on the wall, and a treat jar with his name on the bar. He’s gone now, old Gus, but the place is full of assorted pooches, mutts and purebreds, hanging out, getting treats from Gus’ jar. Also, they serve a fine assortment of ales. Not to the dogs, though. Because that would be wrong. 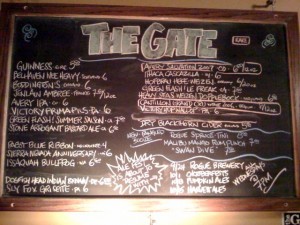 We’d take the subway into Manhattan. We’d go to shows at Radio City Music Hall, or in neighborhood clubs. She’d stay up until 4 a.m. and I’d go home early, to the Traipsemobile, parked at the corner of 6th Ave. and 2nd street, my Brooklyn home. Too bad about all the tourists, though. They’re really screwing it up for those of who live here.

Which is why I’m moving to Cape Cod.