Sept. 13 – Framingham, Mass. – It’s already weird here. The Traipsemobile gets stared at wherever it goes, but here the stares last a little longer and seem a little more judgmental, less, “Hey, what is that thing?” and more, “Why are you here?” I think it may be the Texas license plates. They probably suspect it’s some sort of mobile lethal injection unit, a Rick Perry spymobile surveying enemy territory in advance of the secession and inevitable war. Then again, I may be reading too much into this. Forget I mentioned it.

None of it matters anyway, because Week 1 of the Traipsathon has been a spectacular success and not just because I have found my way to a place where the high is 72 degrees and it gets down into the 50’s at night. I can sleep in the Command Unit without fans or air conditioning. This is a wonderful thing.

So, as of last night, I live in Massachusetts, in the driveway of Big Ed Miksis, college roommate and friend-for-life, who in spite of being surrounded by a wife, 3 kids and a 92-year-old mother in failing health, has decided that there’s no downside to having me around. He will surely come to regret this, but by then I’ll have moved on.

All the roads here seem to be narrow, overwhelmed by hardwood forests and full of curves. There are lots of “blind drive” signs and also warnings that areas are “thickly settled,” whatever the hell that means. It probably means, “don’t be fooled by the trees, there are lots of people here. And if you hit them, they will judge you., but not execute you, because this isn’t Texas you redneck Barbarian bastard!” 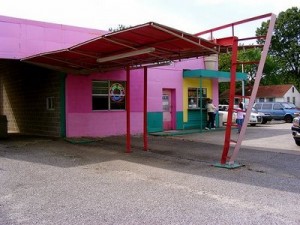 Hard to believe I only left Texas 5 days ago. Left my momma’s house in Carthage on Wednesday morning and was in Memphis that night, staying with old Tucson friend Mary Powers and her family (husband, two kids) and ending up at the legendary Jerry’s Sno-Cones, where they filmed parts of “Great Balls of Fire” and just a couple of blocks from where Johnny Cash used to live. What they’re famous for, other than fried pickles and gigantic muffulettas (as featured on the Food Network’s “Diners, Drive-Ins and Dumps,” or whatever it’s called) is outrageously flavored sno-cones with ice cream on top. I know! So I had the “Balls of Fire” special, which is a cinnamon sno-cone with vanilla ice cream. It’s like eating frozen Red Hots. My tongue was simultaneously frozen and burning up, a sensation which I highly recommend, especially if you’re already a little bit drunk, which I may have been. 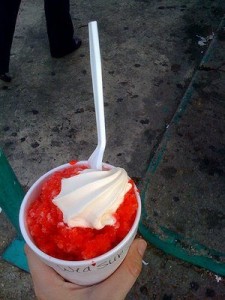 I moved to Knoxville for a couple of days, residing with legendary editor-writer-academician Chris Wohlwend, a man who owns two barber chairs and no hair. He’s got some time of part-time teaching scam going at the University of Tennessee which allows him an office and a parking spot across from Neyland Stadium, in what is allegedly a permit-only lot. The Mobile Command Center, of course, was waved in as if it belonged there. This is a tendency I plan to exploit.

Also teaching at UT it turns out, is legendary jazz pianist Donald Brown, who recorded with everyone from Art Blakey’s Jazz Messengers to Freddie Hubbard to – and this is where he started – Al Green. He is hard-core great and plays all over Knoxville, including Friday nights at a sushi joint called Purada, with a monster quartet of players, most of whom were his students at UT, where he runs the jazz program. 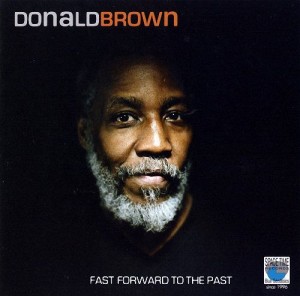 So this is how we end up at this horrible disco-bunker of a place on a Friday, sitting 3 feet from a world-class jazz musician, eating yellowtail carpaccio and having the time of our lives. Seriously. He played amazing elaborate jazz arrangements, some old Freddie Hubbard fusion numbers and ended up with stone-cold Memphis funk, all nasty and greasy and, let me say this clearly – FOR NO COVER CHARGE! Stunning.

It was the strangest and therefore best night of the Traipsathon so far. Sitting in this mirror-balled cinder-block hellhouse of a suburban bar (“New! Cherry-infused shots, only #5!”) surrounded by happy-hour refugees and early-arriving club kids, who are smoking their clove cigarettes and waiting for the dj’s to start, and this guy is KILLING IT. And his band is like an after-school all-star special, lead singer in a wheelchair, skinny white kids, dreadlocked drummer, sit-ins from players who are clearly in their 80’s but still bringing it. And then up comes this guy, Don Aliquo who’s a music teacher at Middle Tennessee State University and looks the part, ban-lon shirt, no-wrinkle jeans, glasses, short hair sit Except he wails on his soprano saxophone like a heroin addict. Jaw-droppingly good. I’ve never been happier. And, from the looks of it, Donald Brown felt the same. When he’s playing he get this look on his face of undiluted joy, like a baby being tickled.

So, seriously, if you’re passing through Knoxville, see where Donald Brown is playing. Go there. Try the sushi, Avoid the cherry-infused shots. Thank me later.

@DonaldJTrumpJr GREAT IDEA!! Speaking for the Left, I endorse this plan. Have Joni Ernst do it immediately!!. But… https://t.co/7FqOaUzn4t
- Sunday Aug 1 - 6:22pm

@SusanElizabeth I went to Newport last week and bunch of indoor shows after that BUT New England is highly vaccinat… https://t.co/okLnvN3bA6
- Saturday Jul 31 - 4:03pm