I spent most of the next day driving in the rain, the last gasps of the same tropical storm that had been chasing me since Texas. I finally outran it in Virginia, somewhere in Shenandoah County, just in time to watch the remaining clouds cast long shadows over the Blue Ridge Mountains. I had a cigar. Johnny Cash was singing “Ain’t No Grave” on the stereo. It don’t get no better than that. 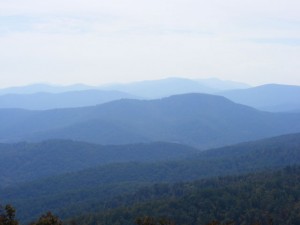 Now that I’ve been on the road for a couple of weeks, I think I’m starting to get the hang of this thing. The trick is to have strategically-located friends who will let me mooch off of them for brief periods of time and then – this is key – I leave before they get sick of me. So I drive from Knoxville to Bethesda, Md. – get fed green chile casserole by Tucson pals Darr Beiser and Margo Warren. I sleep in their basement. I use their towels. I leave. It’s quite a scam, really.

From there, I head north to Big Ed Miksis and his Massachusetts driveway, which has been my primary residence for the last week and a half, the New England headquarters of Traipsathon Solutions, Inc.

I’ve got a routine here. Every morning I unplug the van and head into Framingham, where I’ve made the wi-fi enabled Panache coffee shop my branch office. I eat soufflés and scones and muffins (not all on the same day) and generally act as if I own the place. Then I go the nearest Anytime Fitness gym, in Medway, ride the exercise bike , use the shower and generally act as if I own that place, too. Then I go back to Ed’s driveway, caffeinated, perspirated, cleansed and refresh, watch a little tv with him and his kids, drink a beer and retire to my luxurious mobile home. This is not a terrible life.

There are rough spots, of course. Yesterday, coming out of the gym, I noticed a police car positioned behind the Traipsemobile. Probably just another admirer, I thought, an off-duty cop wanting a look-see. Of course, I’ll oblige. I always give tours and sign autographs because without you, the fans, none of this would be possible. That’s not really true. I did this all by myself, but pretending that I care about you makes me seem like a bigger person. So I do it.

But, it turns out Officer Friendly was not just there to express his envy and admiration for all I’ve accomplished.

“Sir, is this your vehicle”

“No, sir. I need to see your license and registration.”

Oh. I asked him if the alarm had gone off, if I’d parked incorrectly (and let me assure you, I had NOT)

This took me a while, since my top-secret filing system is based on the principle that if I don’t know where anything is, then no one else will know, either. It took a while to find the registration, which was under the owner’s manual for the toilet, next to the tv antenna).

They called me in, they checked me out and finally reached the conclusion that I was indeed who I claimed to be (No, not Eric Clapton after a donut binge. I only use that line in bars.) The problem is that the T-TRAIPS license plate, having no official-looking stickers, struck the officers as possibly phony thus making me a likely suspect for – are you ready – a bank robbery a couple of towns over. That’s right I was a bank robbery suspect. Just like Ben Affleck in the “The Town.”  I’ve never been more proud.

They let me go, of course. Mostly because they were not prepared to handle the flood of paparazzi and autograph seekers who surely would have mobbed their little jail had I been taken into custody. And, also, because they were busy looking for the real bank robbers.

“So, you guys want a tour or anything. It’s got a shower.”

“No, sir. Sorry to have disturbed you. Have a nice day.”

I bid them farewell. I understood. We have jobs to do. We serve the public. We are always on duty. So they went back to chasing criminals and I went back to living in other people’s driveways, watching tv and drinking beer.

Have a nice day. 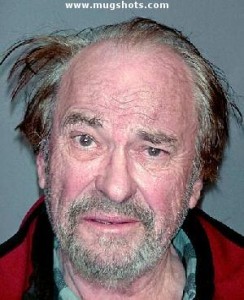