Norman, Jack and me

Home/Dispatches/Norman, Jack and me
Previous Next

Norman, Jack and me

So where were we? Oh yeah, Falmouth. (pronounced phall-muth, not foul mouth, in spite of my insisting otherwise). 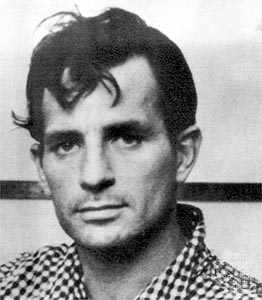 I drove by Jack Kerouac’s grave last week. Didn’t stop. Kept moving. It seemed like the right thing to do. Although, in retrospect, maybe I should have at least had some apple pie.

I’ve been spending a lot of time with dead authors lately. In Concord a couple of weeks ago, after walking across the bridge and shouting “Redcoats! Fucking Redcoats!” as loud as I could, (this is a lie) I went to the Sleepy Hollow Cemetery, where there’s an “author’s ridge” with a mind-blowing lineup of dead writers: Nathaniel Hawthorne, Louisa May Alcott, Ralph Waldo Emerson and Henry David Thoreau, along with some rich-ass German industrialist whose gravestone was bigger than anyone’s. Apparently he was just passing through town, keeled over and got the biggest stone in the place.

Most of the author’s headstones are fairly simple, except for Emerson’s, which has a big bronze plaque on a jagged chunk of granite, the kind of thing you’d expect from a prominent local family. 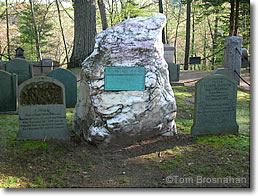 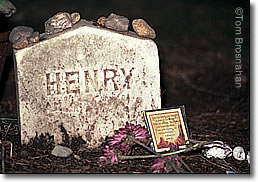 Thoreau’s is my favorite, though. Just a little stone that says “Henry.” Nicely done. 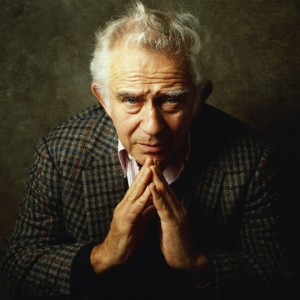 I was thinking about Mailer because of a documentary I saw a couple of weeks ago at the Boston Film Festival: “Norman Mailer: The American.” The director Joseph Mantegna (no, not that one, a different one) did some interviews with Mailer before he died and also had some jaw-dropping conversations with many of his assorted ex-wives, including the one he stabbed back in 1960, the first time she’s talked about it on camera. He was apparently drunk and/or high, spectacularly so, and before he stabbed her, he’d been punching assorted people in the face on the street below. He did a lot of punching, Mailer did, with his fists and his writing.

It was the theme of the film – which is looking for a distributor and should hit the art house circuit sometime next year – Mailer’s aggression, his need to be the toughest sonofabitch in the writing game, which meant not just writing tough but being tough, boxing, drinking, fucking his way through six marriages, countless affairs and, it would appear, at least a couple of genders. He had issues, Mailer did.

One of the most famous incidents, caught during a film he’d commissioned called “Maidstone” in 1968, involved Rip Torn, crazy-eyed and whacked out of his mind, braining Mailer with a ballpeen hammer and Mailer eventually biting off a piece of his ear. It may have started out as “acting” but the moment Torn swung a real hammer instead of a rubber one, it got real. Which, in retrospect, Mailer probably appreciated. Not when he was bleeding from the scalp, though, with his screaming children watching the whole thing. 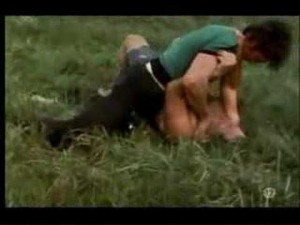 If you haven’t seen the footage (I sure hadn’t) it’s here. I was riveted.

Kerouac didn’t have Mailer’s need for self-aggrandizement but he had just as much ego, just as much certainty that he needed to be a great American writer for his life to have meaning. He probably could have kicked Mailer’s ass, but I don’t think he’d have seen the point.

They had a Lowell Remembers Kerouac Festival last weekend in Lowell, Mass, his hometown, which is why I spent the day there, walking around the mill-town neighborhoods where he grew up, places he wrote about. They’ve done their best to pretty up Lowell, converting the textile mills into condos, putting in lots of parks and coffee shops and finally embracing Kerouac, who they seemed to shun when he was alive, being a drunk and a weirdo who hung out with all those commies and fags and Jews and beatniks and such. They never understood Ginsberg or Burroughs in Lowell. And they didn’t really understand Jack.

But now there’s a Commemorative in town, an effort to acknowledge him. There’s even a coffee shop/tavern called Dharma Buns,  There was a reading there as part of the festival, local authors doing passages from Kerouac’s work as well as their own, while the waitress walked through the crowd yelling “Turkey burger? Who had the turkey burger?”

At least 150 people filled a theater to hear former Grateful Dead publicist Dennis McNally – who did his history thesis on Kerouac  at the University of Massachusetts – talk about Kerouac and Bohemianism in America, and he made a pretty good case that without Kerouac there would have been no New Journalism or Hunter S. Thompson or Bob Dylan or Grateful Dead. It was “On the Road” that motivated Janis Joplin to finally get out of Texas. And there’s a line that goes from Thoreau to Twain to Kerouac and, yes, to Mailer; iconoclasts looking to make a mark on the culture but, more than that, to find other people who, like them, didn’t feel like they fit in.

And they never did, no matter how successful they were. Which is why the success of “On The Road” isolated him as much as anonymity had, maybe more. Kerouac couldn’t handle the burden of being a prophet. So he became a drunk instead. 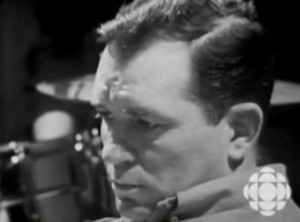 But without him, I wouldn’t be out here, either, doing whatever it is I’m doing. I don’t have his aspiration – the notion of seeing and somehow capturing the real America. But I understand his restlessness, his inability to stay in the lane to which he’d been assigned. So I get rid of pretty much everything I own and climb into this van and drive just to drive. I’m not looking for anything profound. Which probably increases my chances of finding it.

So I thought it was the least I could do to spend a day in Jack’s hometown, to listen to some of his stories, meet some of the people who love him and study him, to see some the run-down streets and the “Welcome to Spaghettiville” sign on the railroad pass over the street that leads to his grave, where I drove by, but did not stop. Sunset was coming and I needed to get back on the road.