Malcolm and Ann, Justin and Buddy

Home/Dispatches/Malcolm and Ann, Justin and Buddy
Previous Next

Malcolm and Ann, Justin and Buddy

So where were we? Oh yeah, in Austin, drinking wine with Shirley MacLaine.

Shirley finished filming and went back to Santa Fe, where she has better access to messages from other galaxies. I hung around Austin to see a few more days of the “Bernie”  shoot (including a Jack Black musical number) and to interview the director, Richard Linklater.  Also, I ate a lot of tacos. This, other than seeing live music, is the most important thing to do in Austin. I was at Torchy’s Taco’s at least three nights a week, usually having a Mr. Pink, which is an Ahi tuna taco with cabbage and hot sauce and, I am quite certain, a fair amount of methamphetamine. Have two.

Speaking of food and music, I headed from Austin (with a Thanksgiving side trip to Dallas) to Baton Rouge and New Orleans. I stayed, as I always do, with Malcolm and Ann Robinson, who not only let me invade their home, but, on their worst nights, serve better food than any restaurant north of New Orleans. There is always gumbo on the stove. And corn bread. And crawfish or shrimp. The first night I was there, Malcolm – who I’ve known since junior high – grilled poblano peppers and stuffed them with boudin. This is his version of making do, the equivalent of me having Doritos for dinner. 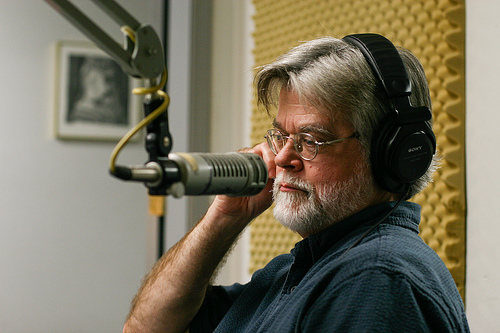 Although we grew up together in Shreveport, Malcolm has become the guy who everyone goes to for everything in Baton Rouge. He used to run a book store, then a compact disc store and, before they ruthlessly cut him loose last spring, a local NPR affiliate. He can’t go anywhere in town without having to say hello to 20 people. If he weren’t so self-effacing and devoid of avarice, he’d be Nucky Thompson in “Boardwalk Empire.” As it is, he’s just the guy everybody calls when they need to get something done.

This included Dan Baum, a former writer at The New Yorker, who stayed at Malcolm’s house when he was writing about the aftermath of Katrina and, not surprisingly, ended up writing about Malcolm and Ann as well. Here’s the story. “Doughnut pie.” 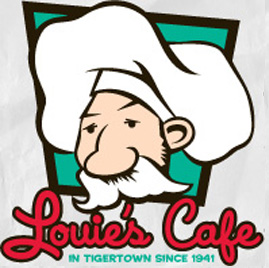 Staying at Malcolm’s also means at least one trip to eat breakfast  at Louie’s, the coolest joint in Baton Rouge,, where a guy named Frenchy is manning the grill and the crawfish omelette will blow your mind. It means drinking a lot of beer (and an occasional sazerac) and listening to a lot of music.

We were somewhere wonderful every night of the week. We saw Justin Townes Earle at the Manship Theater in Baton Rouge on Wednesday, our high school pal and should-be-famous songwriter David Egan in Lafayette on Thursday, Washboard Chaz and Beth Patterson on New Orleans on Friday and Shreveport blues guitarist Buddy Flett on Saturday night at a semi-private listening room in Baton Rouge. Not a clunker in the bunch. 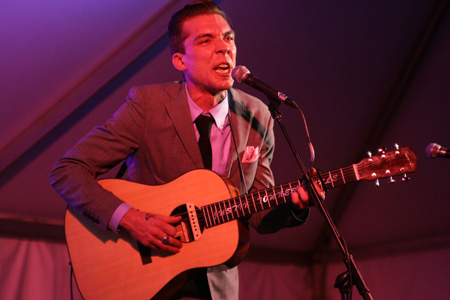 If you haven’t seen Justin Townes Earle, you need to seek him out. Sure, he’s Steve Earle’s son, named after Townes Van Zandt, blah, blah. But this is not about name recognition. I can’t remember the last time I was so mesmerized by a performer, not just by the songs, which are terrific and poignant, but by the haunted look in his eyes, the tangled-string marionette stumble to his walk, the way he jams his leg to the floor so hard that it knocks him off-balance, as if the force of it was a surprise even to him. He likes wearing bowties and custom-cut jackets and when he starts herky-jerking around, he looks like Howdy Doody on crack. Sometimes it’s funny and sometimes it’s sad and sometimes you wonder if it’s all just kind of an act. But I don’t think so.

He was an addict by the time he was 12, his daddy nowhere in the picture, off dealings with problems of his own. He spent a lot of years homeless, kicking around Nashville, New York and New Orleans, lean and haunted and pretty close to dying a whole bunch of times. All of that’s in the music. And all of that’s on his face, which is lean and intense. Sometimes he looks like a baby (He’s 28 years old). And sometimes he looks like an old, old man.

He’s been in rehab a dozen times, the last time just a few months ago, after he got drunk in Indianapolis and, apparently, went off on a promoter. In 5 years, he’s either gonna be a huge, huge star or he’s gonna be dead. I could see it going either way. 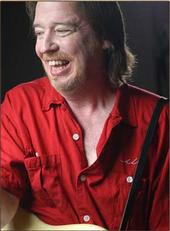 And then there’s Buddy Flett, just as damaged and just as fragile, but in a completely different way.

He’s part of a long Shreveport tradition of guitar wizards – Leadbelly, for instance,  James Burton (creator of the Suzy Q lick, sideman to Elvis and Ricky Nelson) and, lately, Kenny Wayne Shepherd, who counts Buddy as his mentor and one of his guitar heroes. And rightly so.

Buddy, with his brother Bruce and my high school pal David Egan, was central to what should have been the greatest band Shreveport ever produced – A-Train. If you were around Texas, Louisiana or Mississippi in the early 80’s, there’s a good chance you saw them tear down a joint somewhere – Dallas, Jackson, New Orleans. They were the  blues-soul band everyone looked up to. But the record deals never came together, the in-band politics got ugly and the whole thing, perhaps inevitably, fell apart. But there was no doubt that Buddy was the real deal. The old blues guys – BB King, Hubert Sumlin – gave him their blessings and the young ones – Kenny Wayne included – worshipped at his feet. 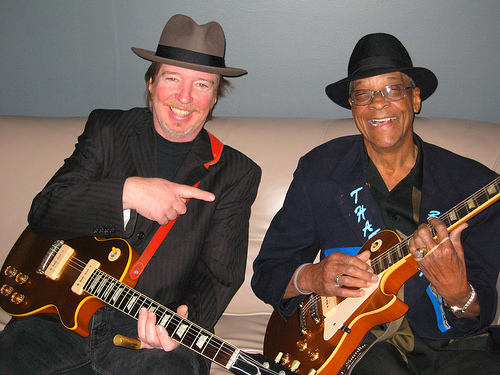 He was eking things out for most of the last 20 years, playing with his brother in a band called The Bluebirds, doing some solo gigs. He just wasn’t enough of a hustler to make it big. He cared about the playing, but not so much about the business. He made a living, but not much more.

In 2008, he played on one of those Caribbean Blues Cruises that have become all the rage – a way for people to see everyone from Johnny Winter to Jimmie Vaughan while floating from port to Caribbean port. When Buddy got back to Shreveport, he collapsed, went into a coma and almost died. Turns out it was encephalitis, probably from a mosquito bite, and he was in and out of consciousness for weeks. When he woke up, a huge chunk of his brain was out of order. He couldn’t remember names. He couldn’t read or write. And, worst or all, he couldn’t play guitar.

Therapists – and his friends – have spent the last two years re-teaching him everything, how to dress himself, how to find his way home and, miraculously, how to play guitar. They’d play him a song, which he’d love and say, “Man, that’s great. Who is that?”

He’s back to touring again, playing low-key solo gigs within driving distance of Shreveport. He’s a sweet, innocent presence now – not that he was a dick before. His playing is intricate and powerful, even more so than before. And every once in a while he breaks out in a smile as if some invisible presence has just told him a joke. Or maybe another light has just gone on. It’s a wonderful thing to see.

He still gets lost in songs, forgets, lyrics and chords and where he is. But he rides through it, not self-conscious in the least. It’s as if he’s had the chance to go through childhood a second time, to be amazed by things he once took for granted. He knows what it’s like to lose yourself. That’s a fine thing for a guitar player to know.

I saw him again a few days ago at a blues brunch in Lafayette. David Egan was there at the table with me, as were Malcolm and Ann. We ate crabcakes Benedict and crawfish etoufee, drank good Cajun coffee and cheered for Buddy Flett. Maybe I’ve had some better days, but I can’t think of any right now. 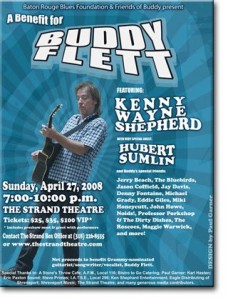 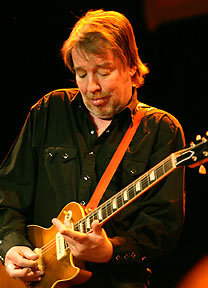