So where were we? Oh, yeah, driving from El Paso into New Mexico, across Arizona and into California.

I was headed back to Los Angeles, where I’ve lived for most of the last 20 years. I’d only been gone since last March, but it seemed way longer than that. I’d forgotten how much I love driving across the desert, climbing over the Coachella pass, past the wind farms outside of Palm Springs and re-acclimating to the hurtling, no-room-for-error freeway driving. It takes a while to get used to going 60 miles-an-hour in bumper-to-bumper traffic. But it comes back quickly, like riding a bicycle. Off a cliff. 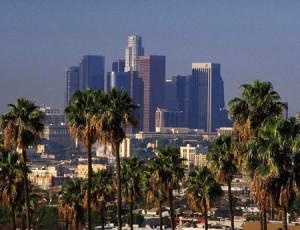 Whoever and whatever you are, you can find someone out here who looks and thinks and acts like you. Hippies, anarchists, Evangelicals, Orthodox Jews, cross-dressing Civil War re-enactors. It doesn’t matter. They’re all here. And more or less getting along. Or at least staying out of each other’s way.

So, okay, it’s too expensive and too crowded and the infrastructure if falling apart in front of our very eyes. Just as it is in Arizona and Ohio and Massachusetts. Things aren’t really worse here, they’re just harder to ignore. Because everybody who lives here is writing a screenplay or pitching a reality show or trying to get noticed by someone who can make them famous. Things get magnified. 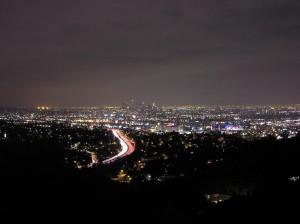 I spent most of my time on the non-hip side of town, in Atwater Village and Echo Park and Eagle Rock. The last two became hip, but weren’t when I first lived there. Whenever I noticed too many 20-somethings in porkpie hats, I knew it was time to change neighborhoods.

If I had a claim to fame in my L.A. years, it was that I may have been the only professional writer in Los Angeles who didn’t secretly want to write a screenplay. I never had an interest in it, or the talent to do it well. This was a huge advantage, journalistically speaking, because I wasn’t concerned about running in the “right” crowd or meeting the right people. I just did my little stories, went home and watched tv. I wasn’t frustrated because my artistic dreams were being crushed. I wasn’t threatened by other people who were smarter, funnier and better connected. Which was, to be honest, pretty much everyone I knew.

But – and this is my favorite L.A. thing of all – most of the people who were smarter and funnier and better connected, looked pretty much like me – bearded, paunchy guys with their shirttails hanging out. And, because someone who looked like me could easily be a director or the creator of a hit sitcom, no one could afford to dismiss me just because I looked like a slob. In New York, you have to wear a suit to be taken seriously. Here, you can’t afford to judge people based on the way they dress. Except maybe in Beverly Hills. But I almost never went there. One time when I did, Richard Simmons licked me on the neck. I am not making this up. 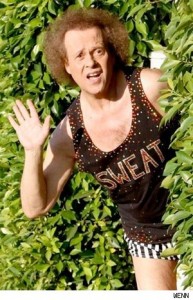 So, needless to say, I have avoided Beverly Hills on this return visit. I spent some time in the Valley, some time in West L.A. and the last week or so in Pasadena, hanging out with my friend Roberta Cruger, whose house (and more importantly for the Traipsemobile – her driveway) is just a half-block away Orange Grove Boulevard and the float staging area of the Tournament of Roses Parade.

And that’s where we spent New Year’s Eve, walking amongst the floats as midnight approached, a meandering mass of celebrants in stupid hats, drunk kids on skateboards, couples making out and six blocks worth of flowered-covered floats,  available for close-up inspection. The whole area is lit from above, powerful floodlights on 100-foot masts, which gives the scene a spooky, other-worldly feel. The bright lights and dark shadows make some floats seem like apparitions. It’s cool, but it’s also kind of creepy. No one in our group was particularly drunk. But I can imagine someone being chemically altered in a New Year’s Eve kind of way, walking out into those floats and getting seriously freaked out. As Exhibit A I offer the Scary Clown Car float. Sleep tight, kids. 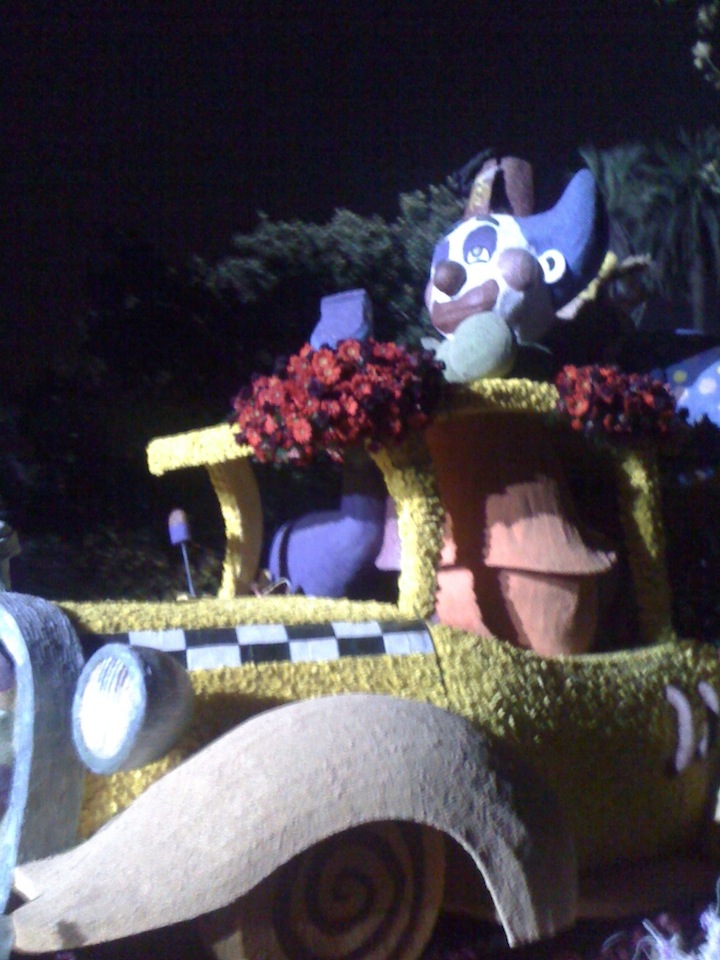 Some floats were scarier in the morning, when we stumbled back – after barely 3 hours of sleep – onto Orange Grove for the actual parade. For instance: The Alzheimer’s Boomer Express, brought to you by the fine folks at Pfizer, who want to remind you that it’s only matter of time before you don’t recognize any of your friends or family. Happy New Year! 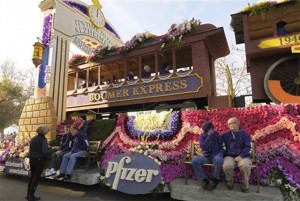 People paid hundreds of dollars for grandstand tickets and spent 18 miserable 40-degree hours waiting on sidewalks to ensure a viewing spot. We did neither of these things. You shouldn’t either.

Show up around 7, an hour before the parade officially begins, at the corner of Orange Grove and Delmar, where the floats and the bands are lined up ready to, and you’ll find plenty of vantage points, sometimes in front of those very same overpriced grandstands. You can buy food from vendors. You can walk up to the floats right up to the moment they start moving and really appreciate the detail that goes into them, not to mention the hidden messages often spelled out in caraway seed such as “The Shriners are holding me hostage.. They’ve planted a bomb in my fez.”

There was a band from Japan that did Michael Jackson’s “Smooth Criminal” choreography. There was a float with dogs jumping after Frisbees and landing in a pool. There were clowns and cheerleaders and gigantic horses taking gigantic horse dumps. There was Bucky Badger, the Wisconsin mascot, doing headstands dangerously close to the areas where there had just been gigantic horse dumps. And the TCU Super Frog mascot on a skateboard. All this before 9 a.m. There were drawings of Ronald and Nancy Reagan made from lentils. Which was way scarier than the Scary Clown Car. 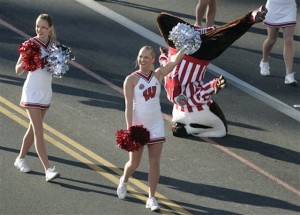 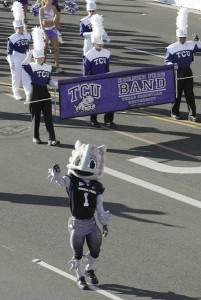 We walked the half-block back to Roberta’s house, watched the parade again on tv, ate black-eyed peas and collard greens for good luck, and then went to the Rose Bowl game, where we watched from the end zone as TCU beat Wisconsin 21-19 and many people from Texas wearing purple clothing danced and made fools of themselves. I wore a purple beret and joined them. Cause when I see a bandwagon,, I jump on. Go Frogs. 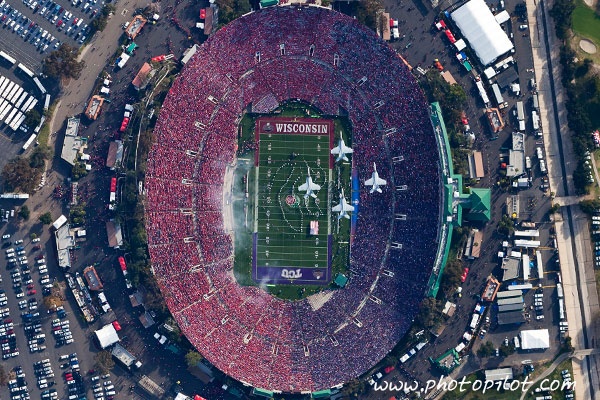 Now I’m exhausted – too many consecutive days of staying out until 2 a.m. and then starting the new day at 4. But at least I can say that the Traipsemobile’s been to the Rose Parade. Next year, we expect to be in it.

@unclebarkycom To summarize: Biden authorized shootdown Wednesday & waited until there was no danger to civilians o… https://t.co/TZuwRB6VNE
- Saturday Feb 4 - 11:33pm