So where were we? Oh, yeah, Fort Worth, introducing my mother to Shirley MacLaine.

Texas was already warming up past my tolerance levels, a couple of days in the 90’s, a couple of nights where it barely got below 80. It was time to move north and west. I’d decided to head for New Mexico, to Santa Fe and Taos, where even if the days get too warm, the nights are comfortable and cool.

But I had a couple of things to do before I could leave. First,  I had to repair the Traipsemobile’s Satellite Dish, dinged last December when I foolishly attempted to enter a shopping mall parking garage in West L.A. . The sign, I swear, said the clearance was 11-6, two feet more than the Traipsemobile requires. I should have known they were lying. Parking garages NEVER have that much clearance. But, because I want to have complete faith in corporate America, particularly the construction industry, I took their word for it and went merrily ahead.

It could have been worse. I could have gotten stuck there , wedged beneath an overhead concrete beam, while an ever-growing line of honking douchebags piled up behind me. Fortunately, there was a tall-enough exit, so I could escape. But not before encountering a hanging wooden placard with the true clearance: 9 feet. I went as slowly as I could, but I heard the scraping and then the thumping as that swinging sign bonked everything on the roof. The satellite dish, 15 inches higher than any of my other gadgets and in the front of the vehicle, got the worst of it. There was a large dent in the front, as if it had been beaned with bowling ball.

I worried less about the effect on the dish – my satellite reception had been funky even before this – than on the Traipsemobile’s aura of invincibility. Make no mistake, it is the dish, that black dome on top, that gives people pause, that makes them wonder whether I’m a storm chaser or a storm trooper, a high-tech surveillance vehicle or the Google street-view guy. The gun-metal paint job of the vehicle itself is part of the mystique , but the dome is what makes it work. Would the production designers for “Spy Kids 4” have copied the Traipsemobile for their supervillain vehicle if it didn’t have that dome? Not a chance.

And now it was scarred, disfigured, clearly not made of impenetrable top-secret materials. From a certain angle, it looked like a giant caved-in toilet plunger.

But my satellite guy was in Texas, and I was also afraid of what repairs might cost, so I put off getting it repaired for as long as I could. Finally, I met up with my guy at a RV shop in Mesquite. He gave it a couple of whacks with a mallet, re-set the DirecTV receiver and told me I was good to go. All he wanted was gas money. I gave him $40. Aura of invincibility restored.

Which gave me confidence for the other important mission:  A full-course formal dinner in the Traipsemobile. 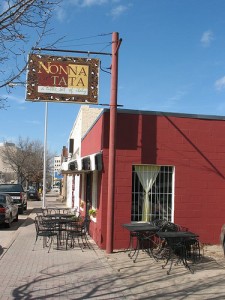 I’m not sure who suggested this first. It might have been Bud Kennedy, columnist extraordinaire for the Fort Worth Star-Telegram, one of the last full-time newspaper employees in America. Or Shelly Seymour, who was my friend  even before she married Bud. Or possibly my Dallas friend Cyrena Nolan, who is cool for a number of reasons, not the least being that she owns an actual lighthouse on Lake Ontario. She plans to put in a guest room. And a bar. Once I’ve  had the Traipsemobile fitted with pontoons, I’m heading that way.

We were all having dinner in Fort Worth one night when one of them mentioned Nonna Tata, this allegedly-spectacular Italian restaurant just south of downtown on West Magnolia Avenue. What caught my attention wasn’t the awards they’d won or the great reviews (like this one).

No, it was when Bud mentioned that Nonna Tata is so popular and has so few tables (a half dozen inside, a half dozen outside) that they accommodate their overflow customers – which they always have – by serving them anywhere on the block. You can go into “The Usual” (one of the greatest bar names ever), a cocktail lounge just up the street, order anything you want from the Nonna Tata menu and their waiters will bring it to you, complete with china and silverware.

If you want to set up a folding table on the sidewalk – and people have done this – they will serve you. Does this mean, I asked Bud, that if we pull up in the Traipsemobile, with tables set up inside, then . .

“Yes, they will serve you.”

This, I believe, is why the Rapture is coming this weekend. Because, having arranged for a formal dinner for four to be served in the Traipsemobile, Jesus has done all he can do. Bring on the apocalypse, goddammit. Because I have been served grilled calamari and freshly-made spinach gnocchi in the comfort of my own mobile home! There is nothing available in heaven that I haven’t already seen here. 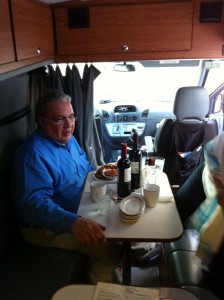 I’d converted the seating arrangement inside the Traipsemobile for maximum utility. The bed had been folded into couch position, the two collapsible tables set up in the aisle. We had candles. We had wine. We had tequila. We had a somewhat bemused and very patient waitress bringing us bruschetta and menus.

We ordered things I cannot remember – trout cooked in parchment, different kinds of lasagna, chicken, tortellini. And they kept bringing us things we hadn’t ordered, apparently just to see how much food we (and the van) could hold. By the time it was over, the four of us had bits and pieces of at least six different entrees and too many appetizers to count. It was glorious. 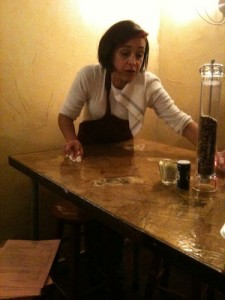 The owner and chef, Donatella Trotti, came out at one point just to see what was going on. She’s a fascinating story, a woman who came to Texas from northern Italy when she was working with Versace. But she didn’t really want to be in the fashion business, she wanted to be a chef, to cook the deceptively simple northern Italian country dishes she’d grown up with in her own little restaurant. And, five years ago, that’s what she did. The raves were instantaneous and have continued ever since.

We had the back door open, a breeze blowing through, the Magnolia Avenue street lights behind us, passers-by staring, stopping and, more than once, saying, “Are you kidding me? They’re serving you in there? This is the greatest thing I’ve ever seen.” 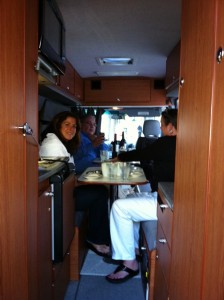 View from the rear. Shelly on left, Cyrena on right

We were the last ones to leave, in the sense that when I emerged from the van I realized that Nonna Tata’s outside chairs had been put away and the patio lights were off. The waitresses – I think everybody in the restaurant waited on us at some point – cleared the many plates, reclaimed their giant pepper mill and hauled it all away. Cyrena paid the bill  before any of us realized what had happened. Maybe she will also pay for the pontoons.

So now I know that at least six people (we had visitors throughout the evening) can sit comfortably in the Traipsemobile, drink wine, eat spectacular food and laugh for hours. And if they ever decide that they don’t like the view, I’ll just start up the van and move on. 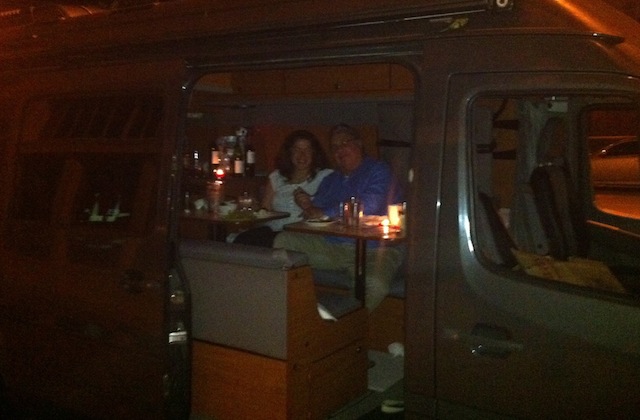 Bud and Shelly, viewed from the sidewalk

The best way to protect Fourth of July parade-goers is to have only one door in and out.
- Monday Jul 4 - 8:00pm

@ChrisWillman @Variety This is just wonderful. And made me think McCartney should do "Kansas City" again. The crowd would go crazy.
- Monday Jul 4 - 6:07pm