Rider On The Storm

Home/Dispatches/Rider On The Storm
Previous Next

Rider On The Storm

So, where we? Oh yeah, Shreveport.

I’d forgotten how volatile springtime can be in the South,  particularly March and April. All that “in like a lion, out like a lamb” stuff doesn’t apply down here.  It’s more like, “in like a head cold, out like the end of the world.” Tornado season comes early here. As much shit as people used to give me about living in an earthquake zone in California, springtime in Texas feels like a much riskier place to be. You don’t know when an earthquake is coming, sure, but at least they don’t come every damned year, complete with sirens and angry-God skies. 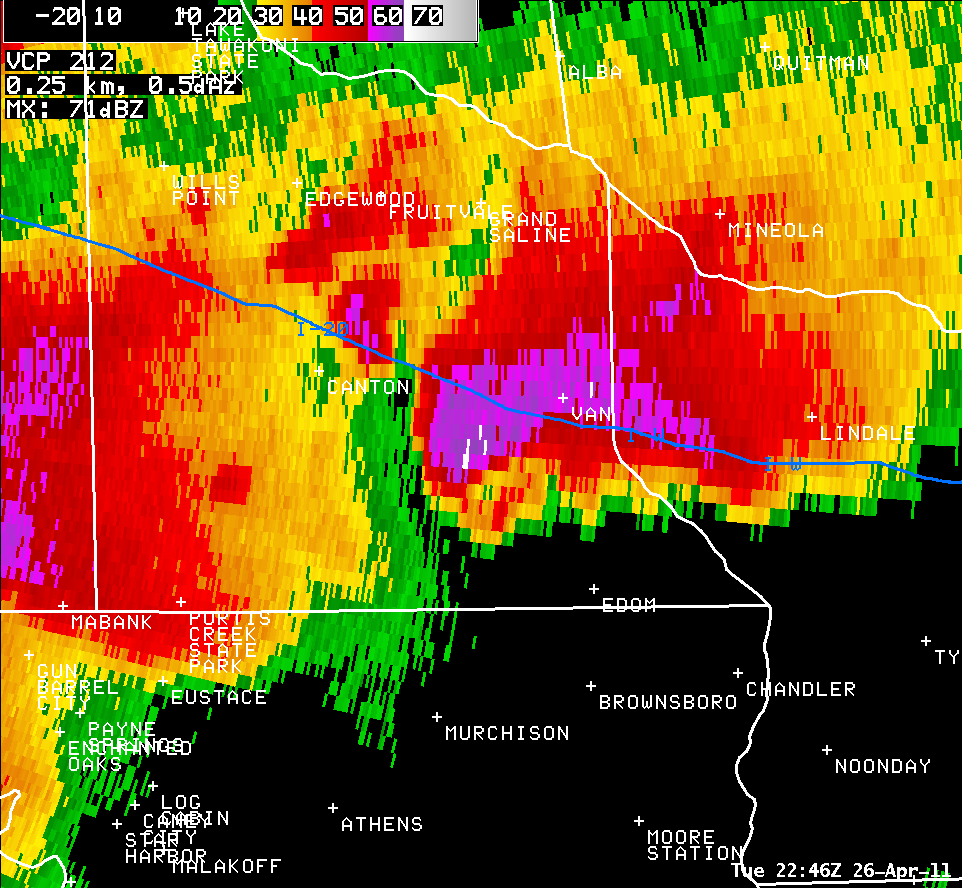 The fronts blow through every few days. Or at least it feels that way. It’s always warm and humid ahead of them, the kind of weather I hate most of all. It gets up to 85-90 degrees in the daytime and not much below 80 at night. This is not good for Traipsemobile sleeping because, even with the inverter working, I can’t run the air conditioner all night. So I turn on the fan, throw off the covers and hope I don’t drown in my own perspiration. Although that would be kind of hilarious and should probably be a cause of death on CSI:Miami.

“He was face down in a puddle of his own fluids, Lieutenant. I’d say the flop sweats were fatal.”

I’m kind of happy when I see some weather rolling in, except I forget that nothing’s going to knock the temperature from 85 degrees to 48 without some collateral damage. It’s not the tornadoes I worry about so much. It’s the hail. Which is why I put the Iphone on the weather station and try to guess whether I’m in the path of pea-sized, baseball-sized or Jimmy-Smits-head-sized hail. No one can survive that.

I’ve been in Dallas for most of the last few weeks and, usually, the storms blow north of here, up through Denton and Plano and into Oklahoma. But every once in a while, in spite of the Republican majority, they blow into the high-priced  Dallas neighborhoods where I particularly enjoy sleeping because I know how much it would piss off the residents if they knew I was there.

When the storm is headed your way, they tell you to get inside a sturdy shelter and stay away from windows. I do not have this option, not without knocking on the doors of strangers who would, rightly, wonder what the hell I’m doing in their driveway. The only windowless “room” in the Traipsemobile is the bathroom, but it’s not like there’s a tub to crawl into.

Instead, I start up the engine and try to figure out from which direction the storm – and therefore the hail – is likely to come. I find a big building with awnings and park alongside, parallel and, at least once, on the sidewalk. This, I figure, cuts down the angle and makes it less likely that Jimmy Smits head will come crashing through my windshield.

So far this has worked, mostly because I haven’t been hit with anything larger than Grape Nut-sized hail, which is harmless and has a surprisingly woodsy taste. Then I go back into the residential neighborhood from whence I came and go back to sleep. I’m like a Navy Seal, except that I have no actual survival skills, weapons or secret knowledge that I could kill you with a toothpick.

Speaking of which, wouldn’t it be weird to be the guy who shot Osama Bin Laden in the eye and not be able to tell anybody about it, ever? For the rest of your life, everywhere you go, whenever some smartass is popping off about anything, how would you be able to contain yourself and not go, “Realy, Jackwad? You’re giving me shit cause I’m in your seat? I killed Osama Bin Laden.” It’s like having a free pass for, well, everything, and not ever being able to use it. The guy who plays Jack In The Box must also feel this way.

Last week I was driving from Dallas to Carthage, to interview some family members about my murdered aunt and how she got to be such a pain in the ass that her manservant shot her and stuck her in a freezer. Sure enough, there was another line of tornado-spawning thunderstorms chasing me right down Interstate 20, the same swarm that would later kill all those people in Alabama. I could see the leading edge, the lightning, everything going all black and gray.

The radio was announcing that a tornado had been sighted near Exit 548, where I’d been 10 minutes earlier and was headed east at approximately 25 miles an hour. So what should  I do? Duck and cover? Or keep going. I was going considerably faster than 25 miles an hour, so I decided to outrun it. 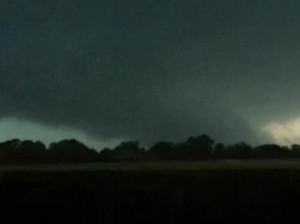 Which I did, for a good 40 or 50 miles. But when I got to Longview I knew I had to turn south for Carthage and would be on back roads, driving through the woods and unable to see much sky which was getting darker in a hurry and sirens were starting to go off. So I made the rational choice. I went looking for a bar.

I found Willy G’s in downtown Longview, a sturdy old brick building in the business district, as safe a port as any. No one in the place had been listening to the news, so I was the only one who knew that we were about a half-hour away from a big surprise. I suggested they turn on the Weather Channel. But they were watching baseball. I ordered chips and Shiner Bock and sat at the end of the bar furthest from the front door. And I waited.

The lights flickered off and on. The satellite went out and suddenly everyone was paying attention. There were horizontal rain sheets blowing down Tyler Street and some patron locked the front door to keep it from blowing open. Other patrons, not seeing this, attempted to leave and realized they were locked in. It was like a scene from a bad horror movie, just before the monsters come crashing through the ceiling I was considering the possibility that, if things went well, I wouldn’t have to pay my tab. 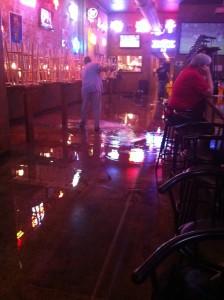 Willy G's, after the flood

There were no monsters and the tornado, apparently, went elsewhere. But there was so much rain that the drains backed up and slowly, very slowly,  three inches of water started spreading across Willy G’s floor. From the back to the front, like a scale-model Tsunami. Once again, I made the right choice, picking up my beer and moving to the front. My shoes barely got wet.

I kept drinking and they kept serving, even as the water got deeper and eventually covered the entire floor. Some poor bastard in fishing boots w tried to suck it up Shop-Vac it, then push it out the back door with a broom. This didn’t work, of course. But what’s important is that the kegs were never threatened. Unfortunately, the cash register was also unaffected. Tabs were paid.

I made it to Carthage later that night. The back roads were surprisingly unscathed, a few blown-down limbs here and there, but nothing more. I pulled into my mom’s driveway sometime after midnight and that’s where I slept, cool and comfortable, at least until the next storm..