So where were we? Oh yeah, in a cabin outside of Taos, not writing.

I’ve been wandering around northern New Mexico since then, drifting back and forth between Santa Fe and Taos, stumbling into little gems of restaurants (La Cueva Cafe in Taos) and old favorites (Cowgirl BBQ in Santa Fe), drinking my body weight (a fluctuating figure) in microbrewed IPA and subsisting almost entirely on foods covered in green chile. New Mexicans put green chile on pretty much everything. They put it in ice cream. I’m pretty sure that if you run for office in New Mexico you have to wear a green chile on your head at some point. Or, at the very least, in your pants. 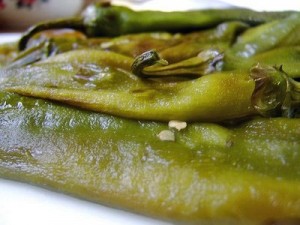 The last time I vistited Santa Fe for anything more than a drive-through was for a wedding and funeral in 1997. They were only a week apart and, for the record, the funeral was a lot more fun.

The wedding was a fiasco, the marriage that resulted predictably short-lived. The bride, an artist and set designer, was in love with all things Santa Fe, the mountains, the sunsets, the light in the sky. She wore turquoise jewelry and fringed leather jackets. She adored the George O’Keefe ladypart paintings. She got into Native American culture to the point that she decided to have a local shaman perform the wedding. My friend, the groom, had to stand on a mountain top outside of Santa Fe, a thunderstorm looming, wrapped in a blanket, having rattles shaken at his head, sage smoke swirled around his body and some womn with feathers in her hair chanting God-knows-what for what seemed like hours. I’m not even sure it was legal. Not that it mattered. The marriage didn’t last any longer than his other three. Clearly, weddings aren’t good for him.. But he can’t seem to stop. It’s like me and a bag of Oreos.

The funeral, on the other hand, was a joyous, wonderful thing. My friend Elizabeth McBride was also mesmerized by Santa Fe. And when she became a succssful Hollywood costume designer (She did the costumes for “Thelma and Louise” and got an Oscar nomination for “Driving Miss Daisy”), she moved there. She found a place in Tesuque, northwest of Santa Fe, out in the woods by a creek, where she could hike and ride horses and watch the sunsets perform magical acts. She had the life she wanted.

But she also had cancer. She thought she’d beaten it, but it came back and got her in 1997. She knew the end was coming and – I know this will sound weird – I think her final months were her best and possibly her happiest. She had an amazing circle of female friends who took care of her, nursed her, fed her, and made her laugh. I saw her a week before she died and I’d like to think she knew I was there, but I can’t say for sure. But I do know she seemed serene, in her big bed, the creek outside her window, her cat asleep next to her. She was ready to go. 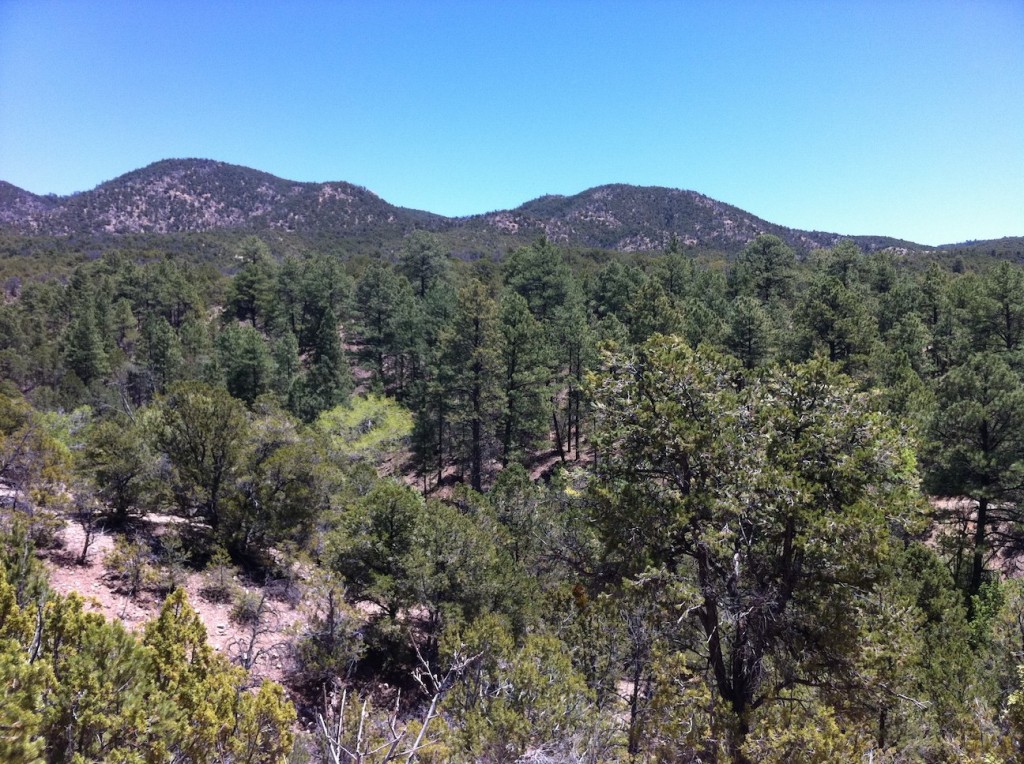 Her friends and family gathered in the hills above Tesuque a few days after she died and we hiked up her favorite canyon to a spot where she’d often go horseback riding. There was a rudimentary cross at the top of a ridge, a rough-hewn memorial that had been there for years and where she’d often paused. That’s where we scattered her ashes mixed with wildflower seeds,, the wind blowing bits of her all over us. Then we hiked back down to the house, drank beer, told stories and laughed into the night, as if she was still there. It was great.

She’d written a poem a few weeks before she died, based on a vision she’d had. Knowing that her life was ending became almost soothing for her, calming. Here’s what she wrote: 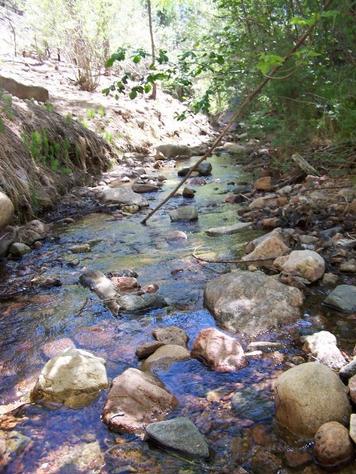 There is a River
It runs with so much love
In all of us
This River
It is so simple
That’s what I’ve come to:
The Simplicity
And there are only two ways to go
One is love
One is fear
The River is not just a little stream
It is the Great River of the Universe
I just want you all to know that
There is enough for Everybody
Just let the debris
Float Down the River
Let it Go

So here I was, 14 years later, back on Elizabeth’s mountain,walking by the stream that she must have been thinking about when she wrote that poem. The night before I’d slept in the parking lot of the resort where my friend had gotten married and now I was back in the place where my other friend had died. That’s the thing about living on the road, you just never know where you’ll wake up.

I am not really built for hiking. I sunburn easily. I sweat too much. My legs are too short. And, as we’ve previously established, I drink a lot of beer. Also, I am a very lazy man. I exercise mostly on a stationary bike, primarily because I identify with the name. Still, I wanted to hike up Elizabeth’s mountain, to see if I could find the cross. And, what the hell, I’d done it 14 years before, as did a bunch of her relatives who were older and feebler than me. How hard could it be?

The hardest part, actually, was finding the trail. And I’d have never done if Elizabeth’s brother, Paul, hadn’t e-mailed me directions. There was a place to park on Tesuque Canyon Road, just on the edge of the Santa Fe National Forest. There was also a sign warning that people shouldn’t leave valuables in their vehicles. Clearly, this did not apply to the Traipsemobile, which I parked directly in front of the sign. I packed a couple of water bottles, took a hat and some sunscreen and wandered up the path. 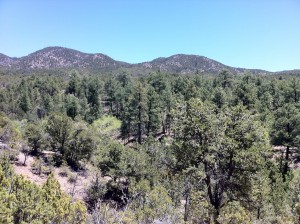 You walk maybe half-mile up the road, before you cross over the creekbed and onto the actual trail. There are barricades along the way, to keep you from wandering into rich people’s backyards, plenty of shade and a lot of other people on the path, people walking their dogs, joggers, locals taking a stroll. Heavy duty hiking, this is not.

Then it gets tricky, or at least it did for me. I knew that at some point that I had to hike up a hill, but I wasn’t sure which one. There are a couple of well-marked trails and one that felt vaguely familiar. So that’s the one I took. I’m pretty sure it’s the one I wanted.

Climbing a hill, even in perfect weather, turns out to be harder than riding a stationary bike. There are loose rocks and semi-steep rises and, let’s not forget, you’re already 7,000 feet above sea level. This is my excuse. It had absolutely nothing to do with me being fat and frequently full of beer.

But I kept going, stopping only once, when I found a suitable butt-sized rock, about halfway up the ridge. I hung out there for a while, looking over the canyon and the pine forest down below. There was scrub brush and blue sky and the only sound, other than my pounding heartbeat, was the wind. I can see why Elizabeth liked it here. It’s a good place to let things go.

I climbed to the top of a ridge that felt like the one with the cross. I was up there for at least an hour, wandering through gullies and charred wood. It was beautiful. It was peaceful. But I never found the cross.

It was easier going down, at least for my lungs. But the the laws of gravity are cruel. I went slowly, congratulating myself for not falling on my ass. Right before I fell on my ass. The rocks under my sneakers gave way, my feet went out in front of me and I found myself involuntarily seated. Planted right on my butt.

Elizabeth would have laughed if she’d seen it. So I laughed on her behalf, slip-siding down the rest of the trail and eventually back to the van. My valuables were all still there, including some ice-cold beer. But if someone had taken it, I’d like to think I’d have been fine. It’s all just debris, you know. You have to let it float down the river, You have to let it go. 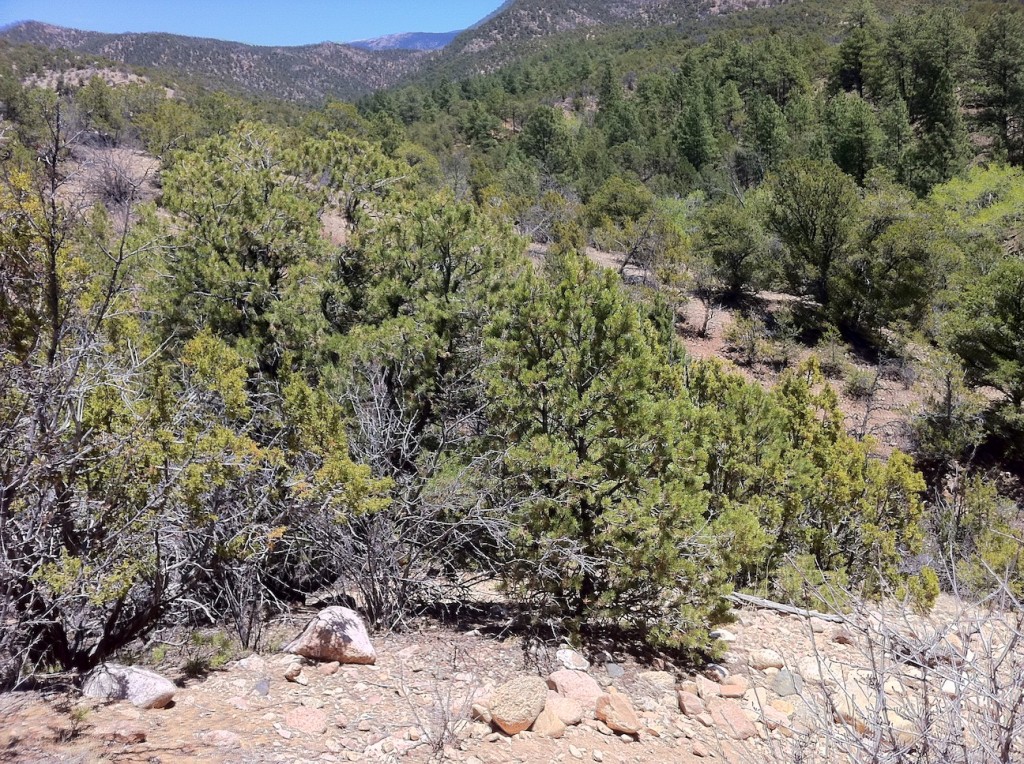 @BenGChase My rule, back in the pre-internet days, was that I would only buy gear from the place where I attended t… https://t.co/PWEP4zXKxS
- Saturday Oct 1 - 3:01am