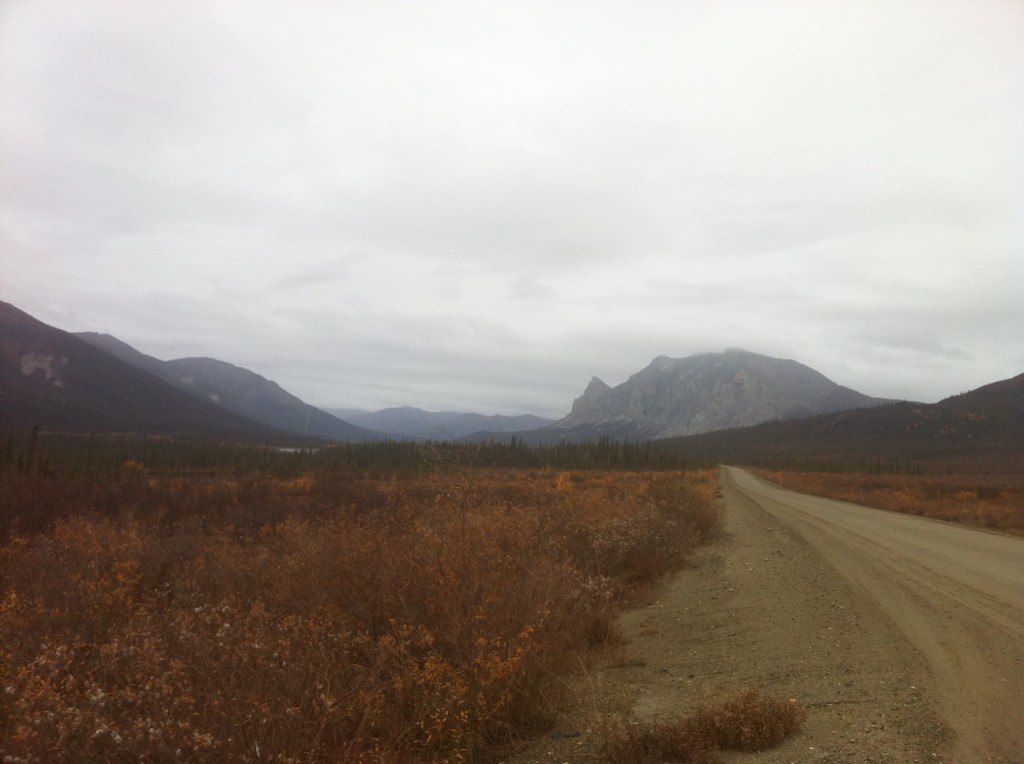 So where were we? Oh yeah, spending the night by the Alaska pipeline, 120 miles south of Deadhorse.

Which isn’t a real town, actually, in the sense that it did not exist before the North Slope oil discoveries in the 1970’s and the building of the Prudhoe Bay terminal and the pipeline. There was nothing up there but tundra and ice and caribou herds. This make sense because,  during the winter, the temperature is regularly at 50 degrees below zero, wind speeds can approach 100 miles an hour and – I swear this is true – the sun sets on November 24th and does not rise again until January 18. It stays completely dark for 54 days. Other than that, it’s lovely. 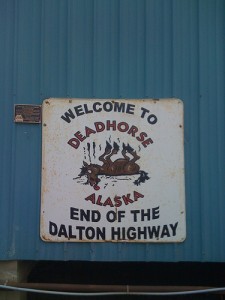 But once they started drilling and piping they needed a place for all the workers to live and for the supply trucks to get repaired and a general store to sell mittens and stroke books and such. The oil companies, who in exchange for making everyone rich, were given possession of the coastline and all the land around it – No, seriously, they OWN the fucking coastline –built their own private town. This is Deadhorse.

It’s a horrible, horrible place, all pipelines and gas flares and mud puddles, Satan’s winter retreat. Because the surrounding area is all permafrost everything is either built on stilts or on top of layers of gravel and it’s all just butt-ugly, as if a small town were built entirely of tool sheds. 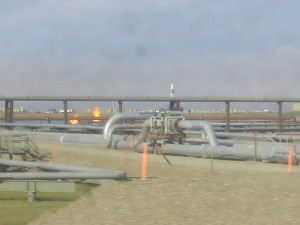 There are two “hotels,” owned by the oil companies, a “general store” owned by the oil companies and a tour bus company, owned by the oil companies. This last part is important because the only way you can get to the Arctic Ocean is on an oil-company-owned tour bus. Private vehicles aren’t allowed. So you pay them $15 for the privilege and also have to sit through an “orientation” meeting in which they tell you how oil is good and how they are very very careful not to fuck things up when they’re drilling, because they loved the environment even more than you do and, hey, if you’d let us get a piece of that Arctic Preserve, we’d drill the shit out of that, too and you wouldn’t even be able to tell the difference. 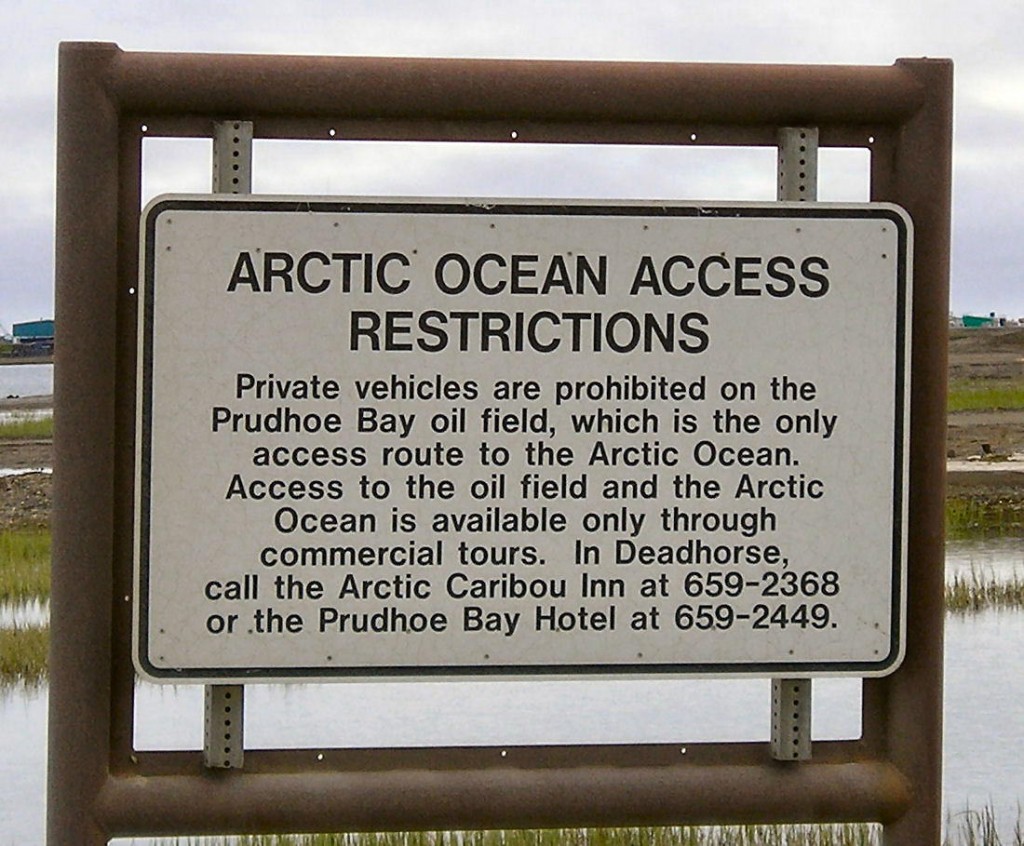 Then you get on their bus and, before they take you to their ocean, you have to stop and gawk at all the drilling rigs and pipeline arrays and they tell you a couple of cute stories about various employees that almost got eaten by polar bears. They never mention any of their employees who might have completely got eaten by polar bears, because this is Deadhorse and NOTHING BAD HAS EVER HAPPENED HERE, EVER!

Finally, mercifully, they take you to a little spit of gravel that juts out into the Arctic Ocean, as far north as you can go and still be in the United States. After that, it’s just the polar ice cap and then Russia and, no, Sarah Palin can’t see it from here.. Neither can we.

There were six of us on this tour, the very last one of the season. It was a Friday afternoon in mid-September and if I’d missed that bus, the next one wasn’t going out until the following spring. So, yeah, I cut it a little close. 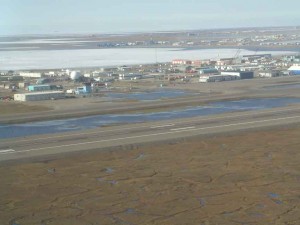 Besides me, there was a German couple who’d also driven up in an RV, only they’d come all the way from Argentina, a considerably more impressive accomplishment. They’d shipped the RV from Germany to Argentina, driven north to Colombia, had it shipped from Cartagena to Panama (cause you can’t drive through the Darien Gap) and then driven up the Pan American Highway into Canada and to here. Later on, I bought them beer. It cost them $3,000 just to get the vehicle from Colombia to Panama. And that, ladies and gentlemen, is why I’m not driving all the way to Argentina. (Unless I change my mind or get a lot richer.)

There were also three Ohio State students, two girls and a guy,  natives of Taiwan, who seemed awfully quiet for the bulk of the tour and who I thought maybe didn’t speak English. Then, when we got to the ocean, the guy stripped off  all his clothes and jumped in the water. “Happens all the time,” said the driver, who works for the oil companies. 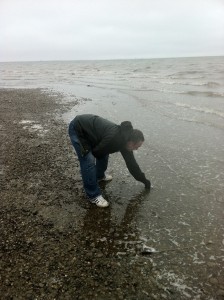 I took my $50 vial and, fully clothed, bent over and scooped up as much Arctic Ocean water (not owned by the oil companies) as I could, while the German couple snapped photos of me proudly displaying my tiny souvenir, a quarter cup of dirty saltwater that, as far as anyone could tell, I could have gotten from any pet store aquarium. I couldn’t have been more proud.

I spent a couple of nights in Deadhorse at the Prudhoe Bay Hotel, where everyone has to put-on booties when they enter, like NASA workers. Otherwise the place, which is pretty much a gigantic, mutant mobile home, would be caked in tundra mud and tar sands.

It’s a spooky place, which must be even spookier after winter and the 54-day darkness kicks in. It’s like a dorm, with a 24-hour cafeteria, hot meals served at scheduled hours but an endless supply of sandwiches and donuts available at all times. Half the residents when I was there were oil workers and half were hunters, who’d been out shooting caribou all day. So everyone but me was pretty much wearing either camouflage gear or orange jumpsuits. The only women were cafeteria workers and maids. It’s like prison, but without the pottery classes.

But, hey, you can have a latte, hang out in your own personal La-Z-Boy or watch television. There was a bow hunting channel on every time I walked into the rec room. I assume the only reason they’d have changed channels would be to watch “Deliverance.” 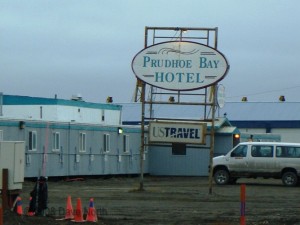 The drive back to Fairbanks was less traumatic than the drive up had been, because the weather was better. Except on Atigun Pass, where it was still snowing and down to 20 degrees. I passed some college kids, in light jackets, who were heading the other way and asking how much further it was to Deadhorse. I’d already been driving for 8 hours at that point. It was 3 in the afternoon. If they took my advice, they turned around. If not, their corpses will be visible in the spring.

By the time I got back to Fairbanks (and many beers at the Silver Gulch Brewing Company), the Traipsemobile was bouncing like a pogo stick. The Haul Road had taken a toll. Later on, I’d be told that I’d driven the last 400 miles with essentially no brakes and/or shocks. By then, I was so used to bouncing around that I’d hardly noticed. 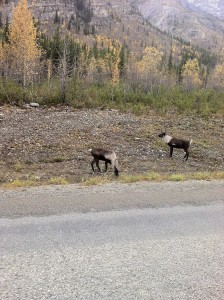 It was nearly October before I left Alaska, with new brakes and shock absorbers. After the Haul Road, the Alaska Highway seemed easy, but no less impressive. There were black bears everywhere, caribou, moose. Whitehorse, when I got there, seemed like an old friend. And driving into Edmonton felt like a kind of culture shock. So many people. So much traffic. All those buildings and stoplights and stores. It might as well have been Chicago or L.A. My sense of the world had changed.

I replaced a windshield in Calgary, headed east to Saskatchewan, where I took a right and crossed back into the United States. North Dakota was prettier than I expected, with millions of migrating ducks, rolling wrinkled hills that looked like the fur of a Shar Pei puppy and impossibly winding rivers, glacial remnants that looked like pieces of string that had fallen, delicately tangled, onto the floor. Beautiful.

But, even though I was in a place I’d never been, going down back roads I’d never driven, it wasn’t as satisfying as Alaska. The pavement was too smooth, the towns too frequent. The only animals visible from the road were horses and cows.. Driving across the Yukon and then to the Arctic Ocean may have spoiled me. For a while, anyway. 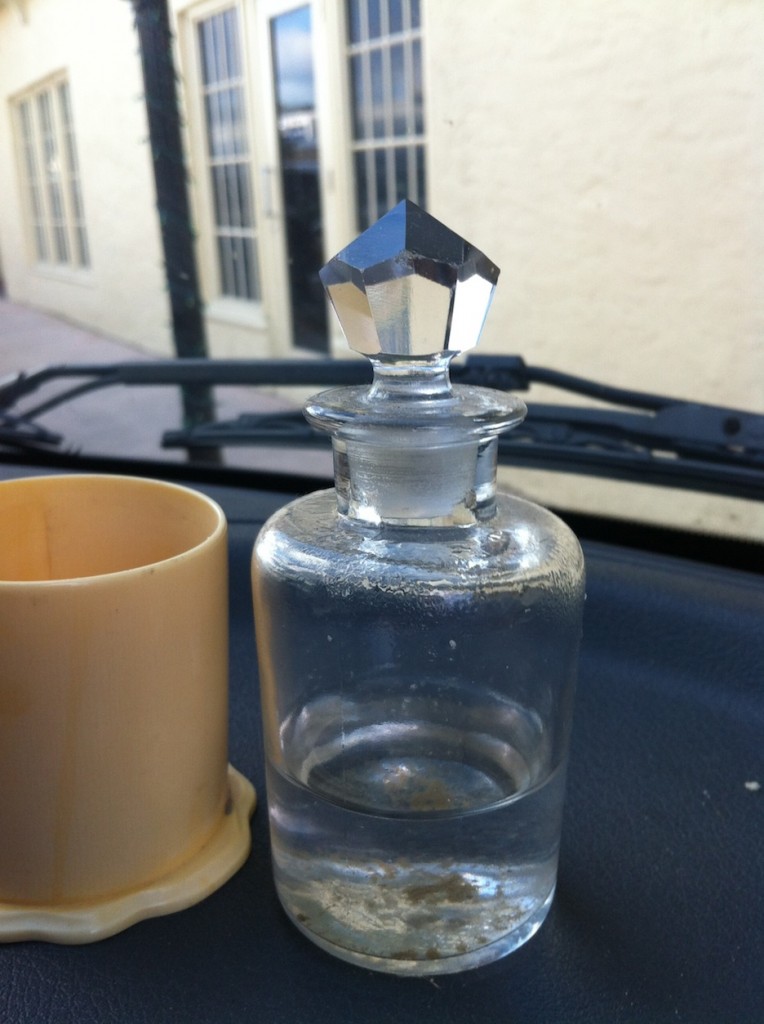