North side, South side

Home/Dispatches/North side, South side
Previous Next

North side, South side

So, where were we? Oh yeah, sucking those puppies down in LaCrosse, Wisconsin. 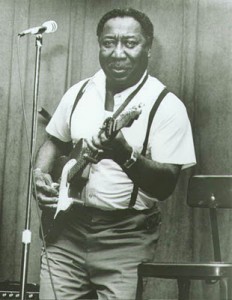 I  spent the night alongside the Mississippi River and then took the back roads east and south across Wisconsin, through Madison and Whitewater and, eventually down U.S. Highway 12 into Chicago’s far north suburbs. It was a Saturday night and I was in the mood for some electric blues. So I headed to Halsted Street on Chicago’s near north side.

Used to be the “real” blues clubs, the ones where you could get stabbed and everything, were all on the South Side and the white people who went there were considered very brave, unless they were in the Rolling Stones, which meant they could go pretty much anywhere they wanted because they traveled with their own bouncers. I never went to any of those clubs because I didn’t know anybody who knew anybody who could take me (in other words, a blues-loving black friend from Chicago) and give me an honorary “it’s okay, he’s with me” card. Also, it was the 70’s, I was young and stupid and not yet comfortable in actual guys-lurking-in-the alley urban environments. Much as anything, I didn’t know a safe place to park. So, pussy-ass little suburban white boy, I chickened out. Shame on me.

Pussy-ass little suburban white boys don’t have to worry about that anymore, because the “real” blues clubs aren’t stabberies anymore and, for the most part, they moved to the near north side. Some of them, like Buddy Guy’s “Legends” (which is actually closer to The Loop) are as much theme park as blues clubs, high-priced and tourist friendly. Souvenirs abound. 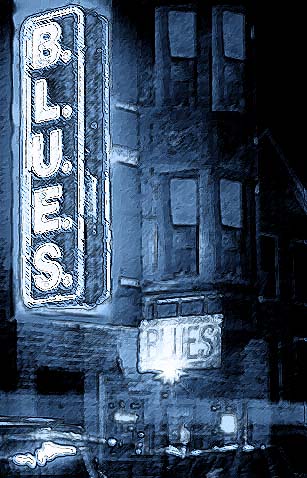 I’m not against this by the way. I want Buddy Guy to make a lot of money. BB King, too. They deserve it. Anything that makes the blues more accessible to a larger audience is a good thing. I may have grown up in Shreveport, but I didn’t listen to the blues when I was a kid. I listened to the Beatles and Top 40 and on-the-radio soul music. I wasn’t haunting black clubs or looking for Howlin Wolf records. (or, for that matter, going to the Louisiana Hayride. I was pretty much oblivious to ALL the music that was going on around me.) I had to work backwards to get there, like most of my other pussy-ass little suburban white boy friends. I heard Led Zeppelin before I heard Robert Johnson or Lightning Hopkins, the Rolling Stones before I heard Elmore James. It was the same thing with jazz. In college, I was listening to lots of fusion jazz and it took me years to work my way back from that to cool jazz or be-bop. I owned “Bitches Brew” years before I owned “Kind of Blue.” To me, as a kid, jazz was that Dixieland crap they played in the French Quarter tourist traps.

So, entry points are important.. And the more of them, the better. Which is why I’m glad the pussy-ass little suburban white boys and their pussy-ass little white girlfriends can go to the clubs on North Halsted and feel like they’re cooler than they really are, while paying too much for whiskey and t-shirts. Because the music is the real thing.

On most nights B.L.U.E.S., which is tiny and always jammed, has somebody famous or at least somebody who used to play with somebody famous. It opened in 1979 and, because it’s so small, comes closest to approximating the way things used to be (or so I’ve been told). But on a Saturday night, it’s all but impossible to get in and find a seat. I’m old.

Which is why I went up the block to Kingston Mines, which is a lot bigger, has two stages and  video monitors so that if you happen to be in the wrong room when one stage is in action, you can watch the band on tv. It sounds high tech, but the monitors are kind of shitty and the camera angles are akin to watching security footage from a 7-11 robbery. Somehow, this makes everything feel more authentic. Also they have Excellent red beans and rice. 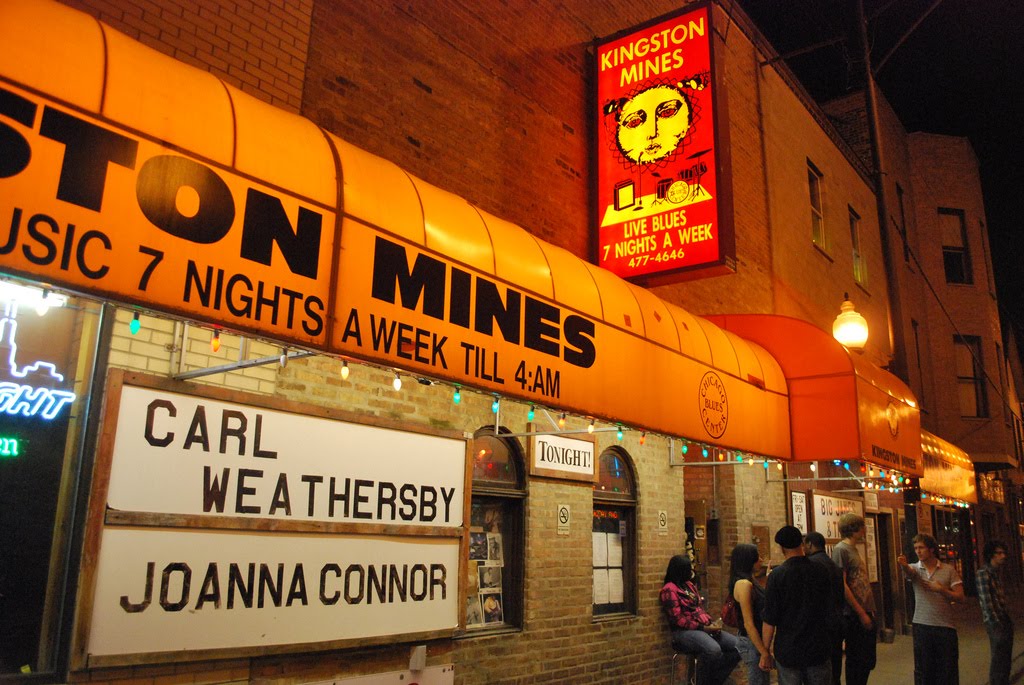 There are long communal tables, plenty of dance floor room and they stay open until 4 a.m. The emcee is a guy named Frank Pellegrino, an old blues shouter himself, who started out as a busboy there not long after the club opened in 1968. He’s short and gruff and works the room like an insult comedian. He wears his hat low over his forehead, tends to wear t-shirts with obscene phrases and, when he’s on a roll, is this weird combination of Chuck Barris and Howlin Wolf. I enjoyed him immensely and sort of hoped I’d get to see him toss someone out of the joint, because I knew that he’d be really good at it. 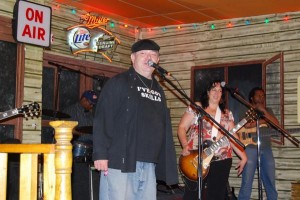 Joanna Connors was on one stage, Carl Weathersby on the other and I spent most of the night wandering back and forth, full of red beans and beer, between the two of them, making my way through clusters of college kids and bacheloreete parties. The crowd got blacker, and better-dressed, as the night went on. Lots of people had very nice hair. It was still jammed at 3 a.m., when I surrendered, walked back down Halsted St. and went to bed.

I hung around Chicago for a couple of weeks, visiting old friends, a couple of whom live in Hyde Park, by the University of Chicago The Museum of Science and Industry and, in case you didn’t know, President Obama’s neighborhood I’d never spent time in that part of the city before, but now that I have, I can see how it suits him. 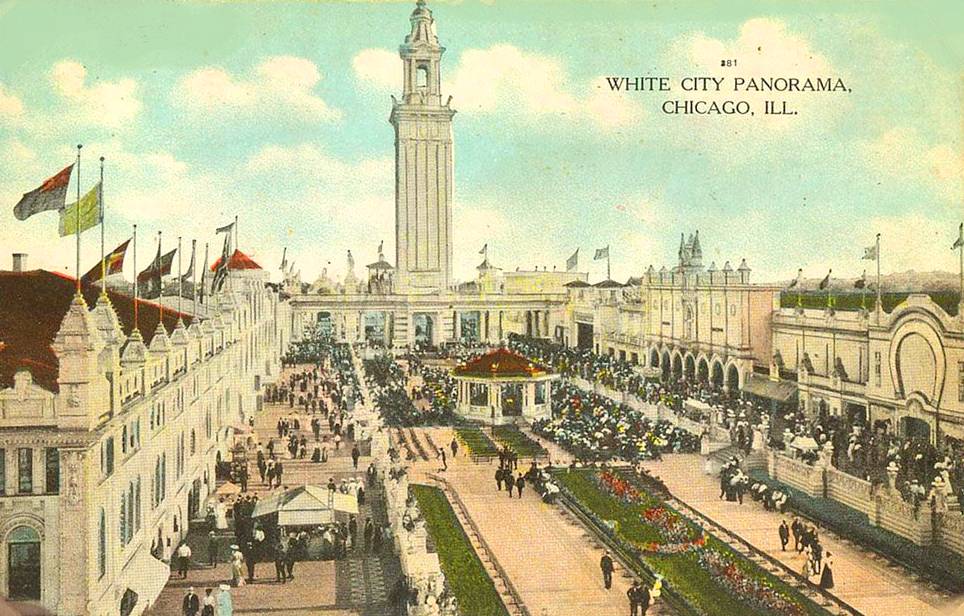 Postcard from The World Columbian Exhibition, 1893

It’s low-key, for one thing, lots of old unassuming duplexes that, when you get a little closer, are more impressive, elaborate entranceways, dark wood floors and staircases from when they were built in the 1920’s or before. There are Frank Lloyd Wright homes sprinkled in here. And then, closer to the University of Chicago campus, is the Midway that was home to the 1893 Chicago World’s Fair (The one in “Devil in the White City”) and, even with the buildings long gone, is still impressive. When people make references to the old Chicago Bears being the “monsters of the Midway,” this is the midway they’re talking about. 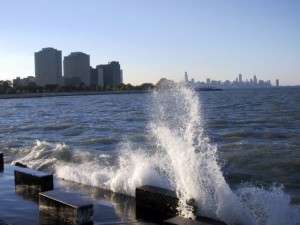 The view from Promontory Point

It’s also right by Lake Shore Drive. Promontory Point is a great place to take in Lake Michigan and Chicago skyline to the north. How did I not know this before? Possibly because I was a pussy-ass little suburban white boy?

But, to me, the big landmarks aren’t the key to Hyde Park. It’s that it’s such a mixed community, lots of bookstores and cafes that are a natural outgrowth of being near the University of Chicago. And lots of blue-collar, hardware-store kind of places, too. It’s a real neighborhood, as varied as any in Chicago. And this, I think, is why it suits Obama. You can talk to professors and plumbers with the same amount of ease, here. It’s an urban academic neighborhood, but it’s also a place that feels gritty. A little bit tweedy, a little bit blue-collar,  not an ivory tower kind of place. Mitt Romney wouldn’t be comfortable here.

But Obama was, and is. He still shows up at Valois, his favorite breakfast joint, whenever he’s in town and orders bad-for-you sausage-and-eggs combos in the cafeteria-style line. Now they have breakfast specials named for him and souvenir coffee cup available. The biscuits are terrible. But the crowd is funky. Lots of guys in work shirts with their names on them. Lots of arguing. Big-city stuff. 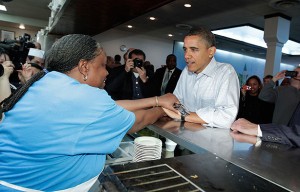 I don’t know that he’s ever been to Jimmy’s Woodlawn Tap, but I can’t imagine that he hasn’t, considering that it’s half a mile from his house and it’s been considered the coolest bar in the neighborhood since the 1950’s. Saul Bellow used to drink here. Margaret Mead. It’s dark in there, all black paint and mahogany. People eat cheeseburgers and drink beer and talk about economic theories and stuff. How could he not have been in here?

(By the way, although the bar is officially called Woodlawn Tap, everyone here calls it Jimmy’s because it used to be owned  by a guy named Jimmy Wilson, who ran it from 1948 until he died in 1999. Ask for directions to  The Woodlawn Tap and people will stare uncomprehendingly. Ask for “Jimmy’s” and everyone knows where it is.). You will not be shocked to learn that this was my favorite place in Hyde Park. 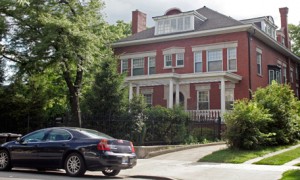 I tried to get a look at the President’s house, but the 5000 block of South Greenwood Avenue is now blocked off by large concrete barriers and a whole slew of heavily-armed SUV’s and squad cars. I slowed down enough to wave to them. I’m sure the data banks were humming as I drove past. Somewhere, in a control room hidden up the block, some Secret Service technician was saying, “Stand down.. Other than being a moron, the subject represents no threat. He had Pop Tarts and beer for dinner.”

Still, I thought it was odd that, a few moments later, I turned left from Hyde Park Blvd onto Berkeley Avenue and was waved down by a woman who, borderline hysterical, seemed to be having some sort of engine trouble. It was raining. She was distraught. I had to stop. 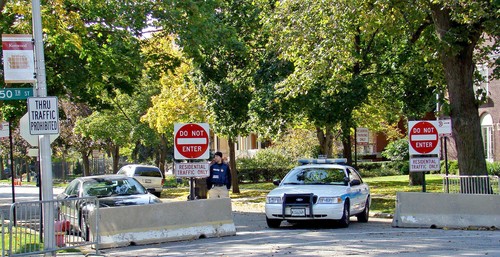 She and a friend were trying to jump start her car, she said, but they couldn’t figure out how to align the jumper cables in a way that didn’t send out sparks. I’m not good at anything mechanical. It’s a wonder I zip my own pants. Still, I did what I could.

Anyone who knew what they were doing would have immediately seen that she had the positive and negative cables clamped on incorrectly. It took me three explosive tries to reach this conclusion. Still, eventually, the car started. She and her friend thanked me (and my friend Merry Beth, my tour guide for the afternoon) and drove away.

“That was a lucky coincidence,” Merry Beth said, remarking on the fact that we happened to turn the corner just as the woman had needed our help.