Home/Dispatches/Paralyzed in Pensacola
Previous Next

So, where were we? Oh yeah, sipping tequila in Key West at midnight on New Year’s Eve.

I didn’t know it at the time, but I was about to spend the next three months floating around Florida alternating between being sick and  attempting to force myself into writing the “Bernie” story for The New York Times, the same story that I’ve been “trying to finish” for a year and a half, with no success. I booked myself into various guest houses and cheap motels around North America, (remember the Huxley house in Taos, the cabin on Whidbey Island, the guest room in Edmonton?) convinced that if I just stayed in one place for a week or so I’d get the story done, even though I had no firm deadline. It should have been obvious to anyone – most of all me – that this, much like a land war in Asia, was a strategy doomed to fail

Self-delusion can be useful. It’s what allows me to believe that my pants are falling off because I’ve lost weight and not because my belt has come to regard my low-hanging gut as an insurmountable obstacle. It’s what keeps New Gingrich on the campaign trail, saying hilarious things. It’s what allows me to believe that I am on a great adventure, as opposed to just driving around in circles because I have nothing better to do between now and the day I die. What, too dark? Pretend I never said it. See? Self delusion. Ta da!!

I left Key West with a fever, which followed me for a while. It came and went and mostly I attributed it to the humidity or perhaps some kind of gator pox. I’d feel shitty for a couple of days, hunker down in the van and start to feel a little better. Just a cold, I assumed. Nothing a little Thai food and lots of beer couldn’t cure. 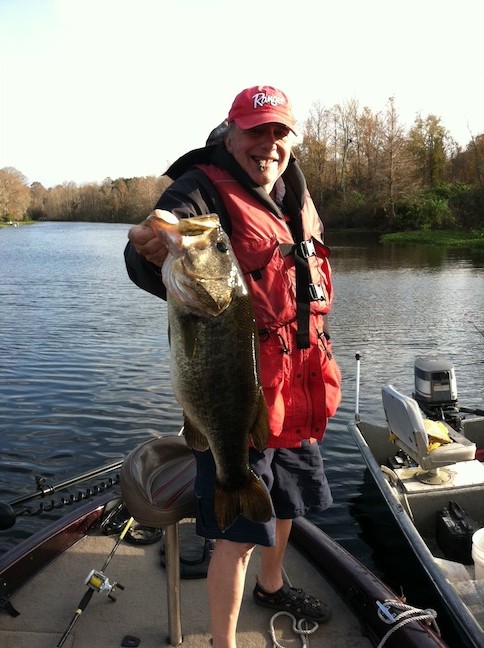 I applied this method in Orlando and then Tampa. St. Petersburg and then Panama City. Every once in a while I’d feel up to exercising or taking in a show. I went to see Gregg Allman play in Clearwater, hooked up with my old folk singing buddies Hungrytown (and their awesome Sportsmobile Sprinter, The Blue Meanie in New Port Richey and, best of all, stumbled across Bobby Bare Senior at The Florida Sunshine Opry in Eustis, which is a backwater town about 40 miles northwest of Orlando.

Bobby was there to do some bass fishing on Lake Panasoffkee, at the mouth of Big Jones Creek,  which got him on the front page of the local paper, holding up a gigantic largemouth, (12.2 pounds) but with absolutely no mention of him being a famous country singer. The story was about the fish, not him. I’m guessing he preferred it that way.

So, probably  since he couldn’t go bass fishing at night, he decided to play a local gig. The Sunshine Opry, which is tucked up behind Friendly’s Ice Cream and next to the Big Lots, is a giant metal shed, just waiting to be blown away by the next tornado that comes through town, with a stage dressed to look like a barnyard —  a barnyard with silver glitter and garlands draped all over it. In the weeks after Bare played, headline acts included Tommy Cash (Johnny’s brother) and a country comedian named Johnny Counterfeit. 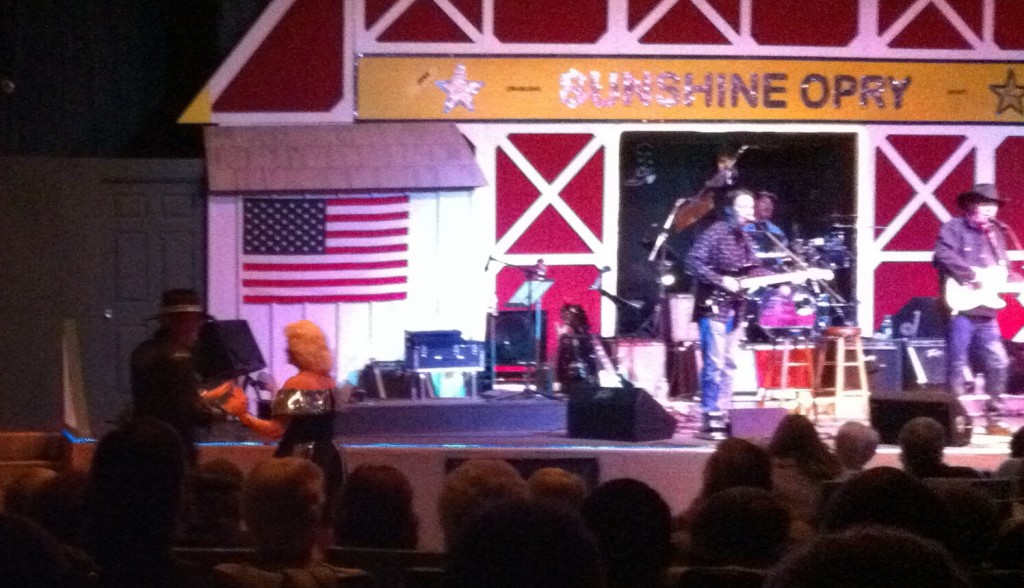 The dancing couple at the Florida Sunshine Opry

The crowd, mostly 65 and older, seems to be local folks who come every weekend, whoever happens to be playing. There’s one couple, in their 80’s I’d guess, that two-steps to every song that comes over the p.a. He’s got a bad leg and has to sit down between every song. She’s got a big spray-can-yellow hair and silver spangles on everything that can possibly be spangled. They whirl around a lot. Then they rest. I’m sure they’re very much in love. And will be dead before Memorial Day.

Bobby Bare was great, kind of don’t-give-a-shit cantankerous and a little gimpy-legged himself. But he sang “Dropkick Me Jesus Through The Goalposts of Life” and “Marie Leveau” and “Detroit City” and “Tequila Sheila” and told inappropriate stories to a lot of people who probably didn’t expect to hear so much cussing right there by the Big Lots. I loved it.

But the Damned Cold kept coming back, making me achy and tired and, worst of all, not in the mood to drink beer. That’s when I knew it was serious and got myself to a doctor in Tallahassee who gave me a bunch of antibiotics and told me I’d probably had a low-grade infection for the better part of a month. 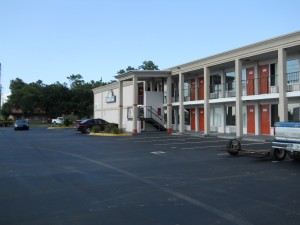 Which is why I checked into the Days Inn in Tallahassee, where I stayed for the next 10 days. I told myself I needed a couple of days to recuperate and THEN I would tackle the story. I’d been slogging around North America with all the notes– the hundreds of pages of court transcripts, the photocopies of other stories about the murder and the trial, the interviews I’d done, the photo albums  of the freezer and the house and Bernie and Aunt Marge on assorted cruises – stuffed into The Traipsemobile’s forward cabinet. Every time I opened that cabinet, usually to re-direct the tv antenna, those notes stared back at me, a sliding pile of paper , growing more chaotic over time,  a physical manifestation of all the work I was avoiding. A pile of guilt and shame.

I took the notes into the motel room, laid them out on the desk and then refused to look at them for the next 10 days. Instead, I watched many, many episodes of “Storage Wars.” Okay. Fair enough. I was waiting for the antibiotics to kick in, right? And, besides, there was no deadline. And Tallahassee, believe it or not, was a fairly pleasant place.

There was, for instance, the Black Dog Café, which is tucked up behind an American Legion Post on Lake Ella, a 12-acre lake not far from the Florida State campus, surrounded by small cabins that have been there since the 1920’s. Before that it was known as Bull Bond and, among other activities, was a popular place for Black Churches to conduct baptisms. Now the cabins are filled with funky shops, including the Black Dog. It’s got a back deck facing the water, is filled with students and professors and a turned out to be fine place for not writing. 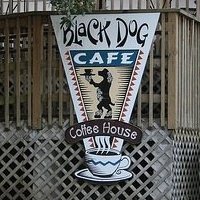 Clearly, Tallahassee was the problem. So I checked out of the Days Inn and drove over to Gulf Shores, Alabama, where there was a cheap condo for rent right on the Gulf of Mexico, nothing to distract me but gentle waves and sugar-white sand. I stayed there for a week. I smoked cigars. I watched sunsets. I didn’t write a word.

Clearly, Alabama was the problem. So I went back to Florida, but just barely. I got myself another room at another Days Inn, this time in Pensacola. And I swore I wouldn’t leave until the damned story was done. I was there for two and a half weeks. 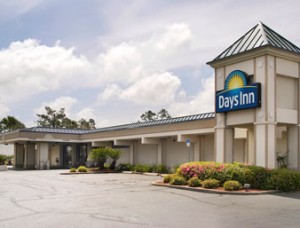 At the end of the first week I got the word that, finally, a release date for “Bernie” had been set. The movie was supposed to be released a year ago, last fall at the latest. And if the movie had come out a year ago, I’m sure I’d have written the story a year ago. But every time the release got delayed, the urgency went out of my need to write. No deadline meant no chance of me actually doing the work. Unless there was a date certain, at which point I would be humiliated by NOT having written the story, there was almost no chance of me writing it.

You know how this ends. The deadline came. I panicked and cursed myself and spent 3 or 4 days in the Pensacola Days Inn considering suicide – or at least a debilitating self-injury – as a viable alternative. There were many pizzas. Many more episodes of  “Storage Wars.” Many days of the maids at the Days Inn wondering if maybe I’d like them to clean the room, which was cluttered with pizza boxes and those hundreds of pages of notes, scattered all over the place.

I sent a note to the editor, saying I’d have the piece in by the end of  February I didn’t actually turn it in until  March 9. I spent most of that last week dreading the phone call or e-mail demanding to know why I hadn’t submitted the piece. The call never came.  I wrote the last sentence at 3 a.m. and, mostly to avoid the torture of reading the story one more time, I immediately sent it in.  With 16 years to do the research and more than a year to write, I had once again waited until the last possible minute. This is how it has always been. I don’t study for the exam until the night before the test. I stay up all night. I collapse when I’m done, just after promising myself that, next time, I’ll do things differently. But, of course, I never do.

Here’s the hilarious irony: I assumed the deadline was three weeks earlier than it actually was. So I didn’t hear back from the editor until late March. It was agonizing. I was convinced that he hated the story and just hadn’t found a way to tell me. Or maybe they weren’t going to tell me at all. Maybe they were just hoping that if they ignored me long enough, I’d get the hint and slink away. Which I decided was probably the best thing to do. Thank God I live in a van. I could easily swallow the shame of it all and just disappear.

Except they didn’t hate the story. They didn’t even edit it that much. It comes out this weekend and they seemed to like it enough that they want me to write for them again. Which is great , because I was beginning to wonder  what I’d do with myself if I didn’t have work to avoid. 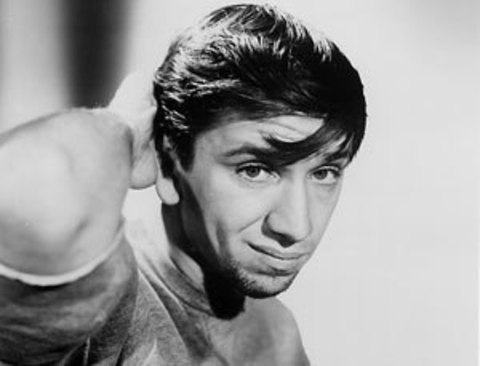 @deepseadiverbnd @Steven_Hyden He should have been there. You guys killed it and Diane Coffee -- about whom I knew… https://t.co/qXYLx0l9vJ
- Monday Sep 20 - 8:37pm