So where were? Oh yeah, Dallas, where the weather was too hot and my blood pressure was too high.

I have solved both of these problems. Through the wonders of modern pharmaceuticals I now have the blood pressure and cholesterol numbers of a much younger, thinner and less self-destructive man. Also, I stopped having pizza for breakfast.

More importantly, I got my ass out of Texas, a place I dearly love as long as it’s below 90 degrees. Those days, at least until October, are gone. And so am I. 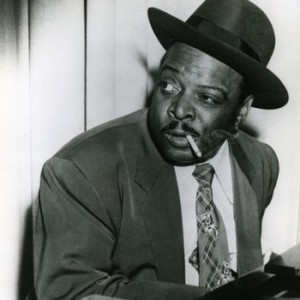 It took a while to get to a cooler temperature zone. Oklahoma City was still too hot. Wichita was still too hot. Kansas City was still too hot. But I hung around for a little bit anyway. Cause I love Kansas City, which has always been a funkier, cooler town than most of America realizes. It’s not just a place to eat barbecue (although Arthur Bryant’s deserves all the praise it gets). It was the edge of America for the longest time, a gathering place for cowboys and mobsters and jazz musicians. (Coleman Hawkins! Charlie Parker! Count Motherfuckin’ Basie!!) For whores and pimps and assorted nee’r-do-wells. Chicago got all the glory, St. Louis, easily reachable by riverboat, got the press and eventually that big-ass Arch, but Kansas City was the real frontier. Go find a recording of “Jumpin’ At The Woodside” right now. St. Louis didn’t come up with shit like that. (Although, to be fair, they did give us Chuck Berry.)

When I was in college, Kansas City was also the easternmost place in America where you could buy Coors beer, which was still an exotic almost-mythical thing, a supposedly wondrous nectar that all of us had heard about but few had actually tasted. So we didn’t know it was pretty much pisswater brewed by right-wing assholes. And we were in college, so we didn’t really care. Every couple of months someone would take up a collection, take off for a 16-hour round trip to Kansas City and come back to Peoria with a trunk full of  Coors. We later figured out it wasn’t worth the trouble and getting drunk on Heileman’s Old Style was just as much fun and a whole lot cheaper. 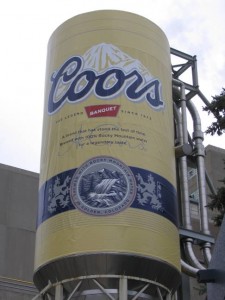 But I digress. Although not by a lot, my point being that I’ve been enormously, gloriously, hilariously drunk in Kansas City on a number of occasions, most significantly on February 22, 1980 when I was part of a crowd officially estimated at “twice as many people as this place can hold” at Kelly’s Westport Inn, the oldest standing building in Kansas City, famously open 24 hours a day (back then) and the perfect place to watch the U.S-Soviet Union Olympic hockey game, the “Miracle On Ice” which was, to my knowledge, the only time in history when traveling Canadians were pretending to be from the U.S. and not the other way around.

We were in there until 4 a.m., back-slapping strangers and pretending, just for a night, that we actually gave a shit about hockey. As we staggered out of the place, the morning drunks – guys who would stay until after the sun rose – were staggering in. The circle of life.

I lived in Kansas City for a while, a couple of months in the early 80’s, bunking with my friend Patbo, who was training for a life of sacrifice and service, teaching kids in inner-city schools. He actually did this for a couple of years, teaching in Compton and Watts, but then he realized it paid a lot better to be in show business and he was slightly less likely to get shot. So now he teaches movie brats for a living, which is a different way of saving the world. Because of him Christina Ricci  — not to mention all of the Spy Kids — can read their contracts. Not that they actually do.

Patbo lived in a run-down brick apartment building a few blocks from the Uptown Theater, a neighborhood that was not in the best of shape. The architectural style was mostly “early crack house. “I slept on a mattress in the living room, but occasionally on the queen-sized waterbed with Patbo and his girlfriend. I know. It was there that I thought I’d experienced my first earthquake. No, not that. A car slammed into the apartment building at 3 a.m., knocked off a significant chunk of brick and masonry and, as I recall, was left there for several days.

But – and this is my actual point, forget all that other stuff – I mostly love Kansas City because it is the home of the greatest basketball tournament in America. Or what used to be the greatest tournament, anyway: The NAIA Men’s Basketball Championships

It’s a small-college tournament for schools that aren’t in the NCAA, of which there used to be quite a few. Lots of branch campuses and bible schools. Most significantly, the NCAA had no interest in admitting predominantly-black colleges into its ranks until the late 1970’s, shamefully late. So schools like North Carolina Central, Grambling and Virginia Union went into the NAIA, which welcomed predominantly black colleges in 1953. And the first integrated team on record played in the tournament in 1948.  The team: Indiana State. Their coach: John Wooden.

So did most of those other little schools that now fill those conferences you never hear about until it’s “Championship Week” on ESPN. Campbell. Bellarmine. Kearney State, Ohio Wesleyan, Gardner-Webb. The NCAA has swallowed most of them up now. But I’ll bet they had more fun then.

Because the NAIA tournament isn’t spread all over the country. The top 32 teams come to Kansas City for a six-day death match. To win the tournament, you’ve got to win five games in 6 days, including two in one day. The first games start at 9:30 a.m. and the last ones go past midnight. That’s 48 games in 5 days. If you go, you should take lozenges. 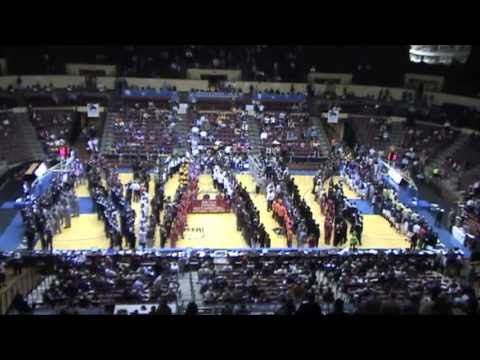 This is the real March Madness. All those teams, their cheerleaders, their mascots, their fans , their pep bands jumbled together in one place. The hallways are filled with players in brightly-colored warm-ups, sleepy-eyed in the morning, bleary-eyed late at night. All those colors, all those silly hats. All those screaming coaches. And crying cheerleaders. It’s like a political convention. It’s like Alice in Wonderland. If Comic-Con were a basketball tournament, this is what it would  be like. And the costumes are better here. 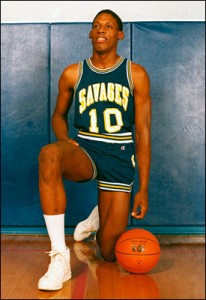 The NAIA Tournament is where I saw Dennis Rodman play for the first time, leading the Southeastern Oklahoma Savages to  the semifinals. It’s the first place I saw Scottie Pippen, playing for Central Arkansas. It’s also the first place I ever saw teams warm up for a game during halftime of the preceding game. And where, for the first and only time, I saw a team called the Boll Weevils (Arkansas-Monticello) and a team called the Ichabods (Washburn College). God, I loved that tournament. I should go back some time. Maybe next March,  when it won’t be 90 damn degrees.

So I didnt stay long this time through. Long enough to drink some beers  for old time’s sake at Kelly’s Westport Inn and to take in a Southern Culture On The Skids show at Knuckleheads. After that I headed for St. Louis, where I hoped the weather would be cooler. And, as is my tradition, to take a piss on that goddam arch. 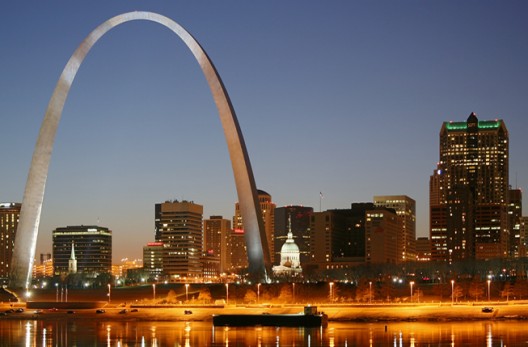